New Attractions to Bloom at Brown Hill Farms this Year

In: Family Destinations
With: 0 Comments

(Also published in Farm to You)

As the agricultural landscape continues to evolve in Northern Pennsylvania, current operators of a family farm started in 1868 have taken a creative approach to farming that includes a growing number of family-friendly activities. Brown Hill Farms in Lemon Township, Wyoming County, is part of a burgeoning new market called agritourism.

The term has different meanings in different parts of the world and, as it begins to take hold in the Endless Mountains of Pennsylvania, its definition continues to evolve. Primarily, the concept involves attracting visitors to a working farm or ranch for an experience that might elude them elsewhere.

Starting with sunflower fields in 2017 and adding a pumpkin patch and corn maze in 2018, Scott and Michele Brown have colorful new plans for 2020. They will open new tulip fields to guests in mid April.

“We were looking for something to do in the spring,” Michele explained, “and we don’t want to do what other people are doing.”

After visiting a tulip farm in Massachusetts, she sent an email to a Holland-based tulip farm to learn more. As fate would have it, the tulip bulb sales representative from Holland was visiting farms in the United States. Two days later, when he wrapped up business in the Hazleton area, he headed north, calling Michele when he was about two miles from Brown Hill.

“He was very encouraging and very helpful,” Michele related. The rep visited Brown Hill again during planting time, taking soil samples and helping the Browns identify 60 varieties that would grow the best on their farm.

Michele once owned Reese Florist Shop in Tunkhannock and ran a bridal boutique up to the time that sunflower fields and pumpkin patch had proven themselves viable. “I had always had an interest in flowers,” she said.

Of the 360,000 tulip bulbs planted, Michele designed 24 specialty gardens that will feature combinations of tulips that she hopes will work especially well together. Guests can expect waves and bands of color stretching out far and wide in 600-foot by 40-inch rows with walking paths in between.

“People just love to take pictures in these fields of flowers,” Michele stated. The Browns have found a new sense of satisfaction in the happiness of those who visit their property.

Seeing the farm anew through the eyes of youngsters who are simply agog at everything that grows, as well as each artistic twist the Browns are able to bring to their operation, reminds them that family farms are a vanishing swath of the American fabric. When school groups visit, teachers tell the Browns that many of the students have never before been to a working farm.

The tulip fields will peak from April into May. Fifteen acres of sunflower fields start attracting visitors in August. The pumpkin patch and corn maze will be open from September to October. A menagerie of friendly animals, including specialty cows, goats, sheep and chickens, are always on hand for petting and feeding. Visitors can shimmy through hay bail tunnels or take part in yoga classes when scheduled.

In between the prime tourists seasons, three generations of the Brown family are busy raising corn, soybeans, potatoes, tomatoes, peppers and hemp. Scott and Michele, their son Jacob, and Scott’s parents Phil and Janet live in two houses on the farm. They also rent and work fields throughout Wyoming County and sell the produce at wagon stands along routes 29 and 92 in Lemon Township, along Rt. 29 in Eaton Township, and onsite.

But it is agritourism and seeing families having fun on land that has been in the family for more than 150 years that has the Browns looking to the future with a smile. “As people are leaving, they thank us for opening our farm to them,” Michele related. “They appreciate the effort we put into to it to make something special.”

Looking back on the years they hesitated to make a move in such an untested direction, she said, “I had no idea that people would pay us to walk through these fields. I would have retired from the bridal shop years ago had I known.”

Brown Hill Farms is located at 405 East Avery Station Road, Tunkhannock. To keep up with the Browns and follow their progress with each growing season, check out Brown Hill Farms on Facebook or call 570-241-8430. 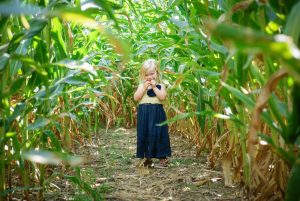 Through a child’s eyes, a walk through a cornfield takes on a mystical context. 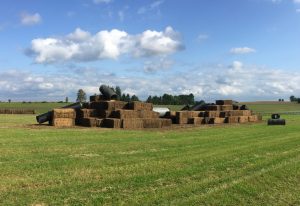 Giant hay bails and drain pipes make for an interesting game of chutes and ladders. 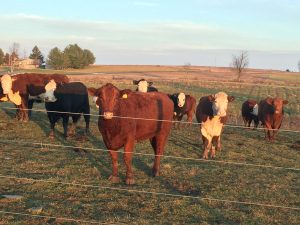 Cows are among many domesticated farm animals waiting for visitors at Brown Hill Farms. 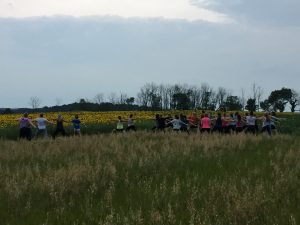 Experience Earth, sky and zen during a yoga class at Brown Hill Farms 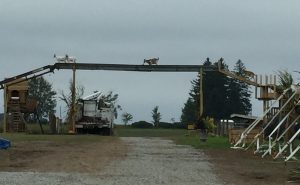 Visitor-friendly goats get their own playground at Brown Hill Farms. 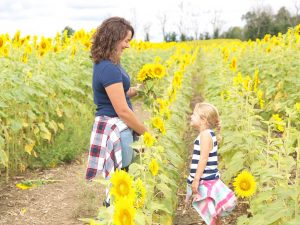 Brown Hill Farms is designed to be enjoyed by multiple generations together.