In: Veterans, Veterans Affairs
With: 0 Comments 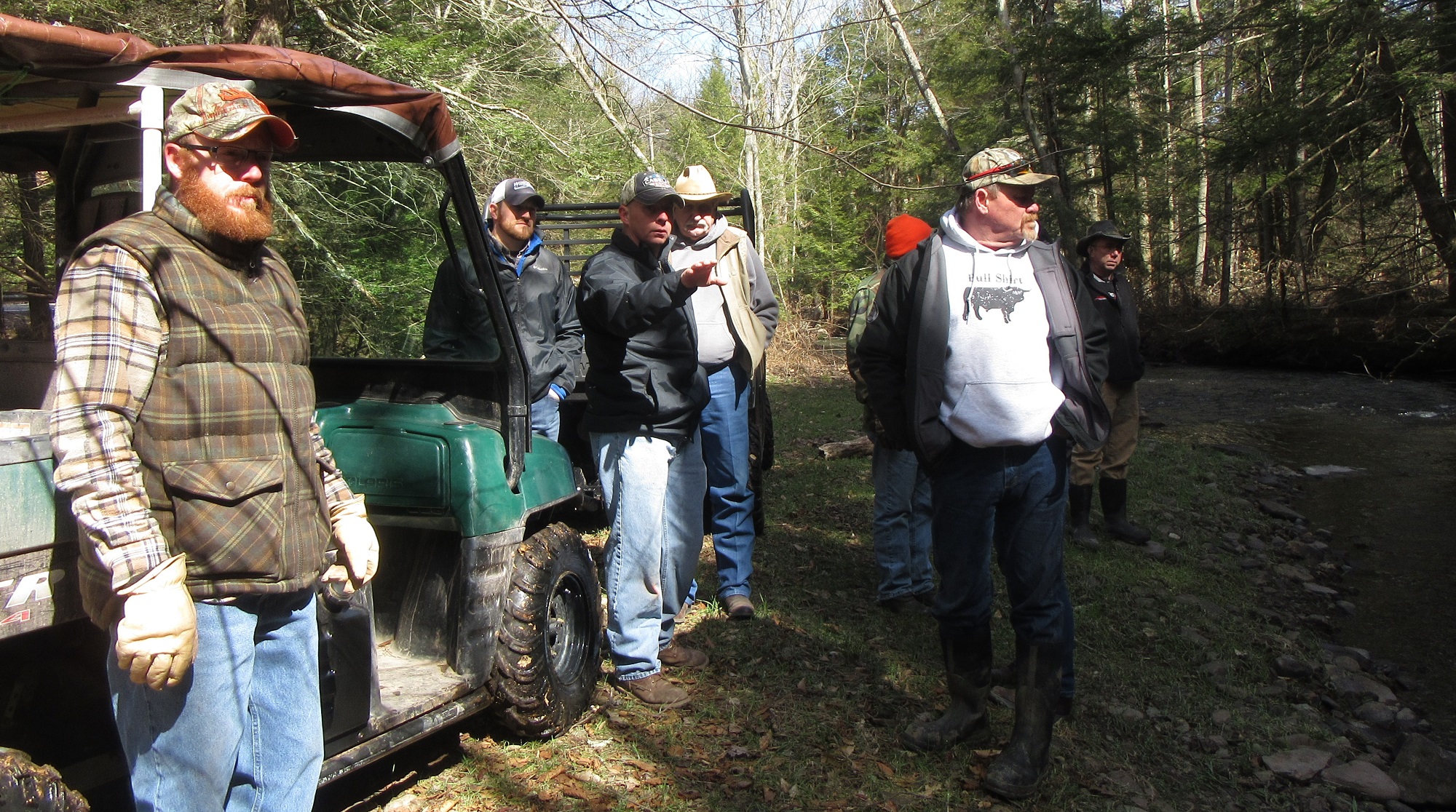 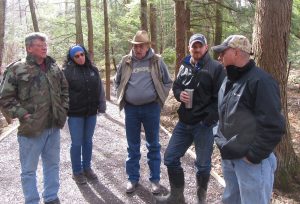 Jeff Swire (top, center) gives the lay of the land for this weekend’s “Fish for the Fallen” at Patriots Cove to volunteer mentors (from left) Ben Hubbell of Noxen, John Pittenger of Tunkhannock, P.J. Burgess of Black Walnut, Dave Thompson of Montrose, Pete Hatton of Camptown, and Larry White of Wyalusing. (Above) Swire prepares (from left) Pete Hatton of Camptown, Tammy Bonnice of Montrose, Burgess, and Pittenger for this weekend’s adventure.

A new venture backed by Hunts for Healing will provide an opportunity for about a dozen veterans to enjoy the first day of trout season in an environment created especially for them. Patriots Cove, just south of Noxen in Wyoming County, has been constructed with veterans of varying abilities in mind. Wheelchair–accessible pathways lead to docks from which the anglers can cast their luck along Beaver Run, just off Route 29.

Patriots Cove is the brainchild of Noxen native Jeff Swire, who purchased about 18 acres of land and three quarters of a mile of creek frontage. At the center sits a new lodge that will eventually house visitors and serve as a meeting place, much the way the lodge at Ringneck Ridge near Springville does for Hunts for Healing clients. Swire is a 24-year army veteran, retired Sgt. First class, whose service included a stint in Iraq that left him with a permanent injury.

Swire thanks Hunts for Healing for extending their tax–exempt, non-profit status as an umbrella for the new project. On April 7, he conducted an orientation of volunteer mentors who will work with veterans already registered for opening day of trout season. Swire will rely on them not only to ensure that participants enjoy the recreational experience on their own terms, but also to provide feedback that will help the camp grow.

In addition to the volunteers, who come from various walks of life, Swire credited numerous local businesses and individuals for donations of materials or money. Many of them will be on hand on April 14 to help disburse equipment, shuttle the special guests up and down the stream, and to prepare food during the course of an event that has been dubbed “Fish for the Fallen.”

One of those companies is Williams Midstream, about a dozen employees of which participated in a Day of Caring at the site on March 29, spreading mulch and gravel and helping with stream and trail improvements. Three Williams employees, John Pittenger, Dave Thompson and Tammy Bonnice, will serve as mentors on April 14.

“I was excited to get involved,” said Bonnice, who serves as Williams’ public outreach coordinator. She credited Pittenger for procuring a $2,500 donation for Swire to apply to the purchase of supplies through the pipeline company’s Homegrown Giving program, which has provided support in the past for first responders and environmental initiatives. “When John brought Patriots Cove to our attention, it sort of touched on all of those avenues,” Bonnice related.

Though the veterans will have the site to themselves all morning, a public event in the afternoon will be open to the media and involve some local elected officials. The veterans will decide whether or not to participate or to continue to fish undisturbed, downstream from the lodge if they prefer.

Swire maintained that he does not want those registered for the angling experience to feel that they are props or part of a spectacle. “But we do want to welcome the community to Patriots Cove to show them what we are doing here,” he explained. A memorial service will be conducted at 1:30 pm to honor veterans and fallen firefighters.

Patriots Cove is on private land, and the organization has arranged to have the stream privately stocked with about 150 trout ranging from 12- to 16-inches, including some palominos. There are also some native trout in Beaver Run, of which Swire wants to maintain a record as part of an environmental study of the impact of the project on the watershed. Swire obtained a DEP permit to have water quality tested and to make needed improvements to the stream, and he is satisfied with the improvement he and his team have made.

“It was sick,” he said in reference to high amounts of phosphorous and low levels of dissolved oxygen in the water. Two septic systems that were leaching directly into the waterway have been pumped out and collapsed, and several waterfalls were constructed to increase aeration. Swire is counting on the pools below each waterfall to be teaming with trout.

“We want to create a sustainable fishery of native brook trout and an ever-improving healing environment for our veterans, first responders, and caregivers,” said Swire’s daughter, Katie who, along with her mother Melissa, coordinates logistics and matches incoming veterans with mentors.

Due to the amount of planning required for the first event at Patriots Cove, no additional veterans can be accommodated on April 14. But there are many more events to come, Katie promised. “Many wounded warriors face physical, emotional, and spiritual struggles,” she stated, “and we hope to promote lasting healing by reconnecting with nature and empowering with a purpose.”

Readers interested in opportunities at Patriots Cove, including volunteering and making donations can follow Patriots Cove on Facebook, visit www.PatriotsCove.org online or send an email to patriotscove@gmail.com.

2018-04-12
Previous Post: Big Changes Underway in Downtown Laceyville
Next Post: Wyalusing Ahead of Others in School Security