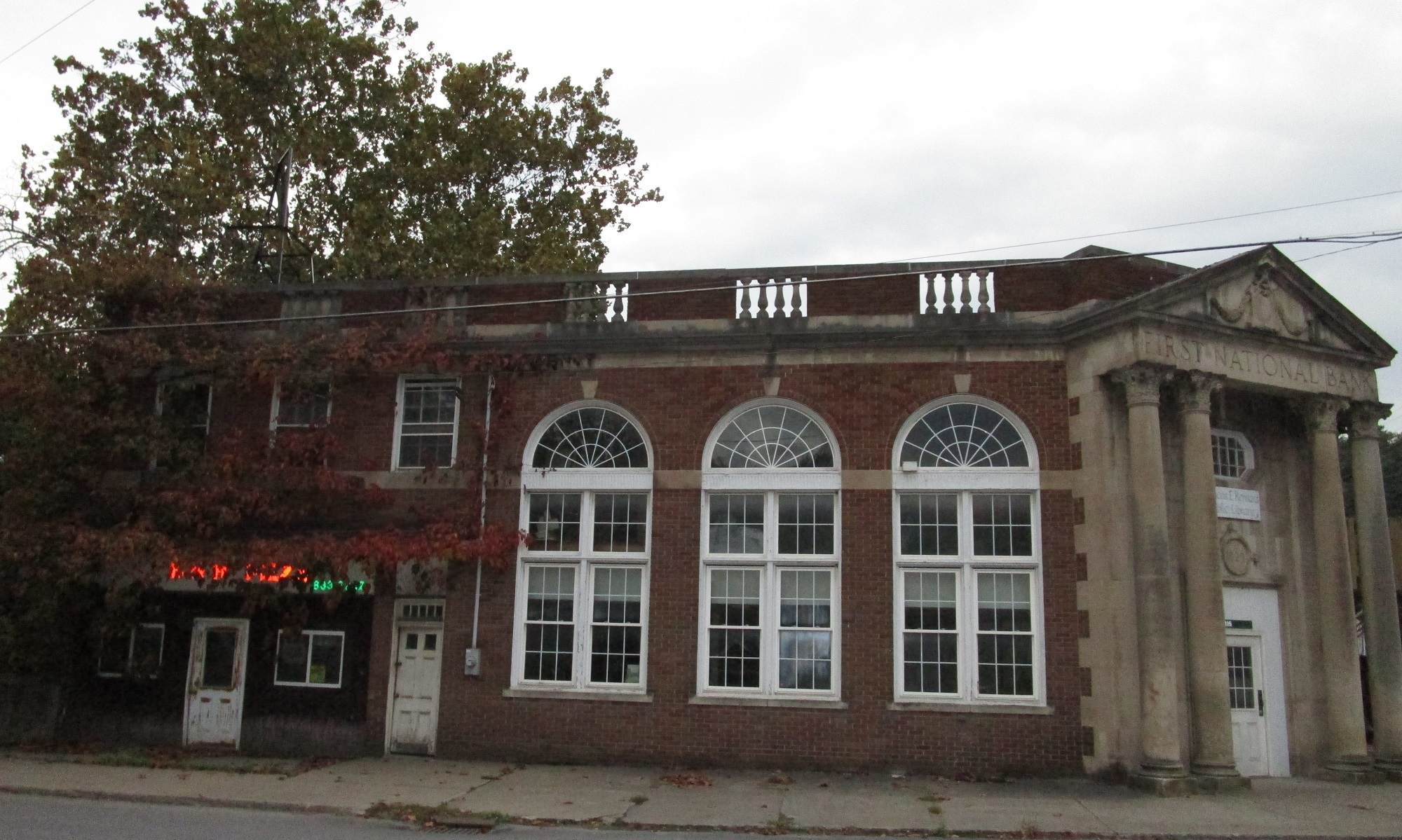 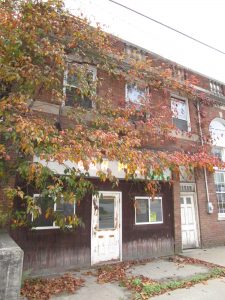 It’s easy to see why some people believe that the structural integrity of the former bank building in Meshoppen that was most recently used as a library could be compromised by the demolition of the old pizza shop when one looks at the buildings’ shared facades and the ornamental railing on both roofs.

The homes that were part of a flood buyout project that has dragged out over the past three years should be gone by the end of 2019, according to the Wyoming County commissioners, who met in a regular public session on Tuesday morning at the courthouse in Tunkhannock. The low bid of $125,000 from SRI (Smart Recycling, Inc.), an excavating contractor from Dunmore, had been accepted by the board of the Wyoming County Housing & Redevelopment Authority (H&RA) on Sept. 25.

The work must begin quickly, commissioner Tom Henry related, as the Community Block Development Grant (CBGB) dedicated to the work expires at the end of the year. The structures include homes on both Church and Allen streets in Meshoppen that were purchased from families and landlords and since vacated.

Nothing will be happening anytime soon, however, on the other side of Meshoppen Creek, where two buildings along Bridge Street that served most recently as a pizza shop and public library will remain standing for the time being.

The first meeting between the county commissioners, Meshoppen Borough council members, and H&RA representatives on Sept. 19 had been eye-opening for all involved in that each participant brought something new to the table. At the subsequent meeting held on Sept. 26, it appeared that what was needed was X-ray vision, a super power that nobody at the table possessed.

H&RA officials held on to the most recent engineering report that suggested a party wall between the two buildings would make dismantling just the pizza shop too risky and therefore much more expensive than taking down both buildings simultaneously. Borough representatives maintained that earlier studies had determined that, not only did the two buildings have separate exterior walls, an addition fire wall had been constructed between them.

At the first meeting, H&RA and the commissioners asked Meshoppen Borough to try to work with the Library Association for an agreement to convey their building to the borough so both could be demolished together. At a special public meeting held in Meshoppen on Sept. 25, Herb Smith informed the council that the Library Association intended to continue to accept bids on the building through Oct. 14, which made such an agreement impossible.

“We want the building to be used,” Smith stated. “There are several people interested in it.” Smith did not know at that time what any prospective buyers might do with the former library, which closed in June.

Public sentiment, at least that voiced on the “You Know You’re From Meshoppen If…” Facebook page, suggested that townsfolk did not want the old bank building, which many consider one of the town’s last structurally sound historic buildings left standing to be torn down.

Borough council member Mike Voorhees also expressed frustration over the fact that the H&RA was able to find an excavation company to tear down the homes on Allen and Church streets for $125,000 but could not do any better on the projected $300,000 price tag for the demolition of the pizza building.

“I still don’t understand how they can tear down half the town for less than it will take them to take down the pizza shop,” he remarked.

The council passed resolution 2019-04 that permitted for the removal of the pizza shop only at whatever cost the county would incur via H&RA funding sources, taking that and a letter from Herb Smith with them to the courthouse the next day. Not surprisingly, their decisions were met with dismay by the commissioners and H&RA officials and board members.

“As of today, there is no more conversation with the Library Association,” H&RA solicitor Atty. Jami Hearn declared. “If they are not in right now, we will not be able to accommodate them in this project.”

Meshoppen Borough council president John Bunnel and borough solicitor Atty. Jonathan Foster stood by the Library Association’s decision. “The library didn’t know that this project was coming. Neither did we,” Bunnell said, in reference to Hearn’s disclosure at the Sept. 19 meeting that the H&RA preferred to remove both buildings simultaneously. 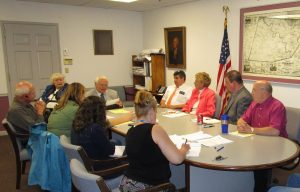 “It’s a viable building,” Foster noted of the old bank building’s structural integrity. Additionally, a new furnace and windows were installed after the 2011 flood. “And if the Library Association only gets $1,000,” he added. “they will put it toward a scholarship.”

The suggestion that the Association could hold up the demolition plans over a thousands dollars struck a nerve with the H&RA people and sparked an idea in Foster. If the borough were to promise to offer the Library Association more than the highest bid, he suggested, would the Association relent?

The meeting took some unusual turns as the three lawyers – Hearn, Foster and county solicitor Atty. Paul Litwin III – first stepped out of the room for a separate meeting. Subsequently, the H&RA board members present asked if they could confer briefly in another room.

When they returned, H&RA board president Stacy Huber announced that the board was against the proposed expense for taking down just the pizza shop. Fellow board member Ed Kintner concurred, stating, “$300,000 is a waste of our money. We’re tax payers too.”

At that point, an executive discussion was requested and granted, clearing the room of anyone not directly associated with the three parties, as well as Redevelopment Authority grants administrator Lisa Hahn. While reporters and the others waited outside the board room, members of the Library Association were contacted one more time. And, once again, they chose not to relinquish control of the library building.

Bunnell contested the $300,000 estimate on the grounds that the former pizza shop is a wooden structure, while the bank building erected in the 1920s is steel and concrete. He again cautioned them that whatever outfit is contracted to take down the pizza building is going to have a harder time separating it from the bridge over Meshoppen Creek, as they share a sidewalk.

“It doesn’t make sense to me either way,” Bunnell said, shaking his head. “You’re going to have to build some kind of wall along the creek to keep everything from falling into it.”

Hearn, H&RA executive director Danielle Powell and Hahn still seemed ready to move forward with the demolition of the pizza building with Hearn saying that $300,000 was probably available if they moved extra money from other H&RA projects. But she could not guarantee the commissioners that demolition would not exceed $300,000 if the workers encountered unforeseen issues.

Henry and the other commissioners, who agreed they wanted the building down, didn’t like the odds.

“It would put the county in a very hard spot if we were not able to complete the job,” he stated.

“If we don’t get this done in six months, we’ll all lose a lot of money,” Litwin agreed.

It was decided to adjourn the work session and consult with the engineers a final time to see if any agreement could be reached to cap the total cost. Everyone agreed to reconvene on Monday at 10:30 am.

“I’m hoping that the engineers will have better insight on this, and they will come back with a good prognosis that there won’t be any damage to the library,” Henry remarked. And if not? “There’s a good chance the commissioners will put a stop to this project.”

Monday morning’s meeting came and went with nobody from Meshoppen present. The commissioners opted to scrub the demolition plans for the time being and give Meshoppen Borough an opportunity to apply for different funding to get the job done in the future. Hope remains at the county level that the Library Association will turn their building over to the borough.

At Tuesday’s commissioner’s meeting, the official announcement was made that “the cost had become astronomical and the risks insurmountable.”

The commissioners made and carried a motion to put the $54,000 earmarked for the demolition three years ago back into H&RA’s general fund for housing rehabilitation at the agency’s discretion.