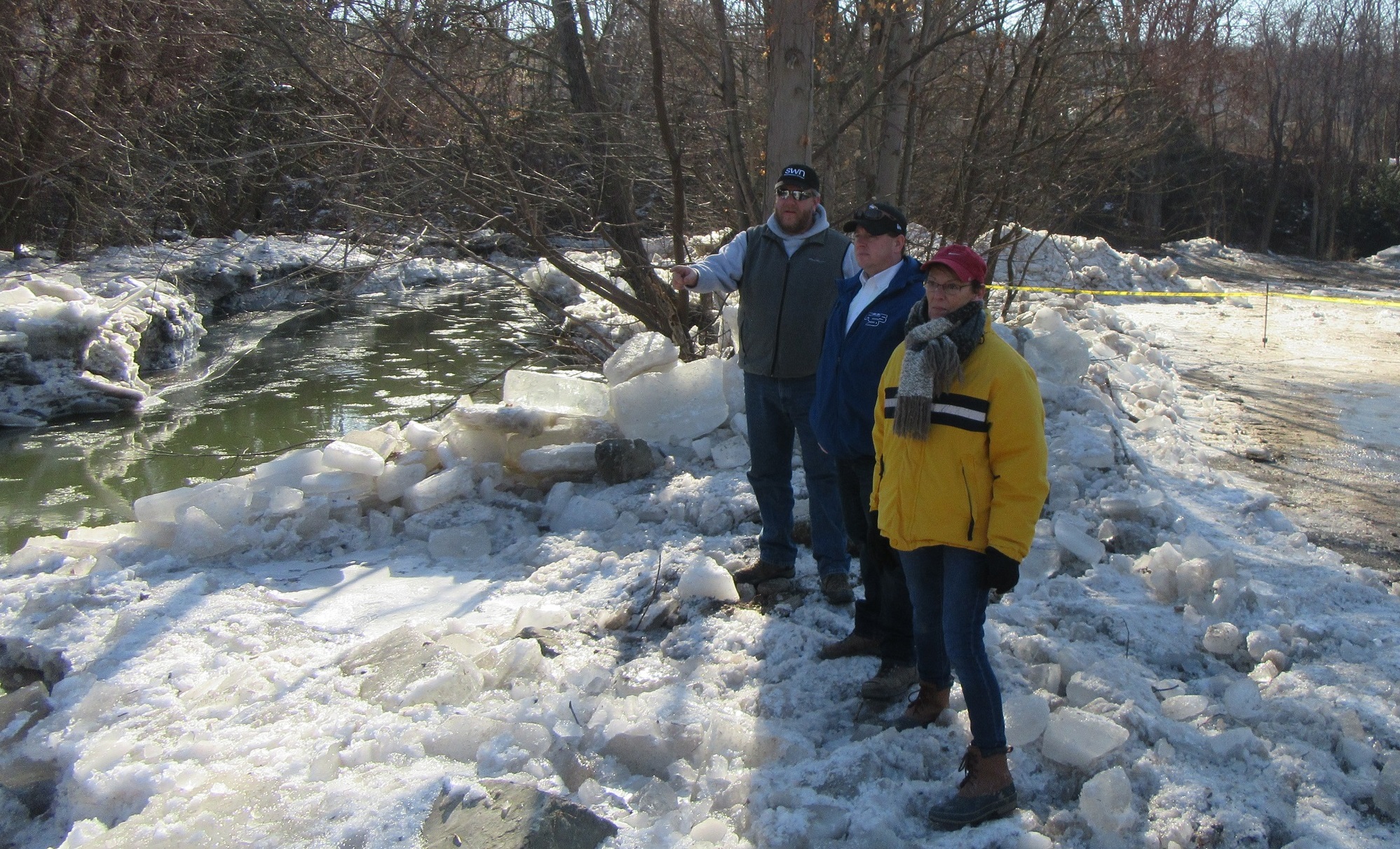 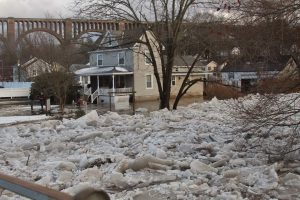 The borough of Nicholson in northeastern Wyoming County could have sustained major damage and incurred substantial financial distress on Jan. 23 when an ice jam in Martins Creek started to flood the town (above). Nicholson borough council president Dawn Bell (top, foreground), mayor Charles Litwin (center) and SWN production manager Dave Bowman review the process of how the ice jam on Martins Creek was dissolved from a point along Water Street close to where the water was allowed to flow away from town.

While a crew from SWN (Southwestern Energy) was breaking for lunch at Germana’s Pizzeria in Nicholson just before noon on Jan. 23, a potential disaster was unfolding in a relatively small stream nearby. Temperatures had risen into the 40s that day, and rain that fell overnight was unable to soak into ground frozen solid during a cold spell.

“Everyone starting noticing that all of the ice had lifted up to the bridge in under an hour, and the water was backing up,” said Dave Bowman, production supervisor at SWN’s regional office on Route 92, where the employees returned and told him of the unusual situation. 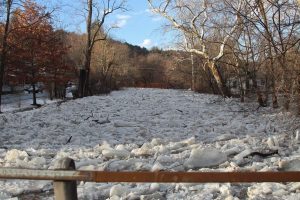 Within an hour of that, normally tranquil Martins Creek, which meets Tunkhannock Creek on the south side of the borough, was overflowing its banks and stretching out onto Water, Williams, Oak, Market, and Walnut streets towards homes and businesses. Nicholson United Methodist Church was also in the path of the rising waters and thick chunks of ice.

Bob Thorn drove south from Susquehanna County, where he was met by PennDOT Wyoming County assistant maintenance manager Manny Menendez, who had stopped first to check on potential flooding along Route 6 in Tunkhannock Township.

It was clear that the creek was clogged with ice and that the water had nowhere to go but backwards and higher. According to Menendez, PennDOT granted Dziak’s request to close Route 92 over concerns that the bridge at Martins Creek might be compromised.

Penn Dot also responded with a crew and a Grade-All excavator. “We attempted to start breaking up the ice jam. It worked momentarily, but it backed up again,” said Menendez.

“PennDOT had some machinery here, but it couldn’t reach out into the creek,” Bowman concurred. The dire situation would require collaboration that is customary in the gas fields, when energy companies rely on local businesses for support. Bowman put in a call to Bill Ruark of Meshoppen Stone to see if he had a long-arm excavator available.

“They are difficult to find. There aren’t too many around,” Bowman said of the excavator and its 75-foot extension. Ruark was away on vacation but took Bowman’s call and quickly had his son, Ryan Ruark, on the task of moving the needed machinery from Lawton to Nicholson.

The two hours it took to bring in the excavator seemed like an eternity to Bowman, Dziak, and Nicholson officials like Bob McClain, the borough’s emergency management director. But it also gave them time to coordinate the efforts of a growing army of volunteers.

“Within an hour, SWN was mobilizing equipment, resources and people to help us in any way that we needed,” recalled Nicholson mayor Charles Litwin. In the meantime, the water was rising about three inches per hour, and the scope of the crisis was becoming more grim with each passing minute. Water was surrounding homes and flooding basements. “We were looking at a major financial disaster.”

Additional fire companies arrived with pumps and worked side-by-side with Nicholson firefighters to empty basements, including that of borough council president Dawn Bell. The influx also brought people with specialized skills, like logger Ben Ryan of RHL Companies of Montrose, who removed a large sycamore tree just downstream that was seen as a hindrance.

Smaller pieces of equipment provided by Harold Luther and Sabuacak Excavating still proved valuable, as they pulled the heavy buildup of ice away from the creek banks.

“Without these guys, we would have been screwed,” Bell stated matter-of-factly three days later, as several of those most heavily involved in the incident reconvened along Water and Williams streets for a debriefing.

“The goal Tuesday night was to relieve the pressure off town and give the water a path to run for the night,” said Bowman, adding that it was a “now or never” situation. 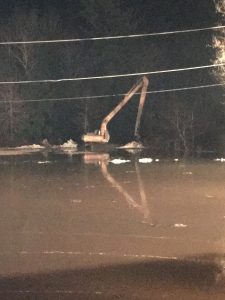 Finally, as midnight approached, the operator of the long-arm was able to punch through a wall of ice and allow the water that was unable to reach Tunkhannock Creek to flow across a relatively flat empty expanse behind the Methodist Church where homes stood prior to a 2004 flood.

“We freed that last bit of ice, and the water moved through like a freight train,” Bowman remarked.

“Had that not happened, we would have water onto Main Street by Wednesday morning,” Litwin stated.

“Within minutes, the water level in town dropped two feet,” Bowman recalled. “We weren’t even sure the next morning where it all went.” Nonetheless, no major rises were reported downstream, which was a serious concern for the contractors and emergency management officials throughout the ordeal.

Bowman called the crews off at midnight, but they returned at dawn on Wednesday to find their channel blocked and the water slowly rising again.

“The creek was being stubborn,” said Dziak. 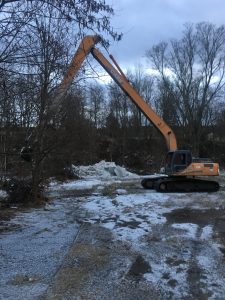 Workers wasted no time cutting a series of breaks into the ice jam, which now also fully involved Tunkhannock Creek. Temperatures were plummeting, and the frozen debris was becoming harder to move all the time.

The work continued through nightfall on Thursday, Jan. 25, when the decision was made to widen a channel in Tunkhannock Creek off the end of Factory Street that the churning water was already carving, diverting the stream into a natural overflow bed on the far side of a small island. Dziak was in communication with DEP throughout the efforts and relaying the successes Bowman and his ad hoc crew were having in diverting the crisis. 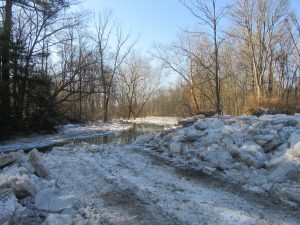 “A key piece of the puzzle was the gas industry stepping up,” said Dziak, citing SWM, Cabot, and Williams among the major players. Dziak was also grateful for the commitment of PennDOT’s Bob Thorn. “He stayed with us through the entire event.”

For Bowman, suspending some of the company’s operations during a time of crisis was a natural course of action. SWN’s Tunkhannock Branch office is just west of Nicholson on Route 92, and the company employs a number of local residents, including recent graduates of Lackawanna Trail High School.

“These are our citizens and neighbors,” Bowman stated. “We weren’t going to let them get flooded out.”

As of Jan. 26, officials were grateful that no residences or businesses took water into the first floors and were relieved by near normal water levels in the two creeks. But neither were they resting on their laurels. 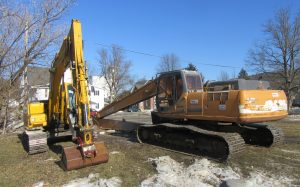 Another thaw and some rain were in the forecast for the weekend, and nobody was sure how stable the walls of ice still lining the creeks would remain under those conditions. Given the uncertainty, the long-arm that saved the day and another excavator remained at the ready, and residents were keeping their wary eyes on the streams.

“We couldn’t have had the outcome we did without these fine folks,” Commissioner Henry said of SWN, Williams, Cabot, PennDOT and all of those who helped them. “I’ve gotten so many calls from the citizens of Nicholson thanking us for being out there, but the credit goes to them.”

Henry said that the weekend had given him time for reflection on the community effort and the crisis that was diverted.

“People often come down hard on the gas companies, but they are such an asset to the county,” he remarked. “Nicholson could have been devastated, and we would have come to work on Monday, scrambling to figure out how we were going to pay for this. They made what we do so much easier. They were amazing.” 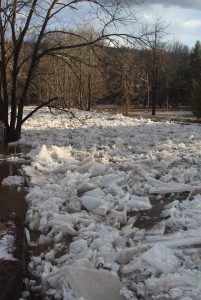 The backlog of ice was preventing Martins Creek (foreground) from flowing properly into Tunkhannock Creek, though both were bank-full at this point. 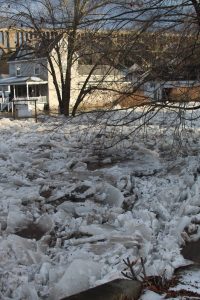 The famous Tunkhannock Viaduct at Nicholson can be seen in the background when the town was still under seize by tons of ice (above) and again after the ice had been moved into piles (below). 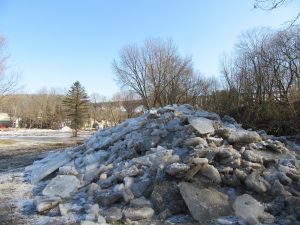