In: jennifer jenkins
With: 2 Comments 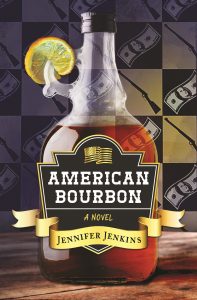 American Bourbon, a lively piece of fiction written by Jennifer Jenkins about a family of moonshiners in the Blue Ridge Mountains of Virginia, will be published on June 1, 2021 by Northampton House Press. Jenkins, a Tunkhannock native, spent many years directing and writing plays before expanding her repertoire to magazines and literary reviews. American Bourbon is her first, full-length novel, though initial reviews indicate that it certainly will not be her last.

The story literally starts with a bang – actually a series of them – as an illegal moonshine still under investigation explodes on a mountainside, catching the attention of nearly everybody in the nearby town of Touraine, as well as a couple of federal agents.

Distillery owner Caleb McKinsey is keenly aware of what is happening, as his own heritage is steeped in the illegal production of liquor. His late wife helped him form Bourbon Sweet Tea, a legitimate operation in Touraine, to dissuade further investigations into the illegal still that he holds onto as a time-honored hobby.

Caleb’s company employs a lot of people, and he has made his mark on the town with donations to various local causes. But Caleb’s hardcore demeanor and family reputation wins him few fans among townsfolk. A life of hard living has led to some health issues, and Caleb would like to pass the business on to his three adult children. The problem is that none of them will speak to him, nor to each other for that matter.

Most of the action takes place in rural Virginia, except for a few heart-pounding chapters that happen in New York City, where siblings Mack and Brigit McKinsey are clearly out of their element. But they have begrudgingly called a truce to go find their brother Kieran. Despite the fact that Kieran has grown to look like his father, neither he nor his siblings have much in common with Caleb.

Laurie Lowenstein, author of Death of a Rainmaker, describes Jenkins’ freshman offering as a “spirited tale of fury, whiskey and grief.” Tony Ray Morris, who wrote Deep River Blues called the cast of characters “evocative” and “as strong and flinty as the Appalachia hills from whence they came.” And, much like a screenplay, the dialog is so tight that the reader is drawn in to the often contentious rhetoric and becomes an unwitting keeper of the family’s secrets.

Jenkins cites a visit some years ago to rural Virginia, when she was given a private tour of some stills and the tunnels that were used to ferry illicit liquor to neighboring counties during Prohibition, as a key inspiration for the book and the town of Touraine. But she was equally enamored by the history of Irish and other immigrants bringing their recipes to America and using whatever was available to them to make whiskey.

“Bourbon is purely American whiskey. Sometimes the government gives us a great gift, as Congress did in 1964, when it decreed that, in order to call it bourbon, it must be produced in the U.S.,” she explained. One of the first distillers known to make any type of bourbon, she noted, was George Washington in Mt. Vernon, Virginia.

The story also explores how differently alcohol affects individual lives. Caleb would be nothing without alcohol. Mack’s passion for bourbon eclipsed that of his father and led him on a road to sobriety. Brigit takes drinking in stride, whether it’s getting her into trouble or inspiring her, Jenkins noted. “The daughter is the one with bourbon in her veins, looking farther than even her own father can into the future of the company,” she stated. 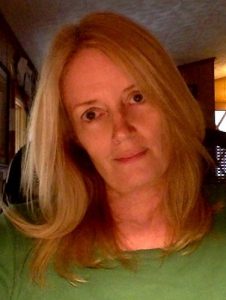 Jenkins is a college writing instructor, and she passes on her love of literature and storytelling to aspiring young writers. She looks forward to promoting American Bourbon nationally, focusing on cities in the Appalachian region. Jenkins also hopes to conduct a number of author events closer to home, including a hometown launch of the book in Tunkhannock.

As COVID restrictions are relaxed, personal appearances will be announced in this publication. Additional updates can be found on Instagram at #AmericanBourbontheBook.