LeRaysville’s Early History was as Rolling as its Hills 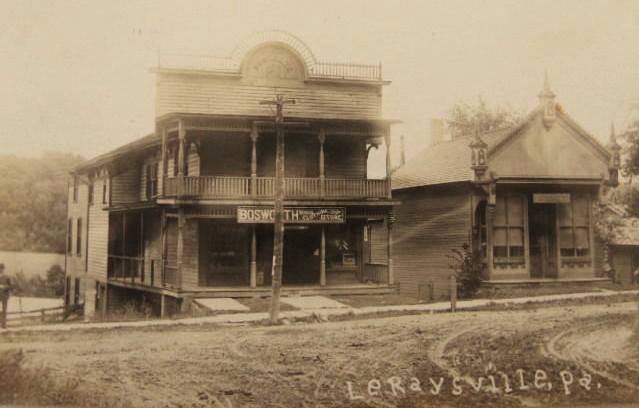 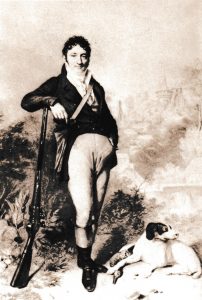 The Bosworth Store in LeRaysville (top) prior to the street getting its first pavement. Above, the borough’s namesake, Frenchman James LeRay Chaumont.

LeRaysville, all one-square mile of it, was named after a Frenchman who apparently never actually lived there. But its beginnings were nonetheless historic in an era when the Commonwealth of Connecticut still laid claim to northern portions of Pennsylvania. Indeed, many of Pike Township’s prominent early settlers came to the area by way of Connecticut and stayed on after the land grants were settled.

James LeRay de Chaumont was sent to the newly formed United States of America by his father, Jacques LeRay, to collect payment for his father’s material support of the colonists during the Revolutionary War. The process of petitioning for the reimbursement of the debt was so slow that young James fell in love with a girl in New Jersey, married her and became a U.S. citizen.

He settled in Jefferson County, NY, where the Town of LeRay is also named after him. Wealthy as he was, LeRay engaged in land speculation, buying large tracks in New York but also purchasing 80,000 acres of land in what would become eastern Bradford County. In fact, most of the lands north of Wyalusing Creek and east of Wysox were originally held by James.

His business enterprises in New York state initially flourished but then failed during a market crash, forcing him to sell his land in Pennsylvania to the DeCaters, a family of Belgian bankers, and the DuPonts. He returned to France in 1810, but his son, Vincent LeRay remained in America. James returned to LeRay, NY, in 1816 for a 16-year stay before retiring to France, where he died in 1840.

Pike County was incorporated in 1813, formed from portions of Orwell Township in Bradford County and Rush Township in Susquehanna County within a year of the incorporation of Bradford County. Pike Township itself was split in 1837 to form Herrick Township and again in 1926 for the formation of Stevens Township. LeRaysville served as a center of trade for many years, and its population has fluctuated only slightly from 284 in 1870 to a peak of 374 in 1890 and down to an estimated 276 in 2016. It was incorporated as a borough in 1863.

Always very rural, the residents of LeRaysville and the nearby village of Neath have long been considered one community. Old photos abound of many stately homes and businesses in Pike Township, but even townsfolk have a difficult time remembering exactly where they were as many of them are gone and the best known historians have passed away.

Looking over the volumes of history book entries and newspaper clippings filed at the Bradford County Historical Society, it seems that not only has the appearance of LeRaysville changed many times over the years but also the livelihoods of its citizens. The community has been home to several mills and tanneries, large churches, a cigar factory, general stores, the LeRaysville Academy and other schools, furniture manufacturers and, in recent years, a dairy-turned-cheese factory.

One of the largest houses of worship in the LeRaysville area was the Congregational Church, which celebrated its 100th anniversary in 1903 with a two day “spiritual fest.” According to newspaper accounts of the time, the church started with a meeting of 10 people and grew to 200 members by 1853. Methodists and Presbyterians joined in the celebration, which drew former parishioners, ministers, superintendents, and even a popular choir master. The church still exists as the Dille Parish United Church of Christ, which alternates meetings on a monthly basis with Potterville UCC.

When it comes to businesses and manufacturing, much has been written about the G.N. Johnson & Son Furniture Factory. Owner George N. Johnson was born in Orwell Township in 1838, one of 10 children of Joel and Sophronia Benham Johnson. Joel was the son of Asahel Johnson and reportedly the first white male born in Orwell Township in 1799. Joel was a farmer who manufactured bedsteads for a while before devoting his energies full-time to agriculture.

George attended school until he was 17 and started to learn the furniture trade prior to enlisting in the Union army at the beginning of the Civil War. After he mustered out in 1863, he returned to making chairs on his father’s farm before building his first shop in LeRaysville in 1870. He moved to the town in 1874 and constructed a mill for the primary purpose of constructing bedroom furniture, much of which was sold to mining families in the Lackawanna and Wyoming valleys. His company perfected the process of making veneer, the thin wooden covering of decorative furniture.

The company was also the only known maker of croquinole boards, a parlor game that became quite popular among the elite during the late Victorian era. The factory that famously “employed a large force of hands” burned down in 1902 and was rebuilt by George’s son, Scott Johnson, who also helped LeRaysville establish its water works.

Scott sold the company to his brother, Arthur, and moved to Nichols, NY, where he started a mill that made shoe racks for the Endicott Johnson Shoe Company and turned out gingerbread trim that was used on many new buildings in the Twin Tier region.

While the Johnson Furniture Factory may have lasted longer in the memories of some residents, one business both preceded and outlasted it. E.M. Bailey started the Bailey Foundry in 1845. Originally situated on Main Street and later moved to East Street where it could expand, the company built the Bailey Plow, which was exported across the state and beyond. The business far outlasted E.M. Bailey, producing plow parts under his name that were shipped from the town as late as the 1940s.

Farming was always a large factor in commerce in the Laceyville area, and its hilly terrain led to the design by architect and builder Morgan Thomas of Welsh barns. As many as a dozen of these unique structures, like the William Davis barn (below), dotted the landscape around Neath at one time with seven of them still in existence in the summer of 1984 when writer Martin Hudacs featured them in an article for Farmers Friend. 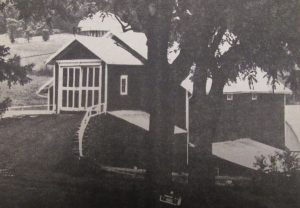 Three floors high from the lower entrance where livestock moved in and out, Welsh barns featured a ramp and bridge to the third stories where loose hay and straw was stored. The farmers used gravity to deliver the hay through chutes to mows on the first floor, where the fodder could be easily distributed to the animals, thus eliminating the need for stacking bales.

During those early years, every vibrant community supported its own school district with a variety of one-room schoolhouses and, as the towns grew, a secondary school at which students could complete their educations, unless they were needed on the farm or called to war. Consolidation was always a controversial concept but also a necessity as populations shifted and budgets tightened.

LeRaysville High School (above) graduated its final class in 1955, after which students from seventh through 12th grade joined those from other nearby townships at Northeast Bradford Consolidated High School. The buildings left behind in LeRaysville, Rome, Windham and Warren Center that year served as elementary schools for the next 15 years when a consolidated Northeast Bradford Elementary School opened its doors.

Businesses and schools close, and houses sometimes fade back into the earth when their families leave them. But many of those buildings seen in old LeRaysville area postcards that are no longer standing were lost to natural elements. Many barns, including one on the Petritis farm (below), were destroyed in July 1940 when a “cyclonic storm” – most likely a tornado – moved through the area uprooting trees and pummeling crops and buildings with baseball-size hailstones. 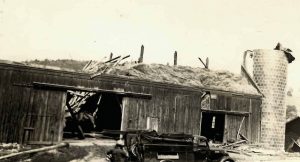 Newspaper reporter Jim Tower wrote, “There was scarcely a whole pane of glass left on the north side of any building in LeRaysville, even the heavy windows of First National Bank building being crushed like paper.” Many of the stained glass windows in the Congregational Church were also broken. Another tornado did extensive damage to LeRaysville in 1988.

Six buildings in the downtown area were lost to an early morning fire in July 1943.

As with any American town large or small, there is always more to tell but often not enough time to tell it. The borough of LeRaysville perseveres as a hallmark of small-town Pennsylvania, still very rural in character and holding on to its cherished memories. Many of these can be found as they are shared via social media, including the “You Might Be from the LeRaysville Area if…” and “LeRaysville Historical Photo Society” Facebook pages. 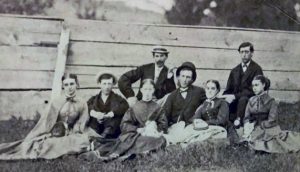 The Green Family of LeRaysville as they appeared on a photo studio card from 1886. 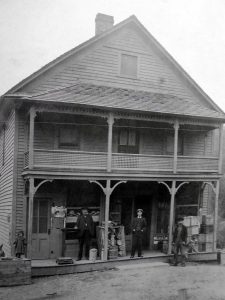 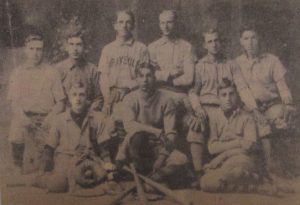 The LeRaysville Sluggers were undefeated in 1905. 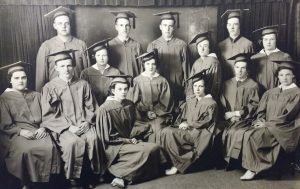 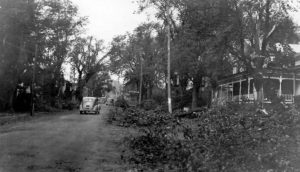 Main Street in LeRaysville was quite a mess in July 1940 after a tornado raced through town. 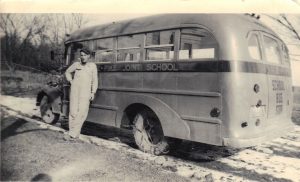 Elton Parker stands next to his school bus in 1943. 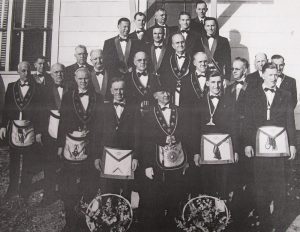 Masonic Hall members (above) gather for a photo during a dedication ceremony in 1947, a page from the program for which is shown below. 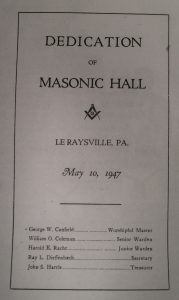 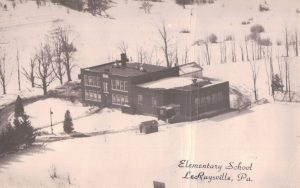 The former LeRaysville High School served as an elementary center for 15 years after graduating its last class in 1955. 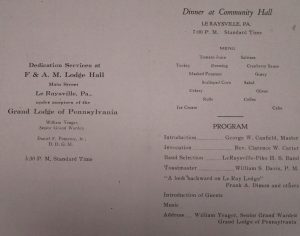 There was always something to do in LeRaysville, even if it was just dinner at the Community Hall. 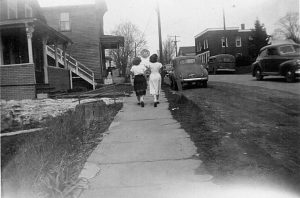 A typical scene from the 1940s shows two young women referred to as Laura and Gert walking in downtown LeRaysville. 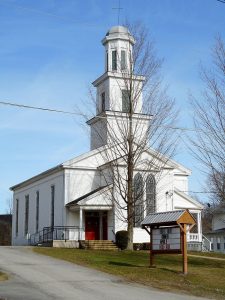 The UCC building in LeRaysville was the long-time home of the LeRaysville Congregational Church.