Led to a Career on the Susquehanna by Mr. Rivers 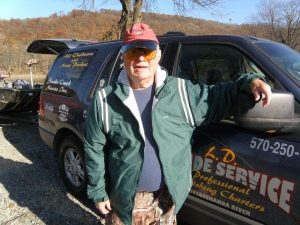 Lance Dunham (top), owner of L. D. Guide Service, is ready to get you out on the Susquehanna River. Philadelphia lawyer Dick Rivers (above) was the instigator and a longtime supporter of Lance Dunham’s development of his business. Rivers passed away in 2013 after one more boat ride on the river in Bradford County.

It had never occurred to Lance Dunham of New Albany prior to 1980 that he was cut out to be a professional fishing guide. His father, Daniel, took him trout fishing when he was a kid, but it never quite snagged him. At about 7, however, he got hooked on bass fishing in the Susquehanna River after his Uncle Lyle got him past his fear of capsizing their 10-foot aluminum fishing boat. Then, at 15, he took a liking to Eileen Saxe, who also loved to fish. Obviously, she was a keeper, and the two have been married since 1973.

Throughout high school, Lance looked forward to weekends, when he and a bunch of local boys would get out on the river – probably some of the same boys with whom he’d met up at local ponds when they were younger to try to pull up some sunnies or catfash with a cane pole. But that day he got wedged into his uncle’s boat with Daniel and Lance’s cousin, Randy, river fishing became his new passion.

“It was kind of tipping, and I was scared to death that it would flip over,” Lance recalled of that first ride. His uncle must have sensed Lance’s fear because, when he steered the boat back to shore, he encouraged Daniel to take Randy home, and Lyle took Lance back out on the river. He tempted Lance to go ahead and rock the boat.

“He said, ‘Go ahead. Try to tip it,’” which Lance found was not possible. “Before you knew it, he had me driving the boat. That’s how my interest in the river got started.” His first rod, he remembers proudly, was a Baitcaster with a level line, which Lance noted was “new fangled thing at that time.” He continually upgraded his equipment and boats as his new hobby evolved.

Around 1980, Lance was operating a small sporting goods store in Dushore, one of three jobs he’d taken on to make ends meet. Even there, he was lucky to pull twenty five dollars out of the drawer at the end of a shift. One day, a man wearing a three-piece suit walked into the otherwise empty store. The visitor asked Lance if there were any fishing guides who could take him out on the Susquehanna River, which is was about 14 miles away.

“I told him I’d never heard of any fishing guides around here and, besides, it’s real easy to catch fish out on the Susky, so why would you need a guide?” said Lance, who did manage to mention that he had a boat and plenty of experience on the river.

The customer puttered around the shop some more, returning to the register with some lures and other small items, and asked Lance if he might take him out on the river. “He was in the store for about 40 minutes, and I turned him down four times,” Lance remembered, telling the city-slicker, “I’m no guide, and I don’t need any more pressure with another low-paying job.”

Finally, the fellow introduced himself as Dick Rivers and asked Lance how much he made in the store in a day. Lance admits that he lied through his teeth in telling Dick that he averaged fifty dollars. Dick called his bluff and put fifty dollars on the counter, asking simply that Lance would take him for a boat ride and let him bring his fishing rods just for fun.

It didn’t take long for Lance to rethink the situation, lock the door and put up the Closed sign and agree to meet back there in two hours with his fishing boat and gear. Dick arrived with two high-end fishing rods that caught Lance’s eye and his respect. Surely Dick must know something about fishing to have brought the perfect rods for reeling in small-mouth bass and walleye.

“No, not really,” Dick told him. A friend who owns a sporting goods store down the line had set him up, he explained. “This is my first time.”

Lance couldn’t help but have a little redneck fun with the Philadelphia corporate lawyer. He forgot to tell Dick to wear boots, for example, and the shoreline was particularly muddy that day. When they got about two miles upriver from Terrytown and Lance cut the engine, Dick started asking a lot of questions to which Lance had assumed everybody already knew the answers.

Lance loaned Dick a Mister Twister grub lure and, after attaching it his line, Dick asked, “Now what do I do with it?” Lance retorted, “Cast it in the water, that’s where the fish are!” They fished for about four hours, the flat-bottomed, 14-foot Jon boat getting caught up on the river bottom numerous times. Nonetheless, they caught about 30 fish between them.

When they got back in the truck, Dick exclaimed, “You just guided me on the best fishing day I’ve had in years,” and he put a twenty dollar bill on the dash. Lance was thinking, “I kind of like this.” Dick asked if he could return the following Friday, which he did for the next several months. He came back the next year and encouraged Lance to buy a bigger boat so he could bring a friend along or send friends to Lance.

“I sure do owe Dick a big debt of gratitude for getting me started on what I think is the best career in the world, as long as Mother Nature lets me on the river,” Lance wrote in the latest chapter of a new memoir on which he’s working. He didn’t advertise for the first few years, relying solely on references from Dick and others. Eileen initially kept the shop running while Lance was out.

Dick became more of a trusted friend than customer over the years. Even though the two didn’t always agree on technique – Lance says that Dick played the fish too long – they explored new fishing holes together, discussed lures and boats, and the growth of Lance’s business as he invested in brochures and started using the internet for promotion.

During the last five years that Dick could make the trip to Bradford County, Lance noticed his old fishing buddy growing weaker. He was also down to four trips per year. “If he ever missed a trip, he always insisted on paying me,” Lance related. “He had a lot of integrity – a lot of class.”

Dick’s son brought him up from Philadelphia one last time in 2013. Dick didn’t fish, though Lance and his son did. Dick just wanted to ride on the river one more time and look around. Before he left, he gave Lance a .35 Remington hunting rifle that Lance had forgotten expressing an interest in many years before.

“We exchanged manly hugs and said, ‘Goodbye,’” Lance recalls. “He died of a heart attack two weeks later.” Dick’s family was well aware of his fondness for fishing the Susquehanna and his long friendship with Lance, whom they invited to the services and to a campfire that night where Lance shared their story.

In 2020, Lance reached a landmark 40 years as a professional river guide. His first book, given the title “Legend or Survivor – 40 Years on the River” by his publisher, should be out this summer. In the meantime, Lance spent the winter months gearing up for a big new season and filling calendar dates with new and returning customers. In addition to an 80 percent return rate among his patrons, Lance has the support of corporate sponsors like Rage Tail Plastics and Adams Custom Lures, for whom he has designed lures, and BigDady Rods.

Lance is a proponent of catch-and-release excursions. There is no live well on his boat. Though available dates for spring and summer months are already filling quickly, Lance is always interested in getting more people out on the river, especially families and youths.

“There’s always a sense of adventure on the river,” Lance maintains. “You never know what you’re going to catch. There’s always a bass, musky, pike or something big that surprises you.”

For more information about L.D. Guide Service Professional Fishing Charters, including merchandise, photos and videos, and booking information, interested readers should log on to www.ldguideservice.com and follow the adventures of Lance and his patrons on the L D Guide Service Facebook page. 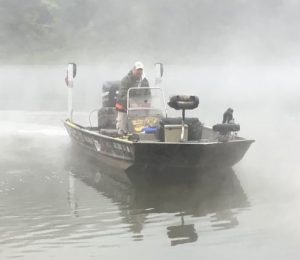 As long as the Susquehanna River is not running too high or fast, Lance will take anglers to the fish in almost any kind of weather. 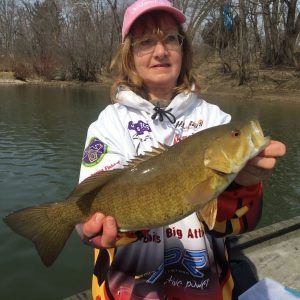 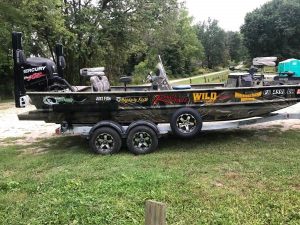 Lance’s 21-foot SeaArk jet boat can comfortably cruise up the river at speeds of 35 mph or more. He limits occupants to three besides himself for safety reasons. “Too many hooks flying around.” 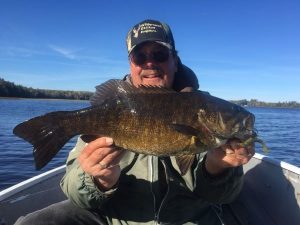 Lance says you never know when that big one is going to come along. 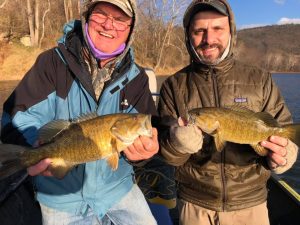 Rick Stevens and son-in-law Jeff DeLong show off a pair of bass they reeled in near Standing Stone on a November fishing trip. The excursion was a gift to the two from Jeff’s wife. 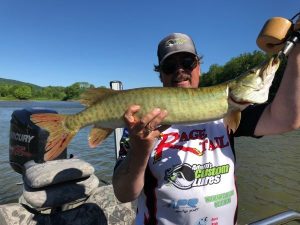 Lance Dunham holds up a nice musky he caught last September near Quick’s Bend before its release. 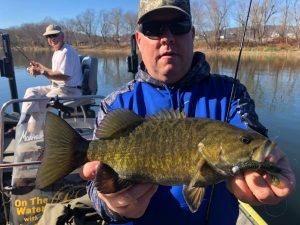 Larry Snoke (foreground) and his father, Larry, had a successful fishing trip in the Homets Ferry area with Lance in November 2020.