Wyoming County veterans affairs director Jack Huber stopped by the commissioners meeting on Tuesday morning with David Broadwell, a representative from Congressman Fred Keller’s office, to announce their collaboration on a project to honor veterans of the Korean Conflict. The South Korean government has launched a goodwill initiative to thank those who fought for their freedom from 1950 to 1953, as well as any United Nation peacekeepers who remained there for the two years following the war.

Huber and Broadwell (below, right) are seeking local veterans who are eligible for the Korean Ambassador for Peace Medal. Requirements include having had “boots on the ground” in Korea or serving on naval or other U.S. military vessels in territorial waters during that time period. 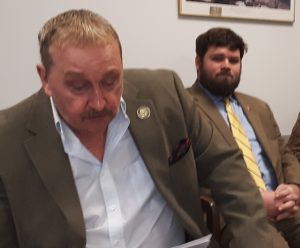 “As long as we can verify it, we can submit it,” said Huber (above, left), who encouraged veterans or next-of-kin family members to reach out to Broadwell at 570-996-6550 to initiate the process.

Knowing that documentation of military service can be difficult to locate after so many years, Broadwell suggested that interested parties bring to him what they can after setting up a meeting. “Jack and I can work with them to get their replacement military records,” Broadwell stated.

Commissioner Rick Wilbur noted that all three commissioners met on Feb. 24 with the county’s representative from Enterprise Leasing to evaluate the status of the 18 vehicles currently in service in the county.

Older vehicles have been sold and proceeds put towards new leasing agreements. Traditionally, vehicles are leased for five years, but a three-year old vehicle with low mileage may be worth more as a trade-in, the consultant told the commissioners. In those cases, it makes more sense and provides a savings to the county to trade it for a newer vehicle.

Enterprise has also provided the county with gas cards that provide a five cent per gallon discount. Fill-ups by county employees must be logged along with the vehicle mileage, which prevents personal use. The cards do not cost the county anything.

Safety Issues and ‘Shooter Drill’ Back on the Table

Sheriff Bob Roberts asked the commissioners to approve a $10,000 grant that will allow for an assessment of safety systems in all of the county’s buildings, after which the active shooter drill proposed by former county commissioner Mike Stabinsky can be scheduled.

According to Roberts, the process of evaluating the safety of each building will take several months. “We will do most of the leg work, then go to the consultant with what we think should be done,” he explained.

A meeting was planned later on Tuesday with a security task force that will implement the assessment, the cost of which is covered by the county’s liability insurance carrier. Under the new program, the task force will also begin to conduct fire drills at the courthouse, which an attendee at the previous commissioners’ meeting noted has not happened in nearly a decade.

The commissioners are planning a second meeting with Rep. Karen Boback to discuss how to reopen Roadside Rest Park between Route 29 south and Bowmans Creek in Eaton Township. The park was closed by PennDOT last year after numerous reports of discarded refuse, drug use, and trespassing.

“The county does own it,” commissioner Tom Henry remarked. For many years, the commissioners have insisted that the land belonged to PennDOT, but Henry noted that he found the deed to the property. “It was given to us to put a park in.”

A “handshake deal” with PennDOT more than 50 years ago has apparently run its course, and PennDOT officials have expressed a desire to rid themselves of the burden. On the other hand, the PA Fish and Boat Commission wants to continue to stock the stream there for trout season but doesn’t necessarily want the responsibility of the entire park either.

“We’re quite concerned that we keep the fishing portion of it,” commissioner Ernie King commented. “That’s a very popular spot.”

Trout season on northern Pennsylvania opens on April 18, and the commissioners would like to have the situation resolved by then.

Commissioner King attended a meeting of fire company officers from throughout the county at which participants disbanded a former organization – the Wyoming County Emergency Services Group – with guidance from the county solicitor. They subsequently established a new Wyoming County Fire Chiefs Association and absorbed what was left in the former’s bank account.

“There was a lot of interest,” King related, noting that a second meeting has been scheduled for next month. An initial emphasis of the new group, King explained, is to coordinate the resources of the separate fire companies with the county EMA. That way, policy and software updates can also be coordinated on a county level.

the commissioners have been making the rounds with various organizations, learning about beneficial programs, reasserting Wyoming County’s role in regional initiatives, and tidying up loose ends of projects left unfinished.

On the latter, the county continues to work with the PA Department of Community and Economical Development (DCED) to bring the Bridgeview Commons project in Nicholson to completion. The construction of low- to medium-income housing there languished under the control of the Wyoming County Housing & Redevelopment Authority for years. At their last meeting. Commissioner Henry reported that Dennis Phelps of Trehab had been helping them get the project back on track.

“I think they’re encouraged by what’s going on,” Henry said of DCED on Tuesday.

The commissioners conducted two meetings over two days with county department heads, deeming the sessions both positive and informative. “They know what they’re doing on an individual level more than we do,” commissioner Rick Wilbur stated, adding that the commissioners will now follow up with each department separately.

Commissioner Henry was recently appointed the new chairman of the Northern Tier Regional Planning & Development Commission, which is working on a long-term transportation plan. The draft document will be available for review and open comments online from Feb. 24 to March 24. County planner Lynnelle Farber has a copy of the plan, which Wilbur asked her to forward to municipal leaders. The transportation plan addresses state, county, and township roads and bridges in a five-county region.

Farber reported to the commissioners that she currently has nine applications for Marcellus Legacy Fund grants, which are geared toward recreation. If each applicant meets eligibility requirements, a record $45,000 of the $50,000 that the commissioners made available through the County Planning Department will be disbursed for rehabilitation of sports fields, a new river access point in Exeter Township and other projects.

Bill Bender, a consultant for Merrill Lynch, has offered a free pension plan review for the county. While the company “is no longer in the pension plan business,” Wilbur related, Bender has worked with the county previously and will help the commissioners evaluate the investment firms that currently handle the pension plans.

The Salary Board will convene on Friday to confirm the hiring of a new individual to administer the $600,000 grant received in 2019 by the district attorney and human resources departments for drug and mental programs, as well as to discuss the potential hiring of a full-time assistant for the Elections Office.

Wyoming County Human Services currently has a position open for a county social service aide, level I. According to the agenda, the position is approved as state-compliant and is already part of the Children & Youth needs-based budget. The full-time post is a state Civil Service position, so the $16,871 salary will be reimbursed to the county by the state.