Indigenous Names of the Susquehanna Greenway 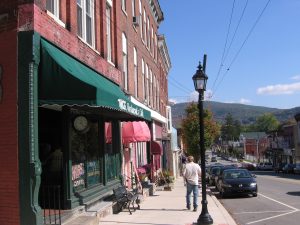 A couple enjoys the view of the Susquehanna River from the walkway (top) that parallels the Merrill Parkway in Towanda, which is derived from the Nanticoke language and means “burial place.” Interpretations of the name of Tunkhannock (above) vary from “small stream” to “bend in the river.”

In this article, you’ll learn about just a few of these parks, trails, and landmarks with key ties to Indigenous history. Remember, many of the paths we walk today have been walked for thousands of years.

Black Moshannon State Park (West Branch): Situated along Moshannon Creek, Black Moshannon State Park was initially inhabited by Susquehannock people. The name Moshannon is derived from the Algonquian word “Mos’hanna’unk,” meaning “elk river place,” with “black” referring to the darkness of the water due to the plant tannins from the bog. Located within one of the most remote sections of the Susquehanna Greenway and the PA Wilds, it is also one of the few places you might see wild elk today.

Chickies Rock (Lower Susquehanna): Chickies Rock, a stunning 400-foot overlook situated where Chiques Creek runs into the Lower Susquehanna, is a derivation of the Algonquian word “Chiquesalunga” meaning “place of the crayfish.” Many Indigenous names are written multiple ways, like “Chickies” and “Chiques;” since these words were not originally written using the English alphabet, accepted spelling often varies. 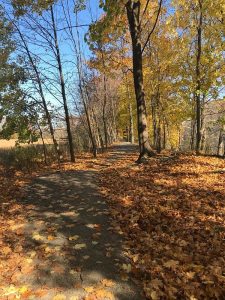 Diahoga Trail (North Branch): The Diahoga Trail (above), which saw its grand opening in 2019, runs 1.5 miles from Athens to Sayre. The word “Diahoga” comes from the Susquehannock name for what is now the town of Athens. The name, which means “at the forks,” is fitting for the community, which is situated at the confluence of the Chemung River and the North Branch of the Susquehanna River.

Iroquois Trail (North Branch): This 3-mile trail is located near the town of Tunkhannock, another town with rich Indigenous history. Although the name Iroquois is still widely used today, it is actually a derogatory term that the French used to refer to the Haudenosaunee people. The term is a mispronunciation of the Algonquian word for “snakes”—an insult used originally by the Algonquians, who engaged in continued conflict with the Haudenosaunee.

Shikellamy State Park (Confluence): One of the most recognized Indigenous names in the Susquehanna River Valley is that of Chief Shikellamy, the namesake for Shikellamy State Park, which is situated at the confluence of the North and West Branches of the Susquehanna River. Shikellamy was a leader of the Haudenosaunee Confederacy who lived in modern-day Sunbury in the mid-18th Century and served as an emissary from the Haudenosaunee in New York to the colonial government in Philadelphia.

Tiadaghton State Forest (West Branch): Tiadaghton is the name the Haudenosaunee gave to Pine Creek, a major tributary that runs into the West Branch of the Susquehanna. The Pine Creek Path, which passes through Tiadaghton State Forest, connected Native villages along the Susquehanna River with other Haudenosaunee communities in New York. A rail line was later constructed along its route, which has since evolved into the popular Pine Creek Rail Trail. 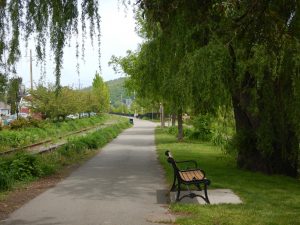 Towanda River Walk (North Branch): Towanda means “burial ground” in the Algonquian language and, indeed, the town of Towanda is located near a Nanticoke burial site. The Nanticoke’s traditional homelands lie around the Chesapeake Bay; however, in the 18th Century, some members of the Nanticoke people moved North into Pennsylvania, seeking the protection of the powerful Haudenosaunee.

Tunkhannock – SGP River Town (North Branch): The name of the SGP River Town of Tunkhannock has various interpretations; some maintain that it signifies “small stream,” while others have traced it to mean “a bend in the river,” referring to a sharp upstream bend in Tunkhannock Creek known as “the Neck.”

White Cliffs of Conoy (Lower Susquehanna): The White Cliffs of Conoy, located in south central PA, are named for the Piscataway Conoy Tribe, a group of Nanticoke people who traditionally lived along the Potomac River. They moved North with other Nanticoke people in the early 1700s, seeking land and protection. These cliffs are actually a limestone deposit which can be explored just off of the 14.2-mile Northwest Lancaster County River Trail.

Indigenous voices are essential to understanding our relationship with the land. When visiting one of these spots along the Susquehanna Greenway, take some time to consider its importance to the Haudenosaunee, Susquehannock, Nanticoke, and others who previously called it home. While the Susquehannock people are no longer active in the area, the Haudenosaunee Confederacy is an important force in the Northeast today. For more information, visit their website at haudenosauneeconfederacy.com.

Anna Jordan is the AmeriCorps Communications and Outreach Assistant for the Susquehanna Greenway Partnership. Her work centers on facilitating connections between local communities and the land, and ensuring that everyone has the opportunity to strengthen their relationship with the Susquehanna River. Anna can be reached at ajordan@susquehannagreenway.org.