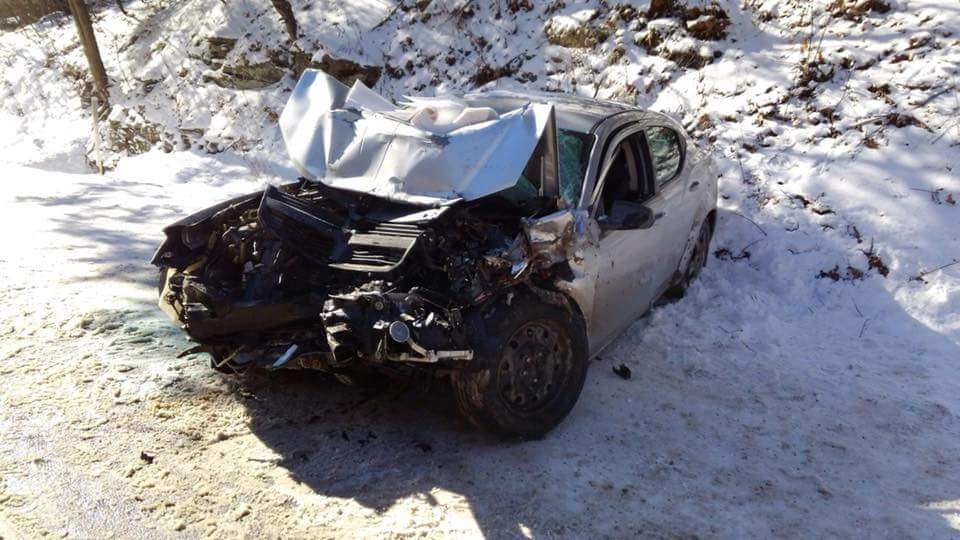 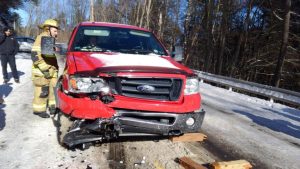 Both female passengers in the Dodge Avenger (top) were seriously hurt in the four-vehicle accident just north of Meshoppen on Jan. 14. Meshoppen Fire Department chief Chris Carney (above) attends to one of three passengers in the Ford F150 that was involved in the second part of the crash on Rt. 267 on Sunday

(As published in the Jan. 18 edition of the Rocket-Courier)

A two-vehicle accident quickly turned into a four-vehicle crash midday Sunday on Route 267 a mile north of Mowry Street. The crash is still under investigation, and accounts of the situation may vary.

Randy Trible of Meshoppen was traveling north on icy roads in a 2011 Dodge Ram 2500 with his fiance Rachel Turner and their baby boy when a 2009 Dodge Avenger, driven by an 18-year-old female, came around the corner toward them.

The Avenger and the Ram pickup met head-on. The teen driver and another young female passenger incurred moderate to serious injuries.

Trible was out of his vehicle, calling in the crash on his cell phone, when a 2008 Ford F150, driven by Joshua Miller of Coplay, came from the north around the same corner. Danny Brown of Meshoppen, had stopped in the right lane in a 2015 Jeep Cherokee. Those two vehicles also met head-on.

Trible had just ended the first call to 911 and quickly redialed to inform the dispatcher that there was now a four-vehicle MVA (motor vehicle accident). The first two vehicles involved and the people who were already out of their vehicles were narrowly missed during the second phase of the accident, Trible noted.

“They were all in close proximity to each other,” said Meshoppen Fire Department chief Chris Carney, in reference to the scene he encountered. Though there was no entrapment, the situation was reported as a Level 1 MCI (mass casualty incident.)

Primary first responders on the scene were Meshoppen EMS and Meshoppen Fire Department. Additional companies to respond included Commonwealth, Montrose and Towanda ALS, Medic 33 and two medical helicopters that hovered but reportedly did not land.

Trible related that his truck and the car involved in the first accident incurred heavy front-end damage. According to the police report, the next two vehicles sustained disabling damage and were towed from the scene.

Trible and his family were treated at and released from Tyler Memorial Hospital. The girls in the Avenger, whose injuries were more serious, were transported to Geisinger Wyoming Valley, as was Robin Brown.

“God was certainly watching over us. That’s for sure,” Turner shared on Facebook after the incident. “We’re very lucky that we’re just sore. Others involved in the car accident have broken limbs.”

Trible is grateful that the injuries sustained by his family were not serious, but he is angry that road conditions remained so poor more than 24 hours after the recent storm had passed.

“We’re beat up, but we’re OK,” he remarked. “But PennDOT needs to be held accountable for these roads. The conditions were horrible.”

Carny described the road surface conditions as “solid ice with slush on top,” adding, “Walking around the scene was difficult.”