I Am Not Raising a School Skipper 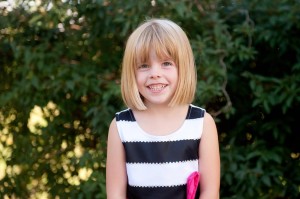 “Momma, when can I be absent from school?”

This question, posed by my very serious five-year-old at bedtime the other night, made me stop for a moment during tuck-in time.

“Ummmm, what do you know about being absent?” was my follow up question.

“Well, it is when you don’t need to come to school,” was her quick response. She looked up at me with her big blue eyes anxiously awaiting my answer as to when she could be absent. Mind you, we were only into the sixth week of kindergarten.

I can only assume that she has learned about this word and what it means in school, because it is one I cannot recall using with either of my daughters. Which in itself is surprising because the vocabulary that is used in our home is vast.

At this point in the evening I thought I could end this discussion by letting her know that in three days she could be absent. To which my ever helpful eight-year-old piped in, “But that’s Saturday, and technically you cannot be absent when it isn’t a school day.”

I wanted to sarcastically thank her for pointing this out and spoiling my mom moves, but I just went with the “look,” to which she returned a look of understanding and mouthed “sorry.”

My youngest is a bit more clingy than my older daughter. There have been a few days since she started school where she has asked if she could stay home because she will miss me. I have explained that she will be okay and that she should go to school to learn great things, and that ends the conversation.

Though she is quite smart at times and will explain that it is I who will miss her, so she must stay home that day to be with me. I am going to have my work cut out for me with this one.

I think back to when I went to school, and I never feigned illness to stay home. I actually liked going to school and will admit that it was mostly due to the social aspect more so than the learning. I recall getting sick at least once a year, and I would miss a few days or a week; I never really missed days here-and-there.

My youngest sister went through most of her school years never missing a day, but that wasn’t the case with my oldest sister. She would try everything to get out of going to school; some days she was successful and other days not so much. It probably didn’t help that our mother was a nurse and would whip out the thermometer and conduct an exam if we mentioned feeling unwell – or the fact that our grandmother worked for the school administration office and would see the absentee list to know we weren’t in school and promptly call our mother. To me it wasn’t worth the hassle, and again it was a social thing.

I think I am like many other parents who hope that the struggles with getting our children out the door in the morning for school without a fight wouldn’t begin until high school – maybe some signs of this showing up in middle school. The more I read and hear and see from other parents, the more I am beginning to think this is happening early on in their school career.

I see many posts on Facebook from parents who decide to keep their kids home for various reasons. Some are completely legit, and others leave me shaking my head and thinking, “What the hell?” I try to imagine what those parents were thinking to just allow their kids to stay home.

I know that children argue about it and, as a parent, you just don’t want to hear it anymore and can let them stay home to avoid the headache. But, really, who will this affect in the end?

Your kid – oh, and my kid who is friends with or knows your kid and comes home from school one day saying that so-and-so got to stay home “just because.” So, now I have to battle with my kid and be “that mom.”

That makes me want to ask these parents if they know what they are teaching their child – basically that it is okay to not to be responsible. What a great foundation they are helping them build for their future. As adults, they will have a tendency to call in sick to work randomly, which could result in them losing their job one day. Or they will end up just quitting one day, because they just don’t feel like working at that job anymore.

They are not going to think about the repercussions to these decisions and what could possibly happen to them as a result, and maybe that is because they have never really understood accountability. This could all be traced back to being allowed to skip school “just because.”

I am not that parent and my daughters are finding that out. Thankfully my oldest daughter enjoys school so much that she has told me she would attend every day, year-round. She gets so upset when she is sick and cannot go or if she has to leave early or arrive late because of an appointment. She takes school seriously, but then again she is also the child who has had a college picked out since first grade, as well as her future career. She is driven and I would like to think that my husband and I have helped develop that, but I also know that it is just the way she is wired.

Now, my youngest is a sensitive one and such a free spirit that I know being confined to a classroom five days a week is a struggle for her. But I never thought I would be handling a question of this nature so early on. My first reaction is to squash any and all thoughts of skipping school from her little mind. I feel that this little one is quite strong though and I do not want to create a lasting battle for the remainder of her days in school. I knew the best option would be for me to talk to her in a manner that will make her want to return each day.

That night, I took a few extra minutes and sat on her bed explaining all the great and fun things she would miss out on if she were absent. I explained that it could be difficult to catch up on the learning she had missed as well as the fun times at recess with her friends. I told her that even though I do miss her and her sister while they are at school, I am keeping busy with my work. I cannot decide to not do my work, because others are counting on me – just like her teacher is counting on her to be at school every day.

For the moment that seems to have worked, but I know her all too well and it won’t be long before she asks me that very question again or a slightly different version of it. My answer will always be the same, and my children will attend school unless there is a good reason why they can’t.

I can foresee the coming years with this one; her will is strong, much like mine. I know we shall battle over many things and I also know that her skill of persuasion will grow stronger as well.

Unbeknown to her, I grew up with a sister quite similar, and I know the tactics she will try to use. So I will be prepared (insert maniacal laugh here). This mom is not raising a child who will skip out on responsibility, just because. And to every parent who decides to just let their kid stay home – I ask you to rethink that and do them a favor and send them. They don’t have an option – they need an education.

(Editor’s note – not only have I worked professionally with k.m. cole in the past, I have become a huge fan of her postings on Facebook relating to her two daughters. Both consistently prove that kids still do say the darndest things, and k.m.’s thoughtful approach to helping her girls handle the challenges and embrace the simple pleasures of childhood always impress me. We look for forward to future submissions as k.m. shares her refreshing brand of Mommy Logic.)

2014-10-17
Previous Post: The Mix is the Fix for Chilly Autumn Blues
Next Post: If Nobody’s Using This Dock…