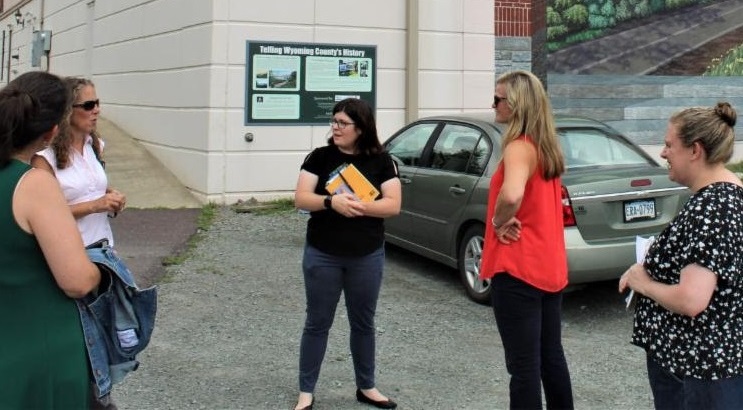 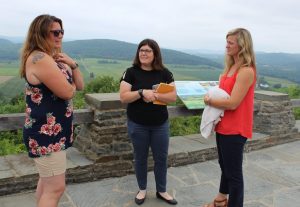 Jill Macauley (Top, second from right) and Catherine Grace (third from right) of Relevant Strategies & Solutions speak with EMHR board members at the Wyoming County Cultural Center and Marie Antoinette Overlook in Bradford County (above with Wyoming County Planner Lynnelle Farber) earlier this year in the process of updating the EMHR’s Management Action Plan. Below, EMHR executive director Cain Chamberlin addresses participants of a workshop and retreat held at the Bradford County Public Safety Building on Dec. 1. 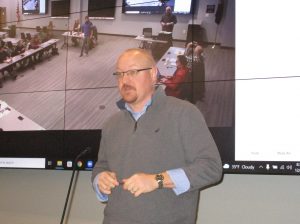 Board members of the Endless Mountains Heritage Region (EMHR) attended a retreat on Dec. 1 at the Bradford County Public Safety Building to learn of the progress of the new Management Action Plan (MAP) started earlier this year. MAP is an appropriate acronym for the project, as it will frame the course of action taken by the organization over the next decade.

EMHR executive director Cain Chamberlin conducted a brief business meeting before turning over the floor to Jill Macauley and Catherine Grace of Relevant Strategies & Solutions. Associate director and project manager, respectively, for the consulting firm, the two who have been working closely with EMHR staff and its MAP Committee to assess current strengths and areas of potential improvement. They will also help determine how the EMHR can continue to grow and fulfill its mission of celebrating, preserving and enhancing the rural character and culture of the four-county Endless Mountains Heritage Region.

The retreat was an important step forward for the MAP, after months of polling board and associate members and analyzing objectives and potential outcomes. “It’s going to start feeling a little more concrete and less abstract from this point forward,” Macauley remarked as they began their presentation.

Topics ranged from internet and social media oversight, diversifying funding streams, and orientation for new members to an overview of how a heritage area can transition from state to national recognition and the continued goal of the EMHR to codify the region’s trails into a network that would draw visitors to the area.

Vehmeyer addressed a desire by the MAP Committee to assess the viability of seeking national heritage status for the EMHR. The initial process requires involvement from the public, as well as local and state government officials. As the final decision would be made by Congress, she noted, it doesn’t hurt to have a Congressional sponsor to endorse an organization’s application. Oversight for National Heritage Areas is provided by the National Park Service, but the ongoing management remains at the local level.

Cain Chamberlin maintained that national recognition would be a long-term goal, as the short-term goals identified by the committee require more immediate attention and resources. Despite the fact that the funding after such a designation can increase dramatically, Vehmeyer suggested that the feasibility study alone can take up to three years. Her presentation also pressed board members to determine if there is a single American story of historic significance that would collectively define Bradford, Sullivan, Susquehanna, and Wyoming counties.

Silas Chamberlin addressed questions about how various heritage organizations promote the trails in their regions and whether creating a trail of their own or adopting an existing one is in the best interest of the EMHR. The best news, he related, is that the timing is perfect for heritage organizations to be making such decisions.

“This is a special moment for heritage areas,” Silas stated. “Heritage areas can position themselves as resilient elements of the post pandemic economy that provide healthy outdoor recreation, enhanced quality of life, and economic benefits.”

While state parks and forests in Pennsylvania saw an increase in visitation of 27 percent during the pandemic, usage of trails across the Commonwealth jumped by more than 200 percent, resulting in a $29 billion boost to the economy.

Cain Chamberlin cited work in recent years to establish Forest City in Susquehanna County as an official Trail Town while it continues to navigate the Outdoor Town program. At the same time, the D&H Rail Trail that abuts the borough bares the distinction of the 2021 Pennsylvania Trail of the Year after it was nominated by the EMHR. He sees Forest City’s success as a viable pilot program to show the rest of the region the benefits of trails and outdoor recreation.

Board members will meet virtually within the next week to offer their reflections and thoughts on the MAP retreat, revisit the EMHR’s mission and vision, and reassess the role of the board and its sub-committees.

“Our intent is to work together with our board of directors, our MAP committee, regional stakeholders and residents to establish a vision and obtainable set of goals that will ensure preservation of our four counties’ history and culture, the expansion of outdoor recreation opportunities in our area, and the sustainability of this organization far into the future,” Chamberlin said. “I feel that, with this well-rounded and passionate group of partners we have working on the project, this will be a Management Cation Plan the Heritage Region and anyone who resides within it can be proud of. It will be the foundational document that guides us for many years to come, so we appreciate all of the input and involvement we can get.”