Paddling sojourns, such as the one above to the Standing Stone on the Susquehanna River in Bradford County are among the growing number of recreational activities conducted by the Endless Mountains Heritage Region to showcase the diversity of nature and history in the area. Below, EMHR executive director Cain Chamberlin (right) and administrative assistant Vanessa Billings-Seiler stand across from the organization’s headquarters in Towanda. The building at 602 Main Street was one of many in Bradford County to benefit from the recent Route 6 Façade and Signage Program. 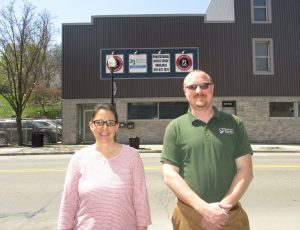 The Endless Mountains Heritage Region received its official charter in 1998 after at least a half decade of planning and lobbying by elected officials and community advocates. The PA Heritage Program was gaining momentum, and they recognized the possibility of further establishing the region as a unique part of the state with a common thread and shared interests that deserved recognition.

“Conceptually, it was something that we started working on in 1993,” said Kevin Abrams, executive director of the Northern Tier Regional Planning & Development Commission (NTRPDC) and current Endless Mountains Heritage Region (EMHR) board president. Abrams noted that the EMHR was initiated under the umbrella of the NTRPDC. “While it was a program with us, I had numerous people tag team being the EMHR director. We called them program managers because it was just like a program that we had in house.”

“There was an apparent opportunity within the state to add some new heritage regions, and there was some funding available,” Rep. Tina Pickett recalled. She was a Bradford County commissioner at the time and one of the founding members of the EMHR. “Anything that promotes and brings more people and opportunities to the area, I would be in favor of.”

“There were already heritage regions across the state, and we were hoping to share some of the benefits of it and establish ourselves as a heritage region,” retired Wyoming County commissioner Judy Mead added. She was not yet a commissioner but a respected proponent of and developer of community programs and resources who was asked to join the board.

It wasn’t an easy sell, however. There were legitimate hurdles, as well as some misgivings about creating another agency that seemed redundant to some. “We already had a visitors bureau and the chambers,” said Mead. “There was concern about asking people to pay for membership in something else.” The Endless Mountains Visitors Bureau (EMVB) was established in the early 1960s.

Another obstacle was its size. Tioga County was considered by some at the time to be part of the Endless Mountains, but its leaders opted to go with the Lumber Heritage Region, taking a little bit of pressure off Bradford, Sullivan, Susquehanna and Wyoming county advocates who could now firmly establish themselves as the Endless Mountains.

And the EMVB was on board from the start, with Vivian McCarty of Sullivan County at its helm. It remains a vital partner of the EMHR, as does the newer Bradford County Tourism Promotion Agency. In addition to Pickett, the county commissioners were represented on the first board by Betty Reibson of Sullivan County, Lee Smith of Susquehanna County, and Bill Reed of Wyoming County. Mead, Abrams, and Bob Veleker – another well-known supporter of history and heritage related projects – rounded out the panel.

Taking their cues from established heritage areas, the EMHR laid the groundwork and prepared their case for the PA Department of Conservation and Natural Resources (DCNR), which has historically secured the bulk of heritage area funding.

“We had to put our heads together and come up with a common theme between the four counties,” Abrams explained. At the time, the vast landscape was still dotted by hundreds of farms. Though other industries flourished, it was the rural lifestyles and the small towns that still served as focal points of the rural community that made the region stand out from the surrounding counties.

“The agriculture theme didn’t come to us overnight, but it was obviously successful,” Abrams remarked. And that nagging question about redundancy? “We came up with a simple statement: The Heritage Region will build it, and the Visitors Bureau will promote it.”

The board crafted a Management Action Plan, which they took to Harrisburg to get their charter. The first named EMHR director was Joe Fuller, who was followed by Bob Veleker, Phil Swank, Annette Schultz, and Cain Chamberlin. In addition to the ongoing challenge of assessing, assisting and supporting heritage projects in an evolving world, each also dealt with the uncertainty of consistent state funding.

Fast forward to 2018 when Cain Chamberlin assumed the post of EMHR executive director. In the course of 20 years, industries had come and gone, and the number of farms had decreased dramatically. “Visibility of the EMHR and membership were low,” Chamberlin said of his initial assessment. “We were not hosting or attending enough events. There was definitely a need to get out into the counties more.”

Chamberlin, a Terrytown native, parlayed his communications degree, years of experience in the newspaper business, lifelong enjoyment of outdoor recreation, and knowledge of local history into a campaign to reengage the board and the region. He was also able to continue and grow a lot of the relationships that he’d developed as a writer for the Rocket-Courier. “I think it made the transition easier,” he stated. “It was kind of like being a reporter, using a lot of the same resources as the paper, asking people where they wanted us to go.”

Under previous directors, the Susquehanna River and the Loyalsock Creek had become focal points for recreation. In 2009, the Susquehanna River was designated a National Recreation Trail of the National Park Service, and the EMHR was named the official manager of the Susquehanna River North Branch Water Trail. A series of paddling sojourns and overnight trips for adults, youths, and families were offered. River clean-ups and single-day paddles were conducted by local outfitters, many of whom became the first official water trail stewards in the region.

With the North Branch being named PA River of the Year in 2016 and the Loyalsock in 2018, the EMHR hosted Rivers of Our Region presentations at local theaters and the DCNR office in Sullivan County. “That was a cool way to highlight our work with the water trails people,” Chamberlin remarked. “All of the presenters were avid paddlers or had a strong knowledge of the waterways.” The EMHR also has a strong relationship with the Susquehanna Greenway Partnership (SGP), which manages the Lower North Branch and West Branch of the Susquehanna River.

Meanwhile, other board members were taking a closer look at how to enhance existing hiking trails and tie them into parks and other greenspaces, all of which enjoyed enormous popularity as safer recreational alternatives during the height of the pandemic. With the help of a Room Tax grant and the Bradford County commissioners, the EMHR hosted the Bradford County Summer Parks Series in 2019, highlighting three parks in the county with day-long events and activities for all ages.

In 2019, the EMHR was presented with a unique opportunity to work with the overlapping PA Route 6 Alliance. Phase two of their Route 6 Façade and Signage Program provided matching grants to businesses in Bradford and Wyoming counties to renovate the exteriors of their buildings within some historic parameters. By mid 2021, 32 projects representing a total investment of more than $237,000 between grants and applicant matches had been completed.

EMHR administrative assistant Vanessa Billings-Seiler, whom Chamberlin credits with helping him “connect the dots” and bring cohesiveness to all of the organization’s efforts, was tapped to coordinate the façade program and oversee the distribution of the initial DCED grant of $100,000.

“I really enjoyed working with business owners and getting to know the projects and seeing them from beginning to end,” said Billings-Seiler, who has continued with PA Route 6 to oversee phase three of the façade program in Erie and Crawford counties. When visiting with business owners and community leaders out west, she cited the particular success of the program in Wyalusing. Three projects had been funded in the borough, she noted, and, “Within a year, almost every façade on Main Street had an upgrade. That’s what we had hoped to see.”

The increased activity has benefited the EMHR in numerous ways. “Membership is up. We are hosting a lot more events, and we’re invited to a lot more events,” Chamberlin reported. “Other organizations know who we are, and we’ve been invited to join other committees. They realize what we can contribute.” Chamberlin was nominated for and elected as the new Heritage PA president in February 2021. “It’s helped in terms of getting the advocacy and talking about the importance of all 12 heritage areas in Pennsylvania,” he offered. “It created a lot of great relationships with other heritage managers.”

The organization has also made a good impression on the DCNR and the Senate and House appropriations committees, which have increased funding to the EMHR in recent years. When Pickett was first elected to the House in 2000, heritage regions were one of the line items that might get cut first from the budget. “It wasn’t looked at as an essential,” she recalled. “But I don’t hear that now. I think that the EMHR has established itself by making opportunities for travelers and people who live in the region, and I think it’s on pretty solid ground. I attribute that to a lot of the people who helped to get it off the ground and determined what we had to showcase.”

Chamberlin credits the EMHR board members and his “small but efficient staff,” which also includes fiscal coordinator David Hindman.

Under the guidance of Relevant Strategies & Solutions of Haddonfield, NJ, the EMHR is updating its Management Action Plan. “That’s going to determine a lot where we go from here,” said Chamberlin. Among the aspects that have been addressed is the need for a more comprehensive mission statement and vision statement. “We’re still going to have the same mission. We just want it to resonate with more people.”

According to Chamberlin, a lot of ideas have resurfaced that the EMHR did not previously have the leverage to implement. Trail development with the Rail Trail Council, conservation districts, and Countryside Conservancy will continue in an effort to help those organizations close trail gaps. The EMHR looks to partnering with museums and other heritage groups to collaborate on future initiatives.

The EMHR is also the manager of the 444 Club, so called because its members have paddled the entire 444 miles of the Susquehanna River from Cooperstown, NY, through Pennsylvania to Havre de Grace, MD. Working with the SGP and other water trail management groups, the EMHR hopes to produce maps and signage with consistent coloring and logos along the entire water trail, including New York and Maryland.

Community Conservation and Partnership Program grants have become a bigger part of the annual budget, and Chamberlin is looking next to soliciting corporate and business partnerships, not only in terms of financial support but to engage company employees in volunteer days like river and trail cleanups.

“We’re working on being a convener rather than putting all the weight on our shoulders and doing it ourselves,” Chamberlin remarked. “Having partners to help us accomplish those tasks will benefit everyone.”

The EMHR has an aggressive slate of biking, hiking and paddling events planned for 2022. Interested readers can find the schedule online at www.emheritage.org, as well as other ways to get involved with and support the organization. 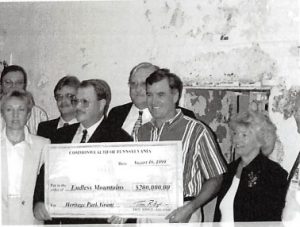 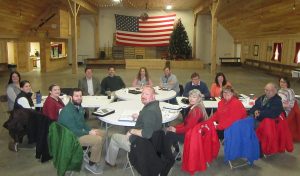 An EMHR Board meeting at the Troy Sale Barn in December 2018. 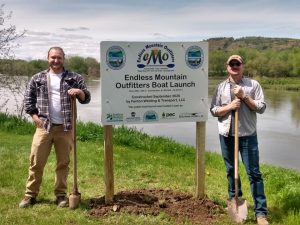 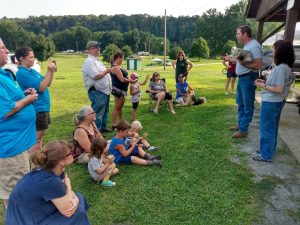 Representatives from Second Chance Wildlife Rescue captivate children at Larnard-Hornbrook Park in Sheshequin Township with help from a friendly opossum.

The LeRoy Heritage Society made good use of EMHR mini-grant funding by putting it toward the costs of an extensive renovation of the Society’s headquarters. 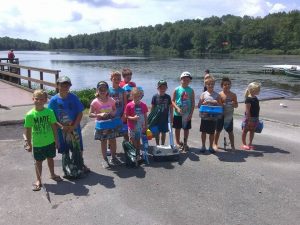 Youths participating in an educational program at Sunfish Pond Park as part of the EMHR’s Bradford County Summer Parks Series in 2019.