Montrose High School social studies and history teacher Hillori Schenker (above, second from right) and students (from left) James Grisafi, Beth Cook, and Anna Campbell told the audience of the EMHR’s public meeting in Susquehanna County how much they have learned about local history thanks to the EMHR’s financial support of their Historic Preservation Club.

Susquehanna County board members of the Endless Mountains Heritage Region (EMHR) conducted a meeting at the library in Montrose on Jan. 22 that highlighted a variety of projects that have received funding and other support from the EMHR over the past two decades. The hosts were pleased with the response to the event, which drew numerous representatives of like-minded organizations who attended to learn how the EMHR might assist them with their own endeavors. 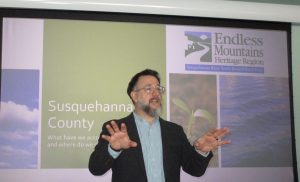 “We want to learn about your specific needs and help you apply for grants,” said Brian Lione (above), who coordinated the meeting with fellow EMHR board member David Palmer. “What does the county want, and where do those needs overlap?”

EMHR executive director Cain Chamberlin (below) noted that this was the first in a series of county-by-county meetings that he hopes to get on the schedule in the future. He provided an overview of 2019’s successes and detailed a number of initiatives on the table for 2020. The EMHR worked with 12 organizations and entities last year that had received a combined total of $54,000 in mini-grants. That amount has been increased to $61,000 for 2020. 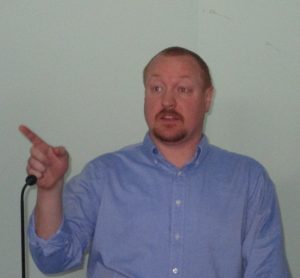 EMHR funding recipients who were present touted the annual Mini-Grant Program as the fast track to funding for a lot of smaller projects that can pave the way to broader objectives, which was matched by grant recipients to make the overall amount in the county through EMHR’s program well over $1 million.

Christine Dettore, northeast regional adviser for the Pennsylvania Department of Conservation and Natural Resources (DCNR), which provides a designated funding stream for the EMHR, referred to the mini-grants as the “icing on the cake” with a relatively easy application process and almost immediate availability of funding to quickly get projects underway.

Presenters included rail trail director Lynn Conrad, Sandy Wilmot of Clifford Township, a history teacher and three students from Montrose High School, representatives of the Dennis Farm, water trail manager Dana Rockwell and members of other partner agencies. Each credited the EMHR for their long-running successes, often funded one piece at a time via mini-grants.

“We would not have achieved what we have if the EMHR had not believed in us from the start,” said Denise Dennis, co-founder of the Dennis Farm Charitable Land Trust (DFCLT), in a letter read by her brother Darryl Gore (below,left). The Dennis Farm has been the recipient of three mini-grants since 2006, helping to fund a feasibility study, an interpretive plan and the installation of 10 interpretive panels spread across the two-century farmland owned by free African-Americans since 1793. 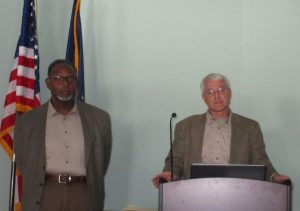 “It will be a destination,” said Wade Catts, DFCLT board member and archaeologist. The EMHR has helped to make the goals of restoring the old farmhouse into a heritage education and cultural site more obtainable. The work of the DFCLT has caught the attention of the National Endowment for the Humanities, which has offered a $400,000 grant with a $1.2-million match. “I think that it’s the three grants from the EMHR that has helped us to get this grant,” Catts (above, right) stated.

“The personal contact with these people is what makes it doable,” Wilmot said of the EMHR staff, the DCNR and the Endless Mountains Visitors Bureau (EMVB). By successfully applying for mini-grants, Wilmot (below) and a relatively small group of dedicated individuals have enhanced the Clifford Township Historical Society Museum and the Clifford Children’s Garden and restored Yarn’s Cider Mill and the Hoover Schoolhouse. 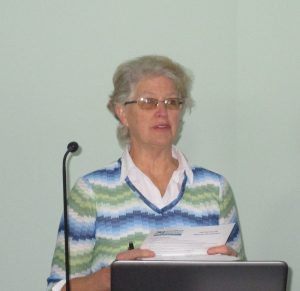 To accomplish so much in a rural community without having to solicit the same few businesses or hold continuous fundraisers has been a blessing, Wilmot explained. “There are many smaller organizations like ours that could benefit from the EMHR.”

Montrose High School social studies teacher Hillori Schenker didn’t ask for much money to get a Historic Preservation Club started at their school, but it has already been an eye-opening experience for the students involved. Their first big project was to digitize 10-year old self-guided Walking Tour brochures and add new photos. This year, they are applying more academics than technology by learning about the design and architecture that went into iconic buildings in the county.

“I always wanted to know more about the history of Montrose,” club member Beth Cook told those in attendance.

Montrose senior Anna Campbell credited her family for instilling a love of history in her and said that the Historical Preservation Club is helping to prepare her for history studies in college.

Chamberlin cited the program at Montrose High School, in particular, as one that he views as a template that could easily be replicated in other school districts across the Endless Mountains.

The Susquehanna County meeting achieved two additional goals of organizers in that it drew numerous area residents who sit on boards of small organizations that have yet to partner with the EMHR who learned of ways in which DCNR funding can be used. The event also caught the attention and approval of Susquehanna County commissioners Betsy Arnold and Judy Herschel, both of whom congratulated the presenters on their accomplishments and for bettering the county.

“I’ve learned a lot today,” said Ellen Aherne of Harford Township, quickly detailing her take-aways from the meeting. “It’s great to know what we have around here.”

Her husband Michael echoed her sentiments and deemed the presentations enlightening as the couple shifts their attention to “other concerns and bigger, broader issues” after successfully raising seven children in the county.

“I have so many ideas, I don’t where to start,” Jeralyn Adams of Montrose said after the meeting. In addition to the possibilities that she believes the EMHR might offer area organizations, she remarked, “I’d like to see our heritage preserved for my grandchildren.”

To learn more about the DCNR Mini-Grant Program and events that the EMHR has planned for the coming year, interested readers may log on to www.emheritage.org. The EMHR will host a grant workshop at the Dietrich Theater in Tunkhannock on Thursday, Feb. 27. There is a $10 fee for non-members and no cost for members. Registration is requested at 570-265-1528.