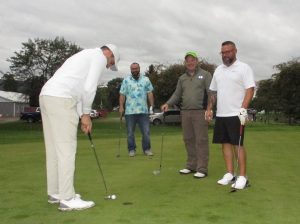 It doesn’t seem to matter whether they are shooting sporting clays or 18 rounds of golf, employees of companies providing support to the natural gas industry get excited about helping Williams’ Bradford County Supply Hub raise money for the United Way of Bradford County (UWBC). Proceeds from entry fees, sponsorships and other donations at the event held on Oct. 7 will help the agency realize its 2023 goal of $565,000 to assist as many as 75 local nonprofit organizations next year.

“The UWBC is fortunate to have dedicated organizations like Williams working every day to improve the lives of our residents in Bradford County,” said UWBC board member Darlene Innocenzo. “And we are committed to ensuring that our partner agencies have access to the funding and the public attention they require to pursue their missions.”

Prior to the pandemic, Williams conducted a sporting clay contest to help the United Way. When they were able to conduct an in-person fundraiser again last year, they found that ammunition was in short supply and cost-prohibitive. This is the second year that the pipeline company has hosted a golf outing at the Towanda Golf Club as an alternative, and it has been a big hit.

“It was just a lot of fun. Everybody’s a winner,” said Anthony Liberatori, director of business development and energy services for Proconex, a provider of process automation controls and other systems for the gas industry. “It’s a great mixer for a great cause.” Proconex employees also routinely participate in Williams’ annual barbecue cook-off in Tunkhannock that benefits the United Way agencies in Wyoming and Susquehanna counties in Pennsylvania and Broome County in New York. Wyoming County UW director Kristen Huff’s husband, Bill Huff is a Proconex employee, which makes the mission a bit more personal for the Proconex crew.

Flanders, Inc. has also participated in both the golf tournament and barbecue event, as well as supporting United Way agencies in other areas where they do business, like Evansville, IN. “We get involved in the communities we partner with and live in,” said Flanders account representative Mike Johnson. “As a resident of Bradford County, it’s important to me to give back when you can”

Sue Conner of Williams is a United Way board member, following in the footsteps of two of her supervisors at Williams. “Each shared their experience and the work this organization does, and that struck a chord with me,” Conner offered. “The number of recipients our local United Way touches is incredible.” Beneficiaries of funded organizations vary from people and animals in need to those supporting the arts, preserving history, and promoting 211 calling. “You would be hard pressed to find anyone in our community who hasn’t been touched in at least some small way by a program that has benefited from the United Way of Bradford County.”

According to Tammy Bonnice of Williams, employees there rally behind every component of outreach that is proposed to them and have taken the annual golf outing to heart. “The golf tournament is great fun, and our employees arrive early in the morning, eager to help set up, sell raffle tickets for donated prizes, and host games at various holes along the course,” she stated.

Raffle prizes up for grabs this year included a garden bench, several fire pits, a trail cam, a seafood boiler, trail cam, barbecue grill, and a wheelbarrow full of cheer. A Wheel of Fortune set up on one of the fairways guaranteed that every participant picked up some Williams swag. In addition to donating prizes, some vendors also participate in the event by setting up cooking stations to feed golfers as they move through the course.

The United Way of Bradford County will turn 45 in 2023, so board members and staff are especially excited about the campaign now underway. “We have much work to do and no chance of doing it without this kind of support,” Innocenzo stated. “I would like to express sincere appreciation of Williams and their many sponsors. Your donations are improving lives, because together we can create positive change.”

“They are one of the best companies ever to work with,” Liberatori said of Williams and their charitable endeavors. “We always like to take part in whatever they are doing.” 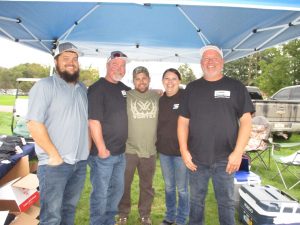 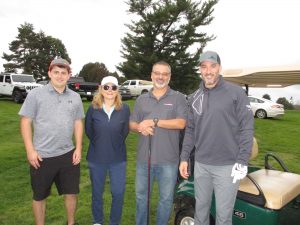 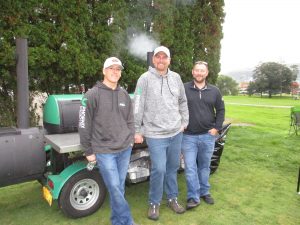 Setting up a portable smoker on the golf course and serving pulled pork during the Oct. 7 outing for the United Way were (from left) Mike Brobst and Tim Nierstedt of Phoenix Specialty and Mike Birmingham of Williams.