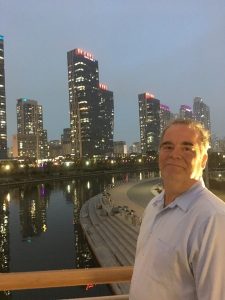 Chris McPherson (above) is an American biochemist working and living in South Korea, just across the Yellow Sea from mainland China, as seen in Google map at top, and the epicenter of the cornavirus outbreak.

While news of the coronavirus that seems to have engulfed China also dominates news feeds here in the United States, those who frequently travel to Asia, as well as their loved ones who remain stateside endeavor to balance legitimate concern with the media hype.

Chris McPherson, a 1983 graduate of Towanda Area High School and later Penn State University, where he earned degrees in chemistry and biochemistry, has lived and worked in Songdo City, a suburb of Incheon, South Korea, since 2018. He is the director of the purification department at a company that manufactures biologic drugs that are shipped worldwide.

McPherson was recently home in Boca Raton, Florida for two weeks, watching newscasts with his wife, Roseanna, and stateside neighbors, not knowing how his coworkers in Korea and other residents of Songdo were dealing with the potential threat of the disease.

When he returned there on Feb. 3, he reported, “Everybody here is freaking out about the virus. We are being asked to wear masks, wash hands and avoid gathering in crowds.” On a lighter note, he added, “no waiting in the cafeteria, as it’s half empty.” Since then, McPherson noted, reaction has been more reserved among the people he sees on a daily basis.

“Initially, there seemed to be more concern among the Koreans than the expats but, with more information and response from the government their concerns seem to have dissipated,” he remarked.

McPherson manages a staff of 92 employees, all Korean and speaking English as a second language. The company has about 2,500 employees, including about 100 people from other nations who are referred to as “expats.”

The Korean peninsula is attached to mainland China. Officials in highly unstable and unreliable North Korea are denying reports from Seoul, the capital of South Korea, that its northern neighbor is facing a potential crisis and that there have already been multiple coronavirus deaths in Sinuiji, a northern border city.

Conversely, McPherson credits South Korean government officials for being proactive with the issue of health alerts and encouragement for citizens to take precautions. “Things have calmed down over the last week with the spread of better information,” he stated. “I receive updates in Korean every night through the speaker in my living room.”

A poster in the lobby of his apartment building is typical of those throughout the city that caution people to take aggressive measures similar to those employed during an outbreak of seasonal flu viruses. A text alert McPherson received, translated from Korean, read “In order to prevent the spread of the new coronavirus, please observe personal hygiene such as washing your hands and coughing etiquette and refrain from visiting medical institutions as much as possible.” 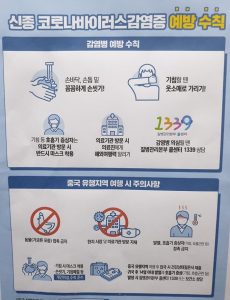 Not all of Incheon’s residents feel the same, of course. A Korean coworker of McPherson’s shares his view that cooler heads and a measured approach to the crisis will prevail. But her friends were upset to learn that she planned to visit friends in a neighboring city by train, due to the inevitable closeness to strangers.

“So, my perspective and that of my coworkers may be influenced by our jobs and our education,” he conceded.

Considering that the task of McPherson’s and his staff are tasked with ensuring a sterile environment for the production of pharmaceuticals, it’s understandable they share a different mindset of avoiding the virus than the average population. Because the Korean peninsula is prone to smog from mainland China, Chris already maintains a supply of masks. He suggests that the pragmatic culture of South Koreans in general affirms his sense of security and, for the most part, his family is comforted.

“He might be close to the epicenter of the outbreak, but there is still a lot of country between him and the virus,” said his brother Tod, a THS graduate of 1979 who now lives in State College. “The South Koreans are a very civic-minded and conscientious people and will do what they can to minimize the impact.” 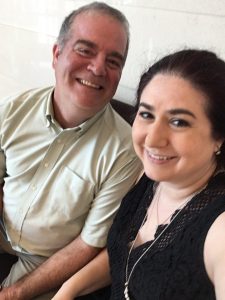 Chris’s wife, Roseanna, most recently visited Chris in Songdo City in October 2019. She admits that she isn’t much of a news watcher and that she follows her husband’s lead on the situation. “I was concerned when the doctor who diagnosed the virus died,” Roseanna said, “but Chris tells me of the precautions they are taking at work, and he’s being careful as well.”

“I’m wearing the mask as recommended. I wash my hands regularly as part of my job and have been avoiding the subway for now,” Chris stated. “I really don’t fear it. It’s similar to my outlook on the flu. I don’t want to get it, and I take precautions to avoid it.”

Chris’s parents, Ed and Lois McPherson talk with him every Saturday night, but see the news stories on the days between those calls from their home in Monroeton. Ed pointed out that more people in the United States die from the seasonal flu every day. Mothers, of course, have their own take on any situation, and Lois admits that she is concerned because of Chris’s proximity to the situation.

His profession affords him a unique perspective and shapes the message that he sends back home. “There are 51 million people in Korea, and 28 got the coronavirus. Four of them have been cured, and the rest are in stable condition,” McPherson remarked. Getting the virus in the first place, he suggested, is as unlikely as winning the lottery. “It’s probably not going to happen.”