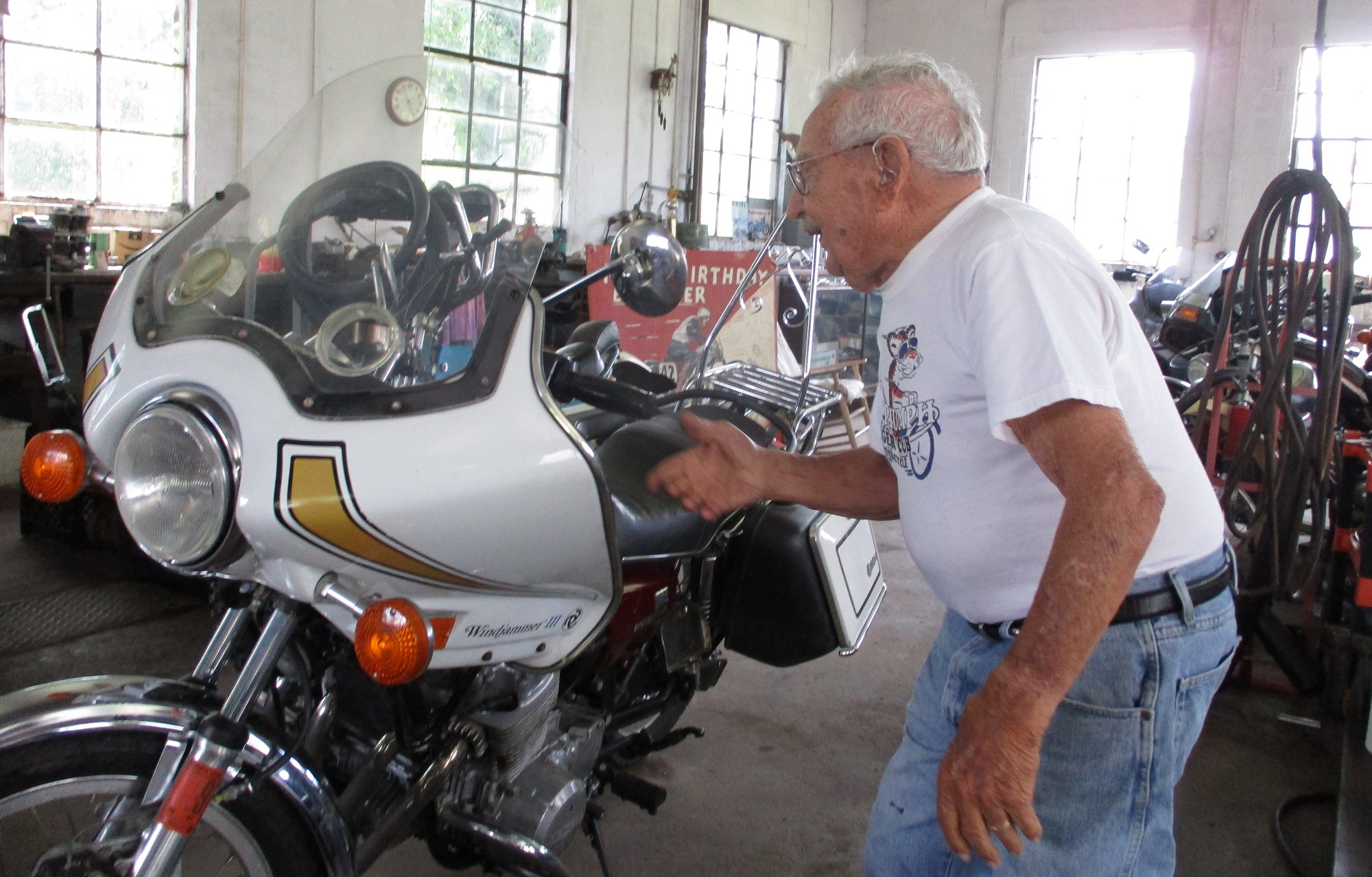 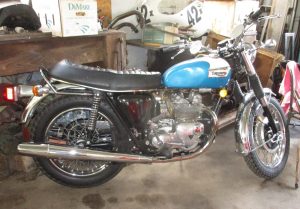 It’s hard for “Fast Eddie” Fisher to pick a favorite from the countless motorcycles he has ridden in his lifetime, but a fairly uncommon 1972 Honda 750 (top) is one that he likes to show to visitors. He was the lead racer for the Triumph Motorcycle company from 1952 to 1957 and still has a number of their bikes in his collection.

One cannot get much farther from the spotlight than Shunk, a village nestled in the Endless Mountains of Pennsylvania in northwestern Sullivan County. But one of the world’s premier motorcycle racers from the dawn of the sport has made it home for he and his wife. It’s a quiet respite – unless, of course, this racing legend happens to be firing up the engine of one of 20 or more bikes he still maintains in his collection.

Originally from Chester County, Ed Fisher climbed onto the seat of an Indian motorcycle at the age of 16. He lived and worked on a farm and saved $95 to purchase the bike because he needed a way to get around.

While Indian had been manufacturing two-wheeled vehicles as the Indian MotoCycle company since 1901, the machines were still considered a fairly rogue form of transportation in 1941. But Eddie, smaller in stature than most boys his age, found that he could make them go fast.

The farthest thing from his imagination was a racing career, until he entered his first race in Richmond, VA. On a half-mile track, he was pitted against Paul Goldsmith, a paid rider for Harley-Davidson. Eddie came in first. “I road harder,” he says of his simple riding strategy.

Eddie began winning races on local and regional circuits, beating men with bikes that were supposedly stronger and faster. Racing was still just a hobby for Eddie, however, and a sport that most Americans still regarded as part of the daredevil circuit. Opinions differed as to whether or not Eddie’s passion could lead to a career.

“Some of my friends thought it was a great idea,” Eddie recalls, though he noted that his family was not as enthusiastic. “I was the first ones in our family to do something like this.”

One day, as he was working a typical 14-hour shift at his service station northwest of Philadelphia, Triumph Motorcycle company executive Rod Coates visited him and asked if he would like to ride a new Triumph in a race at Daytona. Coates too was a racer and had been referred to “Fast Eddie” by Jacques DuPont. Eddie’s enthusiasm for the opportunity could not have been higher, but a broken oil line cut his first Triumph race short. 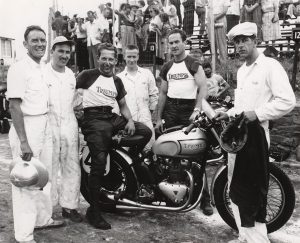 In his second year of riding Triumphs, Eddie finished second in the 100-mile National Championship road race at Laconia, NH. He returned in 1953 to take first place in a close and hotly-contested contest. By then, Eddie owned a Triumph dealership, and he raced exclusively for the company through 1957, after which he switched to sportsman racing. He continued to rack up wins at dirt tracks and in hill-climbing and drag racing events across the country.

His son, Gary, was also a racer who won the Loudon Classic in 1972, making he and his father the first father and son to accomplish the feat. Eddie also had a daughter, Fay, with his first wife, the late Romaine Fisher. 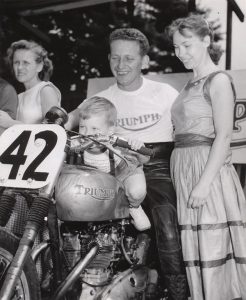 Eddie bought some property in Sullivan County in 1965 and eventually moved there in 1990, where he opened a garage in Shunk and continued to build his collection. Down from its peak of 50 pieces, Eddie still has a story to tell about every bike, whether it be where he raced it, where he came upon it, or simply what he likes most about it.

One of his favorites is a 1972 Honda Cb 750 Automatic. “There were only a few of them made, and they didn’t sell many of them either,” he explained. The oldest bike he owns is a 1929 Indian Scout (below) that still runs great. Needless to say, he still has a number of Triumph bikes, two of which he took to a show in Oley, near Reading, last week. 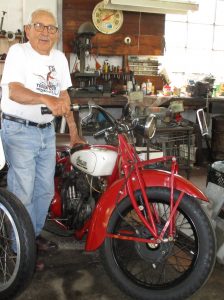 The latest addition to his collection is a three-wheeled 2012 CanAm Spider (below). “The only time my boots have to touch the ground is when I’m getting off it,” he related. 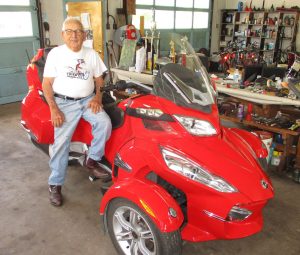 Eddie met his second wife, Suzi, in Ohio in 2002, the same year that he was inducted into the AMA Motorcycle Hall of Fame. Suzi is no stranger to bikes, having worked at the Motorcycle Hall of Fame in Pickering, OH, for three years. “We knew a lot of the same people in the motorcycle world,” she related, including Suzi’s father and uncle who both bought and sold bikes on an international level.

Though he feels that his racing days are (all but) behind him, Eddie still regularly goes for rides and enjoys the familiar sites and smells of rural Sullivan County. He says that he can take in more on a bike than from the driver’s seat of a car or truck, and fellow riders occasionally pick on him for being seemingly incapable of slowing down.

People sometimes also question the obvious difference in age between Eddie and Suzi, who only refers to herself as “a bit younger.” But even she admits that her husband can be hard to keep up with. “Can you imagine someone in their 90s throwing a leg over a bike and doing what he does?” Suzi remarked.

At 94, Eddie suggests that he might have one more race in him, pointing to a Honda VTR in his garage that he’d like to ride in a vintage meet next year.

In the meantime, “Fast Eddie” admits that he retired to Sullivan County to get away from the urban sprawl that progressively erodes the country lifestyle he once knew in Chester and Lancaster counties. He refers generally to Chester County as a “four-lane highway with traffic jams every day.” 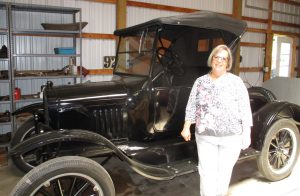 Eddie keeps a few classic cars in a separate garage, including this fully-restored Ford Model-T, which he and wife, Suzi (above), occasionally ride to community functions. 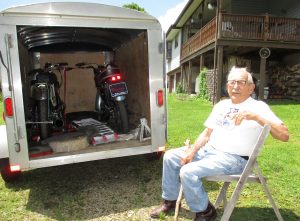 Eddie takes a brake after loading to classic Triumphs into a trailer for transport to a bike show in southeastern Pennsylvania last week.