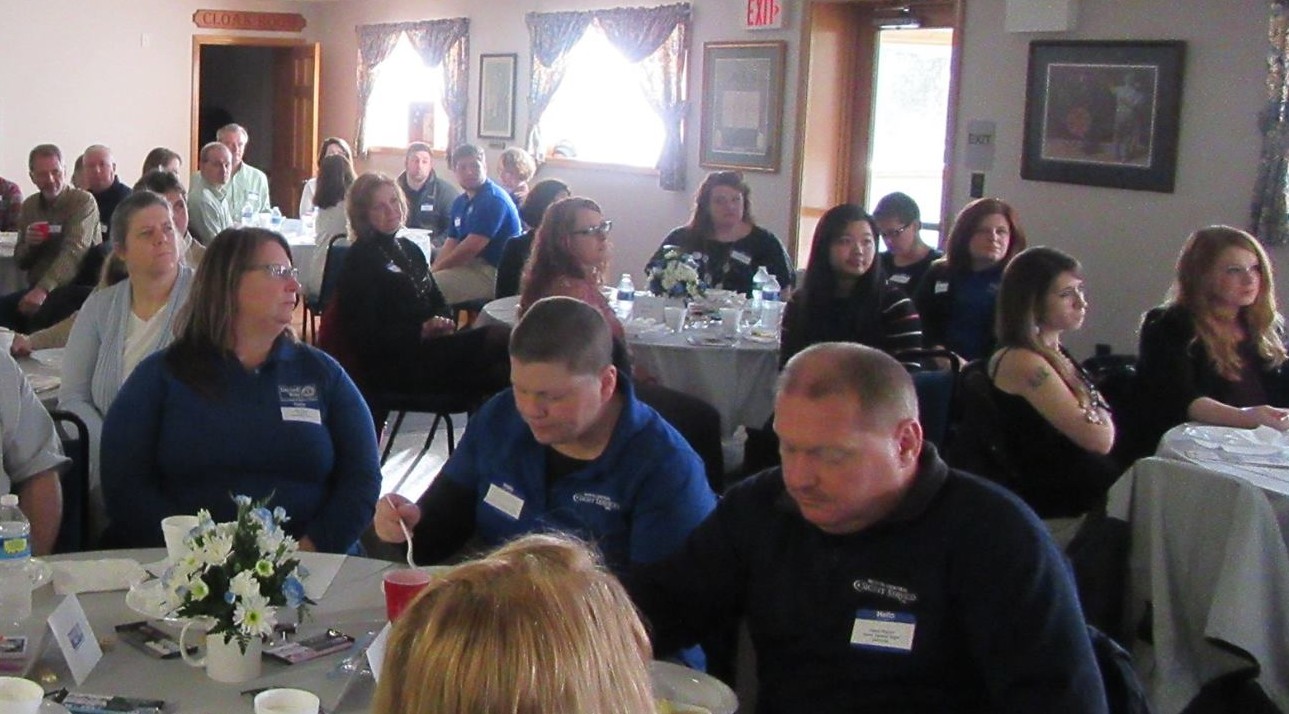 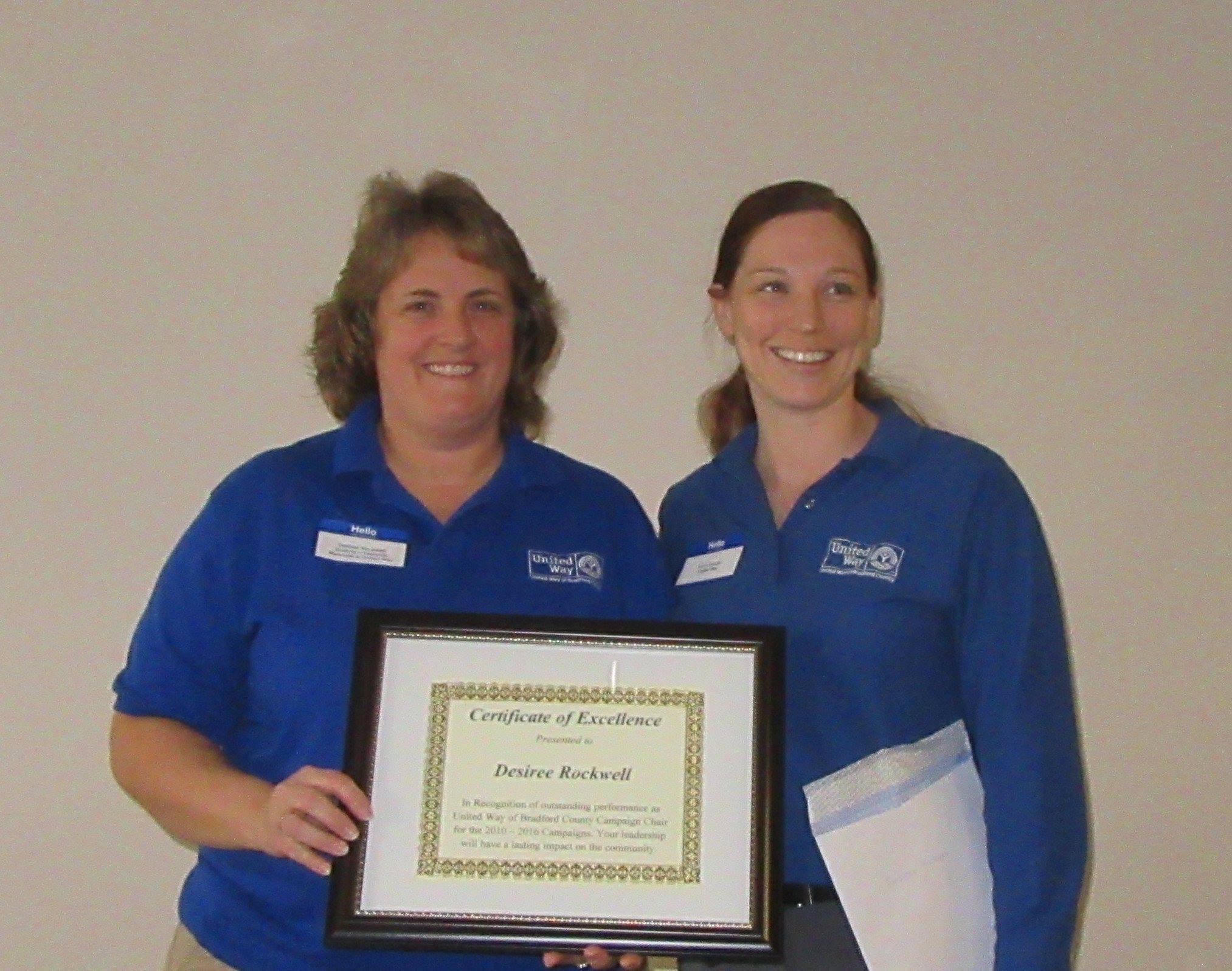 Supporters and board members of the United Way of Bradford County (top) celebrated another successful year and sadly accepted the resignation of Desiree Rockwell (above left), who emceed a final Victory Celebration with UWBC director Kerri Strauss after seven years of serving as campaign chair.

The United Way of Bradford County surpassed its goal of $475,000 in 2015 and thanked numerous individuals and company representatives during the course of a 90-minute breakfast banquet on Feb. 4. The annual event, held at the Towanda American Legion, culminated with the distribution of 24 prize packages ranging in value from $25 to $500.

Nearly a third of all money donated this past year came from individual employees, noted 2016 campaign chair Desiree Rockwell. A list of the 20 companies, agencies and school districts revealed that employees of Cargill Meat Solutions of Wyalusing and P&G Paper Products of Mehoopany were among the biggest contributors.

Cargill, this past year’s corporate sponsor, was cited for Top Company Employee Campaign, and P&G was credited for the Largest Increase in Employee Participation.

Upon accepting the award, Cargill HR manager Maria Wurzler (below, right) noted that the number of employees who donated $500 or more increased from 76 to 114 during the last year, helping the company to raise more than $158,000 and surpassing the million dollar mark in total donations through the years. 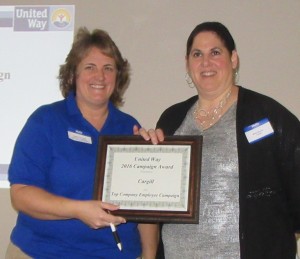 “We still have not found the limits of what our employees are capable of giving,” said Alex Fried (below, right), public relations and energy affairs manager at P&G. In just the last seven years, he added, employee contributions have risen from about $100,000 to more than $400,000, which is disbursed to six United Way chapters as per the employees’ respective municipalities. 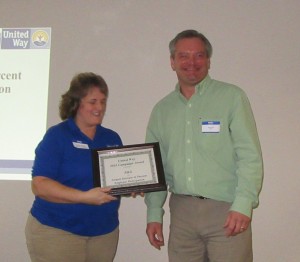 Martha Lloyd Community Services was recognized as raising the most of any new company joining the campaign last year. Futures Community Support Services was awarded for conducting the most successful campaign by a Nonprofit group. The Towanda School District was a repeat winner of the Largest School Campaign award.

Towanda School District superintendent Steve Goble (shown below with Rockwell, left, and UWBC student ambassadors Laura Larkin and Ben Jenkins) said that much of the money was raised through Black Knight Pride Day, conducted weekly on Fridays, when teachers pay to veer from their usual dress code and don the schools’ orange and black colors. 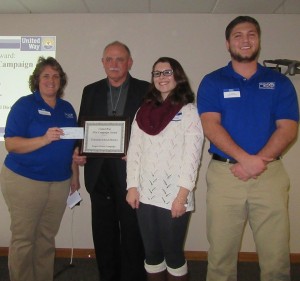 Rockwell thanked several companies, including Penelec First Energy and Williams Bradco Supply Hub for participating in Day of Caring events last year, on which employees are paid for leave of their duties to perform tasks for recipient agencies.

Jody Place (below), manager of external affairs for Penelec, related that she and her fellow employees enjoyed helping to paint a picket fence and perform other maintenance at French Azilum, Inc. “It gives us an additional perspective of all of the extras that the United Way gives to our community,” she remarked. 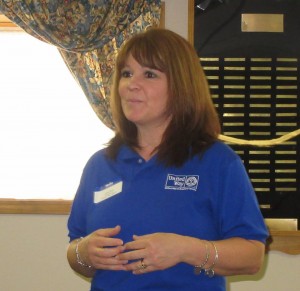 A game of Wheel of Fortune that pitted teams led by UWBC board president Robert Hugo and VP of Allocations Elaine Elliott (below) against each other. Elaine’s won. Then the real winning began as employees who had donated at least one dollar weekly as part of the UWBC’s Pledge to Win initiative were given prizes as varied as airplane rides and date night packages. 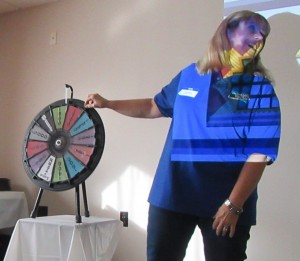 Dupont employee Carl Hooper (below, right) was the big winner of the night. The last name of 24 called, Hooper scored the $500 Tops Market gift card. 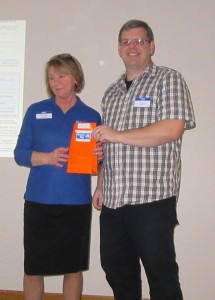 Amidst all of the festivities was the bittersweet recognition of Rockwell as campaign chair, though she will remain on the board. Executive director Kerri Strauss credited Rockwell for overseeing the intake of more than $2.8 million in donations in the seven years that Rockwell has served in the position. She will be followed as campaign chair by MaryRose Shaylor.