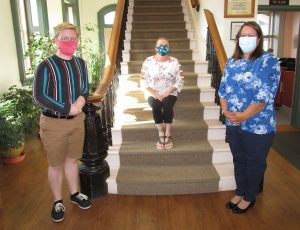 A rash of calls from concerned registered voters to the Elections Office at the Wyoming County Courthouse prompted county elections director Flo Kellett to bring some clarification to some of the issues associated with the November general election, especially those pertaining to mail-in voting.

“In the last two days, I’ve had 25 people call and cancel their mail-in ballots,” Kellett said on Tuesday morning. There are still 2,613 country residents set to receive ballots by mail as early as mid September. “People are so confused with all these stories about the postal service that they are afraid their vote won’t be counted.”

Mail-in voting remains a viable and safe option to going to the polls, Kellett maintains. In the 18 years that she has worked in the elections office, there has never been a problem with the post office getting ballots back to the courthouse. “The only ones we don’t get back are from people who wait until the last minute,” she stated. In fact, Kellett noted, postal employees have delivered ballots right up to 8 p.m. on election night.

The challenges this time around are related in part to the coronavirus pandemic and also the fact that mail delivery has slowed down. The average turnaround for a piece of mail is now five days. Election Day is Tuesday, Nov. 3. If a voter requests a mail-in ballot closer to the Oct. 27 deadline, Kellett explained, there may not be enough time to get the ballot back.

If someone with a mail-in ballot does not have at least 10 days to return it by mail, Kellett suggests that he or she bring it to the courthouse. Though the courthouse is still operating by appointment only, she noted, the deputy can summon her to come to the door to get a ballot.

Beyond maintaining that mail-in voting is a secure method for casting ballots, Kellett wants to be sure that voters understand the rules and their options.

There are two courses of action, for example, for those who decide it is too late to mail their voted ballots back: deliver it in person to the courthouse prior to 8 p.m. on Election Day or surrender the balloting material received in the mail to the judge of elections at your respective polling place in exchange for an election day ballot. You cannot, however, return a ballot to your polling place that has already been filled out.

Most importantly, ballots cannot be returned by anyone other than that registered voter, as per the state’s election code. That’s why, Kellett related, there are no drop boxes elsewhere in the county as there would be no way to know who dropped off the ballots.

All ballots received prior to Nov. 3 are kept in a vault until election day. Pennsylvania presently does not allow for the counting of mail-in ballots until Election Day. There are no changes in polling locations since the Primary Elections, and all polling places in Wyoming County will be open.