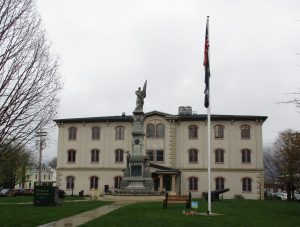 The Wyoming County Commissioners moved through an ambitious agenda on Tuesday morning that addressed the discontinuance of a special needs program at HANDS of Wyoming County, a plan to prevent storm runoff from overwhelming sewage treatment, a safe transfer site for children under shared custody, and an upcoming electronic recycling event. Also discussed was the early retirement of some county employees as a means to save money.

The commissioners spoke briefly of last week’s freak snow storm and power outages, noting that the courthouse in Tunkhannock was without electricity for two days. Both the Wyoming County Correctional Facility and the County EMS buildings have multiple backup generators, and the transition for them was pretty much seamless. The delay in getting the courthouse back up and running, they explained, was because the electric workers had to complete three phases of restoration. While it might have been possible to bring the courthouse back on line between the second and third phase, rolling “brown outs” could have crippled the computer system there.

The commissioners expressed deep concern and confusion over a decision by the Hazleton Area School District (HASD) to discontinue an early childhood intervention program that they consider vital to Wyoming County. The program sanctioned by the Pennsylvania Department of Education provides additional support and resources for children with developmental delays and has been provided by the Hazleton Area Education Support Professional Association to HANDS of Wyoming County, which operates in the former Mehoopany Elementary School.

As the commissioners understand it, the reason the program ended was because HANDS lacked an aide to complete the staff. Commissioner Rick Wilbur maintained that the program, which is otherwise covered by existing HANDS staff, has only recently incurred a temporary change when an existing aide took a planned family leave.

Among the concerns are that the job opening had only been posted in the Hazleton School District, which provides the service to both Luzerne and Wyoming counties. Wilbur remarked that Hazleton is “a world away” from Wyoming County and questioned the possibility of attracting a viable candidate for the part-time position from such a distance. The commissioners have also not been provided any assurance that the program will resume if a qualified aide is found.

“That’s going to be one of the first questions I ask them,” Wilbur said of a planned meeting between the commissioners, HANDS representatives and the HASD. In the meantime, HANDS has posted the job opening on their Facebook page as follows: 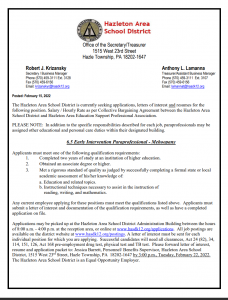 Storm Runoff at Prison To Be Diverted

While the Wyoming County Correctional Facility is not the only contributor to a stormwater runoff problem on which the commissioners have been working with the Tunkhannock Municipal Authority (TMA) for the past year or two to remedy, the jail has been cited by the PA DEP as a key culprit. When the current prison was constructed, it was common practice to direct rainwater into the existing sewer system.

But treating wastewater is expensive enough without unnecessarily adding stormwater to it, and new DEP criteria requires that a stormwater runoff system be able to handle a 25-year rain event.

The commissioners have submitted a grant proposal through Sen. Bob Casey’s office for a $400,000 project that would separate the prison’s storm discharge and send it to the river via new pipes along Warren and Tioga streets. The county must provide a 20 percent match, which will come from American Recovery Plan (ARP) funds.

Until the availability of the grant was known, the commissioners had considered a plan that would have solely used ARP money to move the water from the jail to Swale Brook, if necessary easements could have been attained. By collaborating with the TMA, commissioner Tom Henry related, the borough of Tunkhannock will also benefit from the project.

Owing to the uncomfortable truth that the transfer of children between estranged or divorced parents does not always go smoothly, the commissioners are considering using ARP funds to install additional cameras and brighter lighting at the Wyoming County Emergency Management building to provide a safer environment for such hand-offs.

The Pennsylvania State Police barracks is currently the only official location for custodial transfers, and the commissioners believe that the EMA building will provide more room, and the facility is fully staffed 24 hours a day with employees watching monitors. “If there’s a problem,” commissioner Henry said, “they can call the police.”

Retirement Approved – May Be More to Come

The commissioners sent out letters this past week to county employees 65 years and older, offering them an early retirement and a buy-out of their current contracts. One such buy-out of a female employee in the Juvenile Probation Department was approved at the April 26 meeting, and another of a male employee is pending.

“We are not eliminating these positions,” Henry stated. “We are just not refilling them.” The positions can be reopened, he noted, if the need is justified.

In such a case, commissioner Wilbur added, a younger person would be hired at a lower wage to save the county money. The commissioners are considering a second round of buy-outs for employees 60 and older.

Saturday, May 14 is the next day scheduled for the county’s twice annual Electronic Recycling Day. While many items can be dropped off at no cost, there is a nominal fee for other items as shown below. And all drop-offs must be prearranged by calling the recycling center, which is located off Route 92 in Tunkhannock Township. 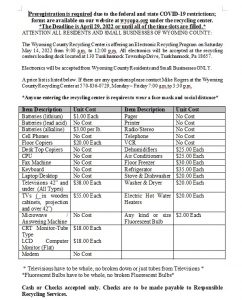 Concurrently, EIO Waste Solutions in Beaumont is working with the county to provide a place for residents to dispose of other large items that can not be put out with regular trash, such as tires, mattresses and paint cans.

“We are not contracting with them,” Henry related. “They’re just helping us with it.” Henry sits on the county’s Solid Waste Board as do representatives from EIO Waste Solutions.

Commissioner Ernie King cited the willingness of EIO to work with the county as a great new service for county residents. “It’s very convenient to drive right in onto the scales,” he remarked.