Dennis Farm Symposium Aims to Bridge Past with Future 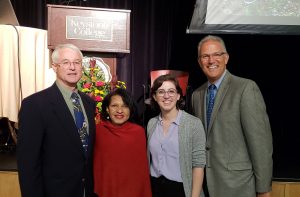 Several hundred people took part in events associated with the sixth annual Dennis Farm Symposium on Oct. 10 and 11. Students from Keystone College made up much of the audience at a forum focused on racial understanding on Wednesday evening, and the audience for Thursday’s seminar was representative of a cross section of local residents wanting to know more about the historic site in Susquehanna County and the pioneers who founded it.

“I’ve lived here all of my life and had to know what this is all about,” said Nancy Place of Tunkhannock Township prior to the program, which she attended with other members of the Vida Rose Red Hatters.

As the restoration of the Dennis Farm, situated southwest of Kingsley in what was once Hop Bottom Township, inches ever closer to becoming the historical destination that its descendants and supporters envision, new evidence surfaces every year that places Prince Perkins and other free African Americans who came to Pennsylvania from Connecticut after the Revolutionary War among the county’s most formidable founders.

Prince Perkins, whose granddaughter married a Dennis from Dimock and inherited the farmstead, was a fiddler and often the focal point of community events.

“He did not get the memo that he was supposed to be a second-class citizen,” said Denise Dennis, direct family descendant and president and CEO of the Dennis Farm Charitable Land Trust (DFCLT). The family frugally parlayed their war pensions into land purchases and other wise investments that brought the Perkins-Dennis clan a social prominence and wealth that few African Americans in the rest of the new nation experienced.

“I loved hearing the historical accounts from Denise Dennis and how accepting most of the locals were to a black family in the 1700s,” said Endless Mountains Visitors Bureau director Jean Ruhf, who attended Thursday’s presentation in Brooks Hall at Keystone College. “I knew how important the Dennis Farm was to our region. What I learned from today’s event is the significance it has to our entire country.”

The fact that many black Revolutionary War veterans purchased property and started farms in Bradford, Susquehanna and Wyoming counties is a slice of history lost on many Americans, including those who have lived here most of their lives. While the history of the Perkins and Dennises, whose properties stretched from Hop Bottom to Dimock and Auburn townships and who became a celebrated part of society due to their talents and intellect, seems somehow Utopian or idealistic, the family members were subjected to the same racial scrutiny that persists to this day.

That is why Denise preceded Thursday’s main event with “It Begins with Each of Us: Fostering Racial Understanding.” Approximately 50 people attended the forum, which was also held in Brooks Hall. Students were encouraged to compose essays about the event, the best of which will earn cash prizes.

“The panelists provided compelling insight into the sociology, anthropology, and history of race relations in America,” noted Cain Chamberlin, director of the Endless Mountains Heritage Region, which helped provide funding for the DFCLT’s interpretive plan. “Despite society having made significant strides, we still have a long way to go.”

“Stereotypes are learned, and they can be unlearned,” was the primary take on the forum for Natalie Krak, who attended on behalf of state Department of Agriculture secretary Russell Redding. “We ended up talking about what we can all do to address racism in our own communities.”

“Given the current state of divisiveness among Americans, I feel having forums and conversations like this is just as important now as they were during the 1950s and ’60s,” said Chamberlin.

“I feel that it’s a model that could be replicated in other places,” Krak concurred.

Additional highlights of Thursday’s event, which was facilitated by George Stark, community outreach director for Cabot Oil & Gas and an adviser to the Dennis Farm, included an overview of the progress of the DFCLT’s endeavors in 2018 by board member Wade Catts, a study by Winterthur-University of Delaware graduate fellow Emily Farek on insight to the Dennis’s lifestyle unveiled by the layers of wallpaper in their farmhouse, and a number of Dennis family anniversaries and milestones shared by Denise Dennis.

Denise credited her father for instilling the importance of history and family heritage in her. “I’ve known Prince Perkins’ name since I’ve known my own,” Denise related. “We were not the only African American family with this kind of history. But ours is documented.”

Future plans are to complete the restoration of the Dennis’s last house on the farmstead so that it can be used for exhibits and small meetings. Foundation remains, miles of stone walls, and orchard stock are also being restored. A permanent parking area will be installed, and a new building will serve as a visitors center and hub for events and celebrations. Interested readers can find more information about the history, future plans for the site, and how to make arrangements for group tours at www.thedennisfarm.org. 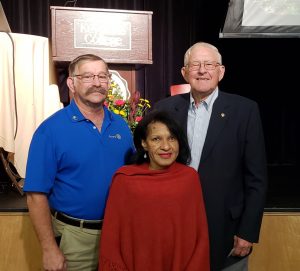 Richard Zich (left), David Palmer (right) and Denise Denise are each descendants of families who have made south-central Susquehanna County their home for centuries.