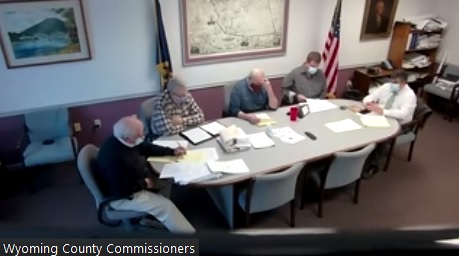 As much as some aspects of life and business are returning to a sense of normalcy, issues related to the COVID-19 pandemic were front and center again at the March 16 meeting of the Wyoming County Commissioners. A stalled vaccination clinic was discussed, as well as new COVID relief for the hospitality business and the potential for an event to memorialize those in the county who have died from the virus.

Wyoming County is fully prepared to conduct a mass vaccine clinic as soon as word is received from the federal government and Pennsylvania Department of Health (DOH) that a significant number of doses of the vaccines are definitely on their way.

The commissioners had announced at previous meetings that the plan for a drive-through vaccination clinic coordinated by administrators of the county’s EMA and others had been approved by the DOH. The Tunkhannock Rotary has assisted in registering volunteers, which commissioner Rick Wilbur said are numerous and from a wide variety of backgrounds. A follow-up survey was emailed to those who were registered, asking participants of their availability on some potential dates.

Nonetheless, for every tidbit of information that has been released, the commissioners and EMA have expressed frustration at not being able to say more.

“It has been excruciating,” commissioner Tom Henry said on Wednesday morning. “We were one of the first counties to be ready, and the vaccines are going elsewhere.”

While Henry maintains that CCAP (County Commissioners Association of Pennsylvania) has been helpful to the commissioners in other ways, that has not been the case when it comes to the vaccines. “We never get any news,” Wilbur agreed.

Henry said during the public meeting that the Wyoming County commissioners have been ignored during virtual meetings through which they keep hoping to get answers. “They mute us and won’t let us talk, so we’re going to try to barge in there,” he said on Tuesday, prior to another scheduled meeting with CCAP that afternoon. On Wednesday, he lamented that their attempts were again unsuccessful. “They didn’t let us speak,” Henry related. “It was a big let down.”

With a game plan in hand, at least two sites available for the clinic, and a list of ready volunteers, the commissioners insist that they could conduct a clinic within 48 hours of getting notice that enough doses are on the way. At best, Henry suggested this morning, that will late March or April.

In the meantime, the commissioners office has been fielding at least 30 calls a day about vaccinations despite not being able to speed up the process. Wilbur encouraged senior citizens who have not yet received the shots to call the Area Agency on Aging at 570-822-1158 to be entered into a database. The Agency has been trying to get appointments for eligible persons as vaccines become available and will likely notify those waiting when the county gets a green light for its mass vaccination clinic.

There are currently two COVID relief programs designed to provide financial assistance to owners of bars, restaurants, and hotels. The first one announced is the COVID-19 Hospitality Industry Recovery Program (CHIRP), which is being handled regionally by the Northern Tier Regional Planning & Development Commission. Grant amounts range from $5,000 to $25,000 for businesses with less than 300 employees. Interested readers can log on to www.northerntier.org to see program requirements and download an application.

The Restaurant Revitalization Fund Grant, a new federal program, is also for restaurants and taverns and will be administered by the Small Business Association. Applications are not yet available, but potential recipients need to acquire both a DUNs number through Dun & Bradstreet and a SAMS number to deal directly with the federal government. Both are free, but the SAMS application can take up to two weeks to be processed, so Wilbur suggested that business owners take care of that as soon as possible. Both links are on the front page of the county’s website: www.wycopa.org.

Marie Nicholoff of Tunkhannock joined Tuesday’s meeting via Zoom to ask the commissioners if they would consider hosting a Yellow Heart Memorial service. Nicholoff lost her partner, Donald Sartor, Jr. to COVID last April and noted that his was the first confirmed coronavirus case and death in Wyoming County.

The national organization behind the Yellow Heart Memorials is called Marked By COVID. Nicholoff told the commissioners that she had been to well-attended events staged in both Lackawanna and Luzerne counties and felt that it was time to acknowledge the deaths that have occurred closer to home.

The commissioners expressed an interest to work with Nicholoff to organize an event. “We could work together,” commissioner Henry stated. “As long as we do it in a safe manner, we would allow that to happen.”

Commissioner Wilbur suggested that the easing of restrictions on the size of gatherings by Gov. Tom Wolf on April 4 would provide a better idea of whether or not the courthouse lawn would be large enough to accommodate such an event. If not, the commissioners agreed, another property owned by the county may be more suitable.

One more agenda item related to the pandemic was a reminder to the public that $1.7 million has been made available for county residents who rent or own rental properties. The funds can be used to pay for past due rent and/or utilities. “Please apply for it, or we’ll have to give it back,” said Henry. (Read more about it here: http://www.endlessmtnlifestyles.com/emergency-rental-assistance-program-available-in-wyoming-county/?)

Other Matters of Discussions

The commissioners continue to meet with officials in Eaton Township to determine the best way to reopen Roadside Rest Park on Bowmans Creek and Route 29. The tentative one-year plan currently under consideration involves a commitment from the county to maintain ownership and cover

insurance costs while the township takes on the responsibility for maintenance, potentially with assistance from volunteers and people on probation who need to perform community service. A local business owner has suggested the possibility of donating a zero-turn mower for the cause.

“Before we do anything, there will be another public hearing,” Wilbur stated. “One thing we know is that it will be open for fishing this year.” Henry added that the stream had been stocked last week by the Pennsylvania Fish & Boat Commission. Opening day for trout fishing is Saturday, April 3.

Negotiations are underway for the conversion of the courthouse, the Wyoming County Correctional Facility and Emergency Operations Center, and Tunkhannock Schools to natural gas now that installation of gas lines in the borough is complete. The commissioners are hoping to get a better deal by bundling the properties into a single contract.

A meeting of the Luzerne and Wyoming Counties Mental Health and Disability Services board is scheduled for Thursday, March 25. Commissioner Henry said that the virtual meeting will be open to the public and there will likely be a full agenda due to March being National Mental Health Awareness Month. A link to the meeting can be found on the county’s website.

The hiring of Benjamin Hall of Tunkhannock as a 911 dispatcher was approved after Hall completed his dispatcher training. He began working on March 14. “We think he will be a great asset to the department,” Henry remarked.