DCNR forest rangers Adam Geer (above, left) and Amy Sterner (right) and Worlds End State Park manager Bill Kocher (center) were among the keynote speakers for a virtual annual meeting of the Endless Mountains Heritage Region. They spoke of the challenges created by record crowds seeking outdoor recreation in Sullivan County this year.

The annual meeting of the Endless Mountains Heritage Region (EMHR) provided opportunities for partner organizations and grant recipients to update participants on a variety of projects in Bradford, Susquehanna and Wyoming counties. State park and forest managers from Sullivan County were also on hand to detail the challenges they have faced handling an overwhelming number of visitors due to the COVID pandemic.

EMHR executive director Cain Chamberlin hosted the virtual meeting, recapping a year of postponements and cancellations, as well as hope for an increasing number of outdoor events and fundraisers next year like the EMHR’s participation in a history hike at the Dennis Farm in Susquehanna County in September and a Fall Heritage Paddle on the Susquehanna River in Bradford County on Oct. 10.

The success of those events, which naturally lend themselves to safe distancing, Chamberlin remarked, gives him confidence that the Sullivan County Hikes & Bikes series originally planned for this year can be held in 2021. There has been an increased interest in outdoor recreation in the area since the pandemic began in March, which has helped local economies while also putting stress on the region’s parks and trails systems.

Special guests included Worlds End State Park manager Bill Kocher and DCNR forest rangers Amy Sterner, Adam Geer, and Charles Zeigler, who help manage the Loyalsock Forest where it straddles the Sullivan and Lycoming county line. State lands in the area were shut down on March 17 but quietly reopened while parks and forests in southern parts of Pennsylvania remained closed.

“It was a hot summer. Anywhere there was water, people wanted to come,” Sterner related. “They Googled and found us. We had to be very cautious because of COVID, but there were a lot of people we had to be in contact with.”

As of the end of September, camping permits for Worlds End State Park alone stood at a record 1,135. When the park reached capacity, visitors moved down the valley, where some camped illegally. “It’s been a crazy year to say the least. Overcrowding and overuse has been incredible,” said Kocher. “We are seeing an astronomical amount of people in places where we don’t usually see them.”

Usually quiet Rock Run in the Loyalsock Forest was targeted by hundreds of people per day looking to cool off in one of three popular swimming holes in a two-mile stretch of the creek. Narrow roads leading to the sites quickly became clogged with traffic, Gere remarked, with as many as 125 vehicles where there is barely room for 40.

“With so much traffic, that was an unsafe situation,” said Geer. “Fortunately, we did not have an accident in the swimming holes. We could not have gotten an ambulance up there.” While many visitors expressed their gratitude for the presence of rangers, those receiving citations sometimes caused crowds to gather. “It became an officer safety issue.”

Lessons were learned, such as implementing a digital data base for more efficient booking of campers at the parks. Sterner hopes that an assessment of this year’s problems will result in changes at Rock Run like additional signage. “Next year, if the weather’s nice, we could see the same thing,” she stated. “They’ve found us now, and I think they’ll be back. That’s great, but we need to find a way to deal with the challenges.”

Susquehanna County commissioner Judy Hershel asked how the enormous influx of out-of-staters impacted the local economy. Endless Mountains Visitors Bureau executive director Jean Ruhf replied that hotel and bed & breakfast bookings in the region have been consistently high and that she is refilling area information kiosks with visitor brochures at a rate three times higher than usual.

Attracting folks from near and far was also on the minds of mini-grant project representatives like Lynn Conrad of PA Rail-Trails. With the help of DCNR funding facilitated by the EMHR, significant improvements have been made to the Endless Mountains Trail from Montrose in Susquehanna County to Alford and the 38-mile D&H trail from Carbondale to the New York border. Conrad cited numerous organizations for their collaboration on drainage, erosion and signage improvements.

Keystone College liaison Marina Martino related that production of new trail education and interpretive signage there has been stalled by kinks in the supply chain. But she expects installation of signs addressing the riparian zone, Nokomis Creek, and the historic suspension bridge on the back woodlands campus to be completed by summer of 2021. Seven miles of hiking and biking trails, including 1.7 miles of the Trolley Trail are on the Wyoming County side of campus at Factoryville.

Matt Carl, Bradford County Historical Society manager and curator, expressed his gratitude to the EMHR for funding for the replacement of a 20-year-old heating and cooling system at the former prison building in Towanda that serves as a museum. Replacement of the unit will save the Society money and be more fuel efficient. Another EMHR grant will speed up the renovations on a former Victorian hotel in LeRoy to serve as a new Heritage Museum in the village. 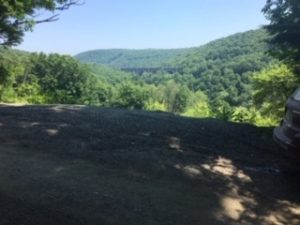 Collaboration from the EMHR and others has also been the key to fast-tracking the Martin’s Creek Viaduct Overlook project by the Brooklyn Township Historical Society. According to David Palmer, Society family history trustee, everyone from the property owner and township officials to local businesses have been on board with the endeavor. Also known as the Kingsley Bridge, the structure is considered the little sister of the Tunkhannock Creek Viaduct. “Though she is a bit smaller, she was finished earlier in 1914,” Palmer remarked. 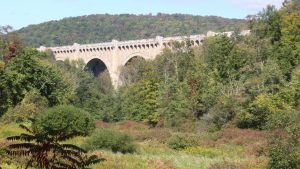 Other presenters on Oct. 9 included Josh Stull of the Nicholson Heritage Association and train station museum project, Erica Rogler of the Dietrich Theater and the Wyoming County history mural project, and Darryl Gore of the Historic Dennis Farm. Project partners who could not participate provided briefings read by Chamberlin.

Chamberlin offered an overview of achievements by the EMHR in 2020, including increased membership; enhanced internet and social media presence; updated Heritage Attract Signs to be erected in honor of Bradford County commissioner and EMHR board member Ed Bustin, who died in April; and the successful implementation of the Route 6 Façade project in cooperation with the PA Route 6 Alliance.

Chamberlin also made a plea to community and organization leaders in Sullivan County to apply for grants through the EMHR next year. “We definitely want to get some more projects going in Sullivan County,” he stated. Interested readers can log on to www.EMHeritage.org for more information.

“So many amazing projects happening,” commissioner Hershel exclaimed in her parting remarks to the virtual attendees. “Together, we will get through this crazy time, and we will certainly be better for it on the other side.”