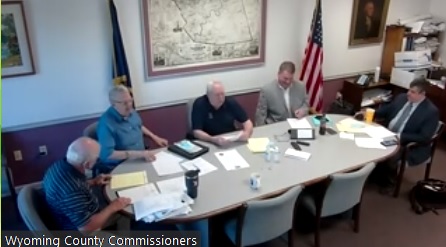 Due to plans by Gov. Tom Wolf to lift most COVID-related restrictions after Memorial Day weekend, the Wyoming County commissioners agreed this morning to re-open the courthouse at Tunkhannock and other county offices. The only exceptions mentioned during the May 11 public meeting were the continuing need for appointments with the Prothonotary Office for passports and the Sheriff’s Office for gun permits because both require more time.

Nonetheless, commissioner chair Rick Wilbur related, residents are encouraged to use online services or call with questions whenever possible to keep foot traffic at the courthouse at a minimum. Masks are still required, and anybody who cannot wear a mask due to health issues will be accommodated in the gazebo on the courthouse lawn. If the number of positive cases in the county begins to climb again, the commissioners may decide to reverse course.

The board also addressed a request by the County Planning Commission to resume in-person meetings at the Wyoming County Emergency Management Center. The commissioners had no objections, noting that the meeting room provides ample room for safe- distancing, as long as EMA officials are on board with the change.

Three projects will be funded by a PCoRP grant of about $20,600. The commissioners agreed to spend $13,650 to install cameras in vehicles used by the Sheriff’s Department, $4,723 to repair leaks in the fire suppression sprinkler system in the courthouse, and $2,274 for new cameras in the Wyoming County Correctional Facility.

There are currently no cameras in the sheriff’s cars, commissioner Tom Henry noted. If there were to be a problem during the transport of a prisoner or other person, there could be liability issues.

The commissioners are learning more about the potential for establishing a regional or countywide position to assist strained local volunteer first response units. Fire companies and other EMS are literally in crisis mode in the face of dwindling volunteerism. “It’s in its infancy, and we are looking for funding,” Wilbur explained. “But we’re excited that something like that could happen.”

Another agenda item dealing with safety issues involved upcoming evacuation drills for the courthouse and other county buildings. “This will help us with our insurance costs, and we will have much better-informed employees in case anything were to happen,” Wilbur stated.

Changes in the Restaurant Revitalization grant program have made it easier for those in the food service industry to recover losses incurred over the past year. Initially, program requirements included applying for DUNs and SAMs numbers from the state and federal government. According to Wilbur, grant program administrators determined that the process was cumbersome and unnecessary. That still may have deterred some restaurant owners from applying, he suggested. The program opened last Monday, and few applications have been submitted. “They thought it was going to go very quickly, but there are still openings,” Wilbur remarked. Several people that he knows who have applied for the funds told him it was one of the easiest applications they have ever filled out and that they have already received grants totaling $20,000 to $25,000. The money can be used to cover a variety of expenses, including catching up on payroll and utilities, and is based solely on difference in revenue from last year to this year.

The Rent and Utilities Assistance Program is still open for renters and landlords. Interested readers can log on to www.compass.state.pa.gov for an application.

The deadline to apply for the The Hospitality Grants program is Friday, May 14. Only about 15 tavern and restaurant owners have applied for more than $300,000 in funds that are available. The money will be divided among eligible applicants once the deadline is passed. An online application can be found at the county website, www.wycopa.org.

The commissioners were among elected officials to meet with Lackawanna College administrators at the new campus under construction in the former Thomas’s grocery store in the Tioga West Plaza.

Commissioner Ernie King said that he was excited about the potential for local residents to earn degrees in trades education with hands-on learning experiences, especially at the college’s School of Petroleum & Natural Gas, which is in the process of moving from New Milford in Susquehanna County.

Commissioner Wilbur noted that the Tunkhannock Center will offer much more than natural gas courses. Local residents will be able to start a number of Bachelor degree programs at the school, including business, cyber security and criminal justice. Commissioner Henry likes the idea that people can continue to work locally while attending school.

Other Matters of Interest

Commissioner King and EMA director Gene Dziak responded to a complaint from a North Branch Township resident about noise emanating from a natural gas compressor station recently brought on line there, using monitors that the county purchased several years ago specifically for that purpose.

“In this particular case, the noise was well below the state requirement, so we couldn’t take any further action on it,” King stated. “We also have a monitor for air quality, which was also below allowable levels.”

The next meeting concerning the reopening of the Roadside Rest Park in Eaton Township is slated for Tuesday, May 25.

On the topic of COVID vaccinations, King reported that more than 72 percent of county residents over the age of 65 have been vaccinated against the coronavirus. Plans are under development for vaccinations at the county jail and public schools now that the Pfizer vaccine has received emergency approval for 12 to 16-year-old youths.

“I wish people would go out and do it,” Henry said of ongoing vaccine hesitancy. “The quicker we can get to 70 percent, the quicker that we can start getting things back to normal.

King recalled that vaccines for polio, smallpox, German measles helped to eradicate them and other “childhood” diseases. “How many people do you know who have had polio or smallpox?” he asked, answering, “None. That’s because they took the vaccine.”

The Wall That Heels, a mobile replica of the Veterans Memorial Wall, will be arriving today in Tunkhannock around 4 pm for set up at the Tunkhannock Schools sports stadium. Trailers containing the wall pieces will be escorted to the field by a detachment of first responders and other individuals. The exhibit will be open to the public from 12 am May 13 to 2 pm on May 16, with volunteer training scheduled for May 12. The commissioners will participate in an opening ceremony event at 6 pm on Thursday. State Rep. Karen Boback and U.S. Senator Pat Toomey will host a Vietnam veterans pinning ceremony at 6 pm on Friday evening. Boback, participating in today’s meeting via Zoom, said that eligible veterans (or their family members) can contact her office to register for the event.

A Memorial Day service planned at courthouse gazebo on Monday, May 31 at 10 am.