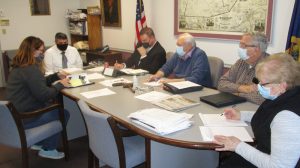 A National Guard cyber security unit recently spent a week in Wyoming County testing the county’s internet for potential breaches. While some deficiencies were found, the county commissioners revealed in a public meeting on Wednesday that the overall review went well. The commissioners commended IT specialist Brian Dudick for a job well-done as the county’s sole IT employee.

“We’re way further ahead than we thought we were,” said commissioner chair Rick Wilbur. “They told us that there are other counties with bigger staffs that have more problems.” He credited commissioner Ernie King for applying for the security audit six months ago.

“In effect, they ‘attack’ our system and list any vulnerabilities they find,” commissioner Tom Henry explained. The waiting list for the free service is long, but a cancellation provided an opportunity for the unit to visit Wyoming County earlier than expected. The report filed with the county details the deficiencies and provides recommendations for fixing them. “They give us a chance to repair, replace and patch, and then they will come back to test it again,” Henry added.

Upgrades, including an improved back-up system, will cost about $30,000, which will be paid for from either Act 13 money or federal COVID funds, both of which can be used to address safety issues. Concerns about a possible cyber attack were heightened after Luzerne County officials had to pay a ransom to attackers last year to regain control of their system.

Due to rise of such incidents across the state, the County Commissioners Association of Pennsylvania (CCAP) has begun to offer insurance policies to cover ransoms, King explained, but it is in the best interest of every county to invest in software and programs that protect files against ransomware. If a county has not followed the National Guard’s cyber security instructions fully, such a policy can be denied.

County planner Lynnelle Farber brought four recreational projects to the table that had been submitted for Marcellus Legacy Fund mini grants. The funding stream falls under the Public Utility Commission’s Act 13 program and is geared specifically to new recreational projects, enhancements, and upkeep. The county has made up to $50,000 available every two to three years for grants of $5,000 each. “This is some money that we can have some fun with,” Henry remarked.

Eligible projects this year include playground upgrades at the park in Washington Township; a safety fence and other improvements to George Hock Park in Exeter Township; increased trail access and a butterfly garden at the park in Overfield Township, as well as a historical plaque for the former carousel pad there; and a new mower for maintaining Lazybrook Park in Tunkhannock Township. Maintenance of parks continues to be one of the most common needs, Farber related.

With the total for the four approved projects coming in under $20,000, the commissioners had announced at a previous meeting that they would extend the deadline to Jan. 15, 2022 in hopes of making the remaining $30,000+ available for other eligible projects. But they felt that the municipalities that had submitted applications by the first deadline deserved to have their money as soon as possible.

The union representing county employees voted to extend their contracts one more year. Each employee will get a 25 cent per hour raise, as well as $2,000 hazard pay bonuses that will be distributed in $1,000 allotments in January and July of 2022. The extra money will come from the federal COVID funding. Prison employees, who vote separately, were given the same offer but have not yet approved their contract. New contract negotiations for both will begin in February or March.

Other Matters of Interests

Additional items covered by the commissioners included the 2022 budget, which will be posted next month and will contain no tax increase, commissioner Wilbur promised. “We have some rainy day funds that we can use before we have to do that,” he noted.

The county’s pension fund is not only holding steady since it was reinvested, it made money this year, according to the commissioners. The increase in its value does not include what employees added to it.

In the coming weeks, the commissioners will be meeting with the Carpenters Union about educational and job opportunities for local students and, perhaps, inmates needing a vocation upon their releases from jail.

“I have a particular interest in this since the Tunkhannock School District discontinued their building trades and agriculture programs,” King stated. The initiative is a multi-county effort, and the meetings will be held at the Susquehanna County Career & Technology Center. “This could be good for a number of different populations.”

There was no quorum for a prison board meeting, so commissioner Henry provided stats to the media from the monthly prison report filed by warden Ken Repsher. Repsher and Lt. Heather Schmidt checked in briefly by phone and skype. There were six more intakes than releases last month, bringing the total number of inmates currently in the system to 61. Three men and four women are currently boarded in prisons outside the county either for drug and alcohol treatment or because they can’t be held in the same facility.

The Wyoming County Courthouse will be closed Thursday and Friday, Nov. 25 and 26, in observance of the Thanksgiving Holiday.