Trying to make sense of the unknowns of the prolonged COVID-19 pandemic continues to be a priority for the Wyoming County Commissioners, who will be distributing more than $2-million in relief funds to struggling businesses within a few weeks. Looking forward, the commissioners are working with the Northern Tier Regional Planning and Development Commission (NTRPDC) and the Sullivan County commissioners to find ways to revitalize their respective Industrial Development Authorities (IDAs).

As of Aug. 28, more than 180 applications had been received at the Wyoming County Commissioners Office for COVID Relief Block Grants. The county was allocated $2.4-million to assist small business owners who had suffered extensive revenue losses due to coronavirus-related shutdowns and the ensuing recession.

At their regular public meeting held at the courthouse in Tunkhannock this morning, commissioner chair Rick Wilbur suggested that requests for funds are likely four times that which is available. He and fellow commissioners Tom Henry and Ernie King will immediately begin the task of confirming that applicants are eligible and then develop a formula by which the funds can be appropriated.

Among the nonprofit organizations that applied for grant money is the Wyoming County Community Alliance (WCCA), represented by board members, Gina Suydam, who was in attendance, and Deb Shurtleff who participated virtually. The WCCA has an interest in rehabilitating the former Church of Latter Day Saints into a community center to address three key needs of local residents. Suydam petitioned the commissioners for $15,000 in COVID-Cares funding to help offset start-up costs. She does expect approval by the PA DCED for Neighborhood Assistance Grant Program funding in December. 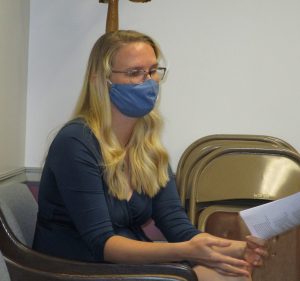 “But we think that’s kind of too late,” Suydam (above) explained. The needs for food security, remote school internet access for students, and social space for senior citizens are immediate, she maintained.

Commissioner Wilbur said that he was in support of the WCCA’s application but suggested he’d like to see some language in the proposal that specifies that the funds are needed for COVID-related expenses that the board members expect to incur prior to Dec. 1.

In the meantime, Suydam noted, the WCCA has also appealed to local businesses to support their efforts. Neighborhood Assistance Grants will lead to tax credits for businesses making charitable contributions.

Need for a Stronger IDA Discussed

The commissioners are renewing their efforts to recreate the county’s Industrial Development Authority, which has been resurrected in the past for special purposes before it quietly dissolves again.

The last time the IDA was brought together was in 2017 to help the county and the Wyoming County Chamber of Commerce (WyCCC) leverage grants for natural gas infrastructure. It was formed in 1971 to help coordinate the construction of a new road to the Procter & Gamble in Mehoopany. When the organization ran out of big projects, it sunk into oblivion. The Wyoming County IDA was incorporated as a 50-year organization, commissioner King explained, so now is the time to restructure it.

“We want to make it very proactive,” King remarked. “And no longer just reactive.”

WyCCC president Suydam suggested that, without an IDA, the county misses out on investment opportunities from businesses looking for new locations. Presently, if the state reaches out to the Chamber for a referral, there is a two to three day reaction time while she consults real estate agents to inquire about available properties.

An active IDA would likely have real estate agents among its board members, the commissioners suggested, who would help the IDA establish an inventory of potential investment sites. The bidding process between counties and states is very competitive, King remarked, so the county needs to be prepared.

The commissioners recently met with the NTRPDC and the Sullivan County commissioners to share ideas and establish a partnership. Both counties would maintain individual IDAs, Wilbur noted. “If something comes through to us that the synergy is more Sullivan County, we would steer it to them and vice versa,” he stated. “I think that helping each other regionally is a good thing.”

In the meantime, the commissioners are soliciting new board members and considering expanding the board size from its current five members to provide more diversity of interests and expertise. “We’ll be changing the complexion of the board,” said King.

No Support from Commissioners for Governor’s Request

Commissioner Wilbur reported that Gov. Top Wolf has asked for legislation to grant additional sick days and family leave time off beyond existing contract language. The proposal is meant to provide more help for families dealing with the coronavirus pandemic, but it would prove costly to the county.

“We’re not against it. We think it would be a wonderful thing,” Wilbur maintained. “We can’t afford though. If they can afford it, we’re all for it.”

No Move for Mehoopany Voters

A confusing matter of late concerning a possible relocation of the Mehoopany election poll from the firehouse on Route 87 to the Mehoopany Township building was settled indirectly by federal law. It was never quite clear where a petition came from calling for the move, but township officials were quick to tell the commissioners more than a month ago that voters would be much better accommodated at the roomier firehouse, which also has adequate parking.

When the matter returned to the agenda a few weeks later, the commissioners tabled it and further investigated the situation. They were bemused by the fact that many petition signers listed their addresses as Factoryville, Tunkhannock and even locales outside the county.

As it turns out, the part of the township building that would be used for voters is not ADA compliant. The commissioners convened an already advertised meeting of the County Election Board after the public meeting and unanimously agreed to keep Mehoopany voters at their firehouse.