At just under and hour long, Tuesday morning’s public meeting of the Wyoming County Commissioners touched on dozens of topics under progress and hinted at many more that the board was not ready to disclose. Among the agenda items were meetings at Elk Lake School with the Regional Council of Carpenters that would provide carpenters apprentice certificates to students completing a new program, satisfaction that the Bridgeview housing project is back on track, and a better understanding of upgrades in the county’s contract with EagleView, which provides aerial imagery to the county for a variety of uses.

“The Carpenters Apprentice Union has a very extensive program that they want to bring to the area,” King related. “If the school districts agree to the program, graduates can immediately become carpenters’ apprentices.”

The curriculum is part of the Union’s Career Connections program and includes hands-on training and a rigorous practical math program, as well as metal working. King described the math text book as being very thick and geared toward providing math that students can apply to many jobs and trades after graduation. “Some schools have adopted just the math program because it is that good,” he added.

The commissioners have been working with a number of local learning institutes to provide more opportunities for local students and young adults to pursue trades careers for which there is currently a much higher demand than for jobs that require a four-year college degree.

“We need to be acknowledging high school students for their vocational abilities and not just their educational plans,” King remarked.

Commissioner Rick Wilbur agreed that the time has come for leveling out the way schools and parents approach continuing education in a new, industrial economy. “There’s a big push to get kids into technical jobs,” Wilbur remarked. “Some graduate with twice the pay and no debt. And that’s a good thing.”

Engineers can begin their work, and ground should be broken by April to begin construction of 12 new housing units in Nicholson that will be called Bridgeview. The commissioners announced that all funding has been secured and approved, and Trehab, led by Dennis Phelps, will oversee the project, rather than the Wyoming County Housing & Redevelopment Authority.

“The biggest change is that these units – two with two bedrooms and 10 with one bedroom – will be available for both low- and moderate-income residents,” Wilbur related.

In 2019, Wyoming County entered a contract with EagleView to provide geospatial software, aerial imagery and analytics. The aerial photos and programs that break them down for a variety of uses have become an important tool for many departments in the county, including tax assessment, planning, and law enforcement.

At the onset of the pandemic, EagleView was forced to cease its operations, leaving contracts across the country in limbo. “They had to visit every governor to be listed as ‘essential,’” GIS/Mapping coordinator Chas Mead explained.

While the company waited for an eventual change in status, they offered many of their clients one free high-resolution flyover during the summer of 2020. Mead declined the offer because trees full of leaves occlude the detailed imagery that late fall and early spring photos provide. Mead asked instead for a free fall flyover, which EagleView performed in October 2020. They did another contracted flyover in the spring of 2021 and delivered the final product in June 2021.

Other advances in aerial imagery allowed for taking photos from four different directions, usually at a 40- or 50-degree angle. The process is called oblique imagery and produces mosaics that allow users to view a property from all sides and above. The mosaics can be especially useful to law enforcement agencies serving warrants or conducting other activity where knowing all ways in and out of a property, as well as where dogs may be kept, dramatically increases safety.

Whereas the county had previously contracted for 9-inch resolution for most of the countryside and 4-inch resolution photos for the five boroughs plus Lake Winola and Lake Carey, the new package offers a 3-inch resolution recording of the entire county. He used before and after photos of Meshoppen Stone in Meshoppen Township as an example. While one was able to see that their were vehicles in the parking lot around the main buildings in the 2019 photos, the new images show details as small as windows and items in the backs of trucks.

At the same time, Mead was able to refinance the contract for the payments to be spread out over six years, which he maintained will save the county a considerable amount of money. The service is paid for from Act 13 (Impact fee) funding, which can be used for most public safety projects.

“It has more than paid for itself,” commissioner Tom Henry stated. “It has really helped our assessment department with taxes.”

“These are the kinds of things that we like to spend Act 13 funds on,” Wilbur added.

As the commissioners seek to replace a retiring Gene Dziak at the county EMA center, they have been meeting with PEMA officials to make sure they understand what portion of an EMA director’s salaries the agency covers. As Dziak has been at the helm of the EMA longer than any of the current board members have been commissioner, Henry said, “We want to make sure we have that down before we offer the job to someone new.” Longtime EMA employee Dave Carichner is handling most of the director’s duties, though Dziak has been working one day a week and is “on-call” to help with urgent situations.

William Earnshaw was reappointed to the Wyoming County Airport Authority Board where he has most recently served as treasurer. It is now up to the Authority to appoint its own officers from the approved board members, Wilbur explained.

Instructions for the use of funding available to counties form the third part of the American Rescue Plan (ARP) have been simplified to the point that the commissioners feel confident moving forward with a number of projects that they have had under consideration. The biggest change, Wilbur offered, is that a formula that assumed a 4-percent growth in revenue while some counties are still reporting losses has been modified. “That gives us a lot more flexibility,” he stated. “What they did was set a cap of $10 million. Anything under that is considered a loss and is eligible.” The money cannot be spent on pension plans, lump payoffs of debt, nor the creation of “rainy day” funds. 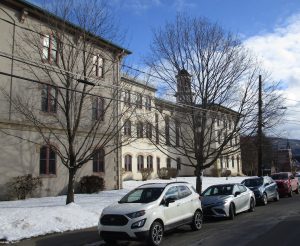