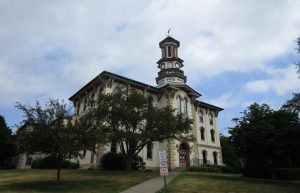 At the start of Tuesday’s regular public meeting of the Wyoming County Commissioners, chairman Rick Wilbur announced, “It’s an exciting meeting. We have a lot going on.”

After laying out basic details of a number of new programs to provide financial assistance for those adversely affected by the COVID-19 pandemic, reporting on a growing and stable “rainy day” Act 13 fund, and expressing relief that the state has backed off from a budgeting plan that would have greatly reduced funding for county 911 services, Wilbur remarked, “That’s some good news to give to people after all the gloom and doom.”

Nonetheless, the county continues to operate in the “green phase” under PA Dept. of Health guidelines which limits public access to the courthouse while employees are providing almost all of the services they did before. Residents requiring services are still asked to call the respective department and make an appointment. Security guards continue to take temperatures of all employees and visitors. Small meetings have been held outside the courthouse in the gazebo. June 23 marked the first day since March that the media had been permitted to participate in person at the commissioners meeting.

“Things are working the way that they are supposed to,” commissioner Tom Henry related.

“There have been no complaints,” commissioner Ernie King added.

911 Back on Solid Footing

The commissioners learned from 911 director Jeff Porter on June 18 that enough votes had been achieved to prevent the state from changing the formula by which 911 centers are funded. Initially, it appeared that Wyoming County would be the biggest loser.

The commissioners credited Porter for leading the charge to provide all of the information needed for Rep. Karen Boback and Sen. Lisa Baker to take their case to Harrisburg and get the decision overturned. According to Wilbur, should the 911 Advisory Committee even try to resurrect the plan, it will be two to three years down the road.

Though Wyoming County’s Share of Act 13 funding dropped by $250,000 this year, a total of $1,071,042 is on the way to be added to more than $942,000 already in reserves from previous Act 13 and Marcellus Legacy Fund distributions. Legacy Funds are drawn down every few years in the form of mini grants to non-profits for recreational enhancements. But the 1.9-million the county will hold in the primary account will stay there for a while.

“We’re very frugal on what we have, and we want to keep it that way,” Wilbur said of his sentiments that the money only be used only for emergencies and to keep property taxes down.

Though the agenda was indeed ambitious, the commissioners were most excited about new grants and other financial assistance being offered through the state and regional agencies to help offset the financial impacts of the pandemic. In addition to being posted at www.wycopa.org as they are finalized, details of the programs will be released via advertisements in local media.

Coordinated in partnership with the Wyoming County Chamber of Commerce, they include funds available to small businesses, non-profit organizations, municipalities and renters in Wyoming County.

Among them is a COVID-19 County Relief Block Grant of $2.4 million to assist owners of businesses with less than 100 employees, $170 million in CDBG funding for primarily redevelopment or blight areas of the county, $100-million in state funding for businesses employing less that 25 people, and a rent relief program conducted by C.E.O. and Wyoming County Human Services. Trehab will administer the state Small Business Support Grants and the CDBG applications. Wilbur offered contact information for the County Relief Block Grant, noting that the commissioners office expects to be overwhelmed.

“This is very interesting. We’ve never had this amount of money available to us,” Henry remarked.

Directors of non-profits, tourism business managers, municipal officials, and small business owners are asked to direct their questions about the application process to WeCARE@wycopa.org or 570-996-2273 or 996-2227. “We will all be taking the calls and answering the emails,” said Wilbur, who asked that people try to contact them between 10 am and noon each day. He also encouraged business owners to take advantage of ongoing programming offered by the Chamber at www.wyccc.org.

After fielding calls complaining of activities at Roadside Rest in Eaton Township, commissioner Henry visited the once popular family gathering place to find numerous out-of-state residents having a party with loud music and a campfire, all of which are prohibited since the park’s closure by the county. The park had recently been opened for fishing only and was to be monitored by the PA Fish & Boat Commission (read about it here: http://www.endlessmtnlifestyles.com/?p=16029 ).

Henry related that he asked the people there to leave and then locked the gate, effectively closing the park to everyone. Though he dislikes the idea that local people who were not breaking the rules cannot go there, he said, “Until we figure out where we are with it, it will remain closed.”

So, When Will the Courthouse Reopen?

Looking at southern states, where municipalities are back off of reopening plans or shutting back down elements of their economies because of a resurgence of COVID cases, and an upcoming weekend of holiday, the commissioners hinted that they are satisfied with the current pace of reopening at county buildings and remain cautious about easing any more precautions too quickly.

Wilbur expressed concerns about people traveling in and out of the area for the July 4th holiday and especially those vacationing in “hot spots” where COVID numbers are again on the rise. Owing to the evidence that the virus generally manifests itself in two weeks, Wilbur said the commissioners would reassess their options two weeks after July 4.

While conceding that any plans are still in the talking stages, he stated, “After that, I’m going to vote that we open up completely.”