In: career opportunities
With: 0 Comments 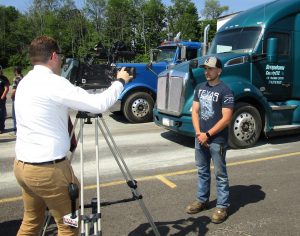 CDL Training Center students (top) who directly benefited from the recent donation by Cabot of $30,000 in EITC funds, as well as another $10,000 in scholarships, were among those to mark the receipt of the check to the Susquehanna County Career & Technology Center on June 18. CDL student Steve Bognatz (above) had an opportunity to share plans for his future as a truck driver with local television viewers. SCCTC CDL Program | Eyewitness News (pahomepage.com)

Eight students currently enrolled at the CDL Training Center at Susquehanna County Career & Technology Center (SCCTC) are excited to know that there are more than enough driving jobs available to them as soon as they graduate. GasSearch Drilling Services, Cabot Oil & Gas Corporation’s water transport subsidiary, has 50 openings alone between their Montrose and Lenox locations.

That was the word from GDS operations manager Chad Gorman who, along with night shift trucking foreman Bob Bennie visited the school recently to talk about the possibilities their CDL certifications will bring their way.

“It’s an exciting opportunity for you,” Bennie told the students, who ranged in age from 18 to 38. “You come out of here ready to run a truck. We’ll train you how to run the tank.”

Gorman and Bennie went through the impressive list of benefits offered at GDS, including paid training, night shift differential, paid holidays and sick days, and a six percent match for their 401K retirement plans. GDS has enjoyed a high success rate at hiring students directly from the CDL school (https://susqcdl.com/). However, Gorman related that GDS is not the only outfit in town and encouraged the students to look into other companies who need drivers just as badly. “We’re all working together,” he remarked.

Cabot’s external affairs director George Stark and external affairs manager Bill desRosiers also spoke to the students. Stark told them to take a look at the nice employee pickup trucks parked in the GDS lot. “If you want an idea of how well these drivers are doing, that’s a prime example,” he stated.

“I’m a big proponent for people getting their CDL just as a resume booster,” desRosiers added, “even if you never drive a truck.”

The students were provided information and applications before they stepped outside on a stellar summer day for the presentation of a $40,000 check from Cabot to SCCTC to provide scholarships for CDL students. Using EITC credits, Cabot was able to cover tuition costs for five high school seniors who were also graduating from their respective schools this year. An additional $10,000 will go towards $500 scholarships for the older students. 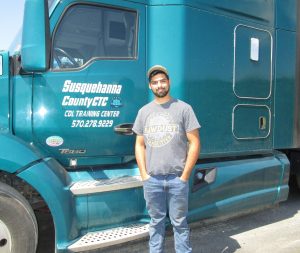 “It helps a lot, actually,” said Gavin Baker, a senior at Susquehanna High School. “I didn’t have to pay a single penny out of pocket.” Gavin has been passing the busy GDS facility in Lenox over the past year and couldn’t help thinking that a career as a water hauler might be right for him. “I can make a good living and sleep in my own bed,” he stated.

“It’s unbelievable how many jobs there are. You can go anywhere with it,” said Steven Bognatz from Tunkhannock. “I worked around trucks for a couple of years, and I decided to get my CDL and get behind the wheel of a truck.”

“It’s 15 years in the making, and I’m finally here,” Jennifer Pfahl of Tunkhannock remarked. She is excited about starting life over at 38 and pursuing a job by which she can support her family. Jennifer was twice talked out of trucking by family members and credits her enrollment at SCCTC to Trehab’s Workforce Program. She also likes the idea of over-the-road trucking as a way to show her 11-year-old son the country.

As the pandemic eases, SCCTC director Alice Davis is excited to see enrollment on the rise again. “The numbers are coming up with the end of COVID, and the gas industry is growing again,” she stated. And the EITC funds, she noted, help students across the school’s entire curriculum.