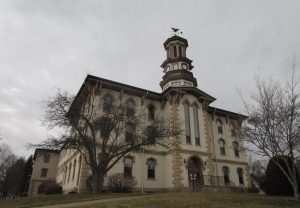 The morning skies hanging over the Wyoming County Courthouse were a bit gloomy on Tuesday, but there was a lot going on inside, including a public meeting of the Wyoming County Commissioners, conducted by (top, from left) solicitor Paul Litwin III, commissioners Tom Henry, Rick Wilbur, and Ernie King and deputy chief clerk Georgette Smith.

Management of a housing project near Nicholson that was initiated under the auspices of the Wyoming County Housing & Redevelopment Authority (H&RA) will be turned over to Trehab as soon as the PA Department of Community & Economic Development (DCED) agrees to the changes recommended by the Wyoming County Commissioners.

The project funded by Community Block Development Grants (CBDG) was originally put out for bids in 2016, but construction has lagged far behind expectations. Of the 16 units for low- to moderate-income families in three townhouses on the site of the former Nicholson High School that were planned, only three units have been completed.

Near the end of 2018, commissioner Tom Henry and county EMA director Gene Dziak went to Nicholson to check in on the project and reported that it was “nowhere near completion.” At their year-end meeting, Henry brought up to the board an invoice from H&RA for about one-third the cost of the proposed $1.2-million construction and voiced his concerns that the county might be left on the hook for unfinished work.

“The county’s on the hook for it anyway,” then commissioner Judy Mead lamented.

On Jan. 28 of this year, Henry and new commissioners Ernie King and Rick Wilbur announced that the county was abandoning its original plans for the townhouses and that they were communicating with Trehab executive director Dennis Phelps to perhaps take the project in a new direction. Wilbur cited Trehab as the most qualified agency to bring the debacle into check.

“Our hope is that Trehab can bring a whole new light to it,” Henry concurred. A re-evaluation by Trehab will help determine what can be completed and whether the public would be better served if the units are instead rented as senior citizen apartments. Henry and Wilbur agreed in January that the units would be too expensive for low- to moderate-income persons to purchase.

On a related note, the commissioners confirmed that Lisa Hahn, who had been serving the H&RA as grants administrator through that time period, is no longer associated with the agency.

With obvious regret, the commissioners announced on Tuesday that the Roadside Rest public park along Rt. 29 in Eaton Township will remain closed until further notice. The once popular family picnic area along Bowman’s Creek was closed in 2019 after repeated findings of drug paraphernalia and other questionable refuse, as well as concerns about trespassing by an adjacent property owner.

After a final meeting with Rep. Karen Boback and representatives of PennDOT, it was determined that PennDOT officials no longer had an interest in maintaining the park, as the agency has done since the early 1950s.

“They have let us know that they want to abandon the property,” commissioner Henry said of PennDOT’s bid to be released from an easement granted to them after the county purchased the first 8.1 acres in September 1952 for $1,500. “We decided to close it until we come up with a plan.”

“It’s a shame that it’s come to this,” Wilbur remarked.

Commissioner Ernie King noted that the PA Fish and Boat Commission wants to allow anglers access to Bowmans Creek for some unspecified portions of trout season, which begins Saturday, April 18. They will, in effect, be patrolling the park during those times. Wilbur said that the agency has not offered specifics yet of how often the gates will be open, acknowledging that there is good fishing there through October.

King clarified that only the parking area and the stream will be accessible to trout fishers. Picnic tables will be rendered unusable. Henry said that the county will continue to reassess the possibilities of reopening and that organizations like Patriots Cove had shown interest in the property.

County planner Lynnelle Farber was pleased to announce that 10 municipalities and other entities had successfully submitted applications for the $50,000 in Marcellus Legacy funds that were made available this year. At $5,000 per project allocation, requests for the funds that are geared primarily for work on parks, trails and river access points exactly matched the amount available for the first time.

Recipients included Don Reeves Athletic Field for field restoration and new bleachers, Exeter Township Supervisors to assist with construction of a kayak and canoe ramp, Factoryville Borough to assist with construction of a basketball/pickelball court, George Hock Park Committee for park improvements and elements of the annual Summer Celebration, Laceyville Borough Council for playground equipment and a safety surface, Overfield township Parks Committee for park and trail enhancements, Tunkhannock Primary Center for installation of playground equipment and a safety surface, Tunkhannock Little League for pedestrian safety improvements, and the Wyoming County Cultural Center to fund elements of the annual River Day celebration and some park maintenance.

“There was no competition this year, but maybe next time,” Farber remarked.

“I’m so glad that we gave it all away,” Henry added before the commissioners moved unanimously to approve Farber’s recommendations and release the funds.

The scheduled trial of Phillip Walters took a few more twists and turns this past week, as county officials face the possibility of extended proceedings and a packed courtroom. On Tuesday, the commissioners approved the spending of $6,548 for a new microphone system to be installed in courtroom #1. According to Wilbur, the amount will come from two existing accounts dedicated to courtroom maintenance, including the judge’s discretionary fund.

“This trial is going to cost us a lot of money, and this is just part of it,” Wilbur stated.

It was also reported on Tuesday that president judge Russell Shurtleff has recused himself from the murder trial. Through his attorney, Timothy Michaels, Walters filed suit against the court last week on the grounds that Shurtleff “has a bias in favor of prosecution against the defense.” Shurtleff issued an order on Friday, stating that he would grant the request to “avoid the appearance of impropriety.” The Administrative Office of Pennsylvania Courts must now appoint a replacement judge to oversee the case geared to determine whether or not Walters is guilty of killing Haley Lorenzen in late 2018 and disposing of her body in the Susquehanna River.

Commissioner King attended a grant workshop at the Dietrich Theater hosted by the Endless Mountains Heritage Region last week. According to King, the event was well attended and many resources were discussed for municipalities and non-profit organizations to petition for project funding. “I’d encourage people looking for grants to check the Heritage Region website (www.emheritage.org),” he said.

King and Henry attended a meeting at the Wyoming County EMA Center to discuss severe weather preparedness with representatives from the National Weather Service from Binghamton, NY. “Tom and I were both impressed by the coordination between Binghamton and our com center,” said King, noting that the forecasters at Binghamton, which is considered more strategic for the region than Wilkes-Barre/Scranton, uses data from weather gauges in Wyoming County to shape their forecasts.

King and Wilbur discussed an interest in a company looking to add new transmitters to several of the county’s communication towers to enhance emergency operations. “We’re constantly concerned about areas of the county where service is not up to par,” Wilbur stated.

With national concerned about the coronavirus spreading daily, Wilbur participated in a webinar on the topic sponsored by the County Commissioners Association of Pennsylvania (CCAP) on March 4. “We don’t want people to get too excited,” said Wilbur, while acknowledging that one case had been reported as close as Wayne County. He suggested that people who want up-to-date information log on to https://www.health.pa.gov/topics/disease/Pages/Coronavirus.aspx.

The commissioners are seeking a local webmaster to give the county’s website a new look now that CCAP is no longer helping to cover the cost of website design.

The Wyoming County Special Needs Association will hold its annual Celebration of Abilities on Tuesday, March 31 at Shadowbrook Resort. A hot breakfast is included this year at a cost of $10 per guest. Interested readers should call the agency at 570-996-6222 to make reservations.