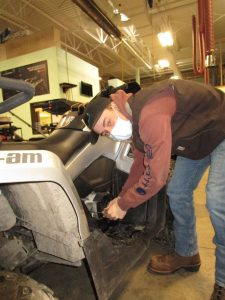 At the very core of trades education is hands-on learning. Not only can it help a student move more directly into the workforce, it is a form of salvation for some students who do not perform as well in a traditional classroom setting. The COVID pandemic has no respect for traditions and has challenged administrators and educators at the Susquehanna County Career & Technology Center (SCCTC) to forge a “new normal” when they can and “go with the flow” when they can’t.

The most common denominator in this rapidly evolving situation is that the seven school districts in Susquehanna, Wyoming and Lackawanna counties whose students are enrolled at SCCTC have their own criteria as to whether students are in-house, virtually learning at home, or juggling a combination of the two. Some districts also kept students at home for virtual learning for two weeks after the Christmas holiday in the event that family gatherings led to outbreaks or a spike in positive cases.

“It’s a challenge. We listen to every school district because they are all different,” said SCCTC executive director Dr. Alice Davis. “It can change from moment to moment.” As difficult as that can be for those in any one school district, figuring out how to simultaneously deal with seven competing game plans falls on SCCTC’s individual instructors.

“Maintaining that continuity has been difficult. Students come in, get into a project, then they are gone for two weeks and need to catch up,” small engines technologies instructor Dan Zabrowski related. “They are trying the best that they can.”

“Even if they don’t show up, they get virtual education for the day,” Davis explained. “So, when the kids are here, we can concentrate on the hands-on learning to work on their competencies.”

For the most part, emerging technologies have become the safety net that has kept most schools and businesses moving forward. Zoom meetings, Google Classroom, and Jamboards – another Google app – have provided adequate platforms for education as computer use becomes a larger component of the curriculum than previously imagined.

“Students can do a demonstration and send it to the teacher for evaluation,” Davis offered as an example. This year’s graduates may leave with a different list of achievements and competencies than before, she related, but that will hopefully leave them even better qualified for a workforce that is dealing with the same issues. Technology is also being used to help promote SCCTC’s programs to the participating school districts, as instructors make videos with Go Pro cameras and explain their respective curricula.

Another challenge this year is figuring out how to simulate the public component of a trades education that allows for students to render their skills to people outside the school system. Culinary arts students, for example, have long made food for meetings hosted by the school and weekly dinners for the general public, but they are currently only able to make and serve food to school faculty. Small engines and automotive repair students can only work on each others cars or staff vehicles.

“They do get the live work, but not to the extent that they normally would,” Davis lamented. Auto repair might be the program that gets back its public component first if administrators can develop a safe plan for vehicles to be dropped off at the campus and picked up after the work is done. Healthcare students are working on/with fellow students and with manikins. Some, Davis added, are also working in the private sector.

By mid January, most students were back to in-person learning. Davis said that she visited all of them prior to the holidays and encouraged them to stay safe over the break, to continue wearing masks and practicing safe-distancing measures as they would if they were in school. “I reminded them that that’s why we’ve been able to stay open,” Davis remarked.

Zabrowski’s approach to the inconsistencies has been to break the curriculum down into smaller pieces that are easier to pick up if they are dropped. Engine repair and auto mechanics are primarily hands-on, so he is using “Virtual Wednesdays,” when the campus is closed for deep cleaning, to prepare students for assignments on Thursdays and Fridays.

“We try to do it so, when they are here, they are full-blown hands on,” Zabrowski stated. Even then, he added, some students struggle with internet connectivity issues and the occasional loss of power during storms when they are home. “We’re all adapting.”

As a counselor, Davis is equally concerned about the mental and emotional well being of both students and their parents as they try to mitigate the many stress factors of the pandemic. For some of the trades students, the current learning models are far from what they expected upon enrollment.

“I think it is harder for them because they were really hoping for hands-on,” said Davis. “They may not be as good on the computer, their attention spans might be shorter, or their internet service my be lacking.”

She finds herself counseling parents as well. “Some have said, ‘It’s hard for me to be a parent and educate my children while also working or worrying that I may not have a job,’” Davis related. “I tell them, ‘Education is important. But don’t stress yourself out. You don’t want your kids hating you. Do the best that you can. We know that you aren’t a teacher.’”

“We make sure they get their education with whatever model it needs to be,” Davis maintained. “This too shall pass. We’re all in this together.” 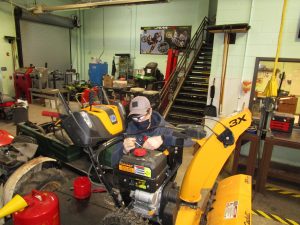