Canton Was Once a Playground for the Stars 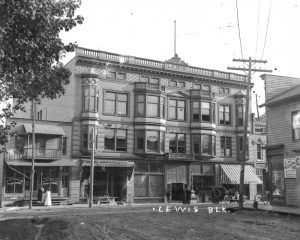 Main Street in Canton (top) as it appeared around 1900, and (above) the Lewis Block, which contained an opera house, a bank and Canton’s post office.

If the walls of the oldest buildings in Canton could tell the stories of what they’ve seen over more than two centuries, many might be inclined to believe that tales of the famous actors, artists, dignitaries and aristocrats that passed through were at least somewhat embellished. But the charm of this relatively small borough in southwestern Bradford County belies the hustling and bustling of Canton just a century ago when the population peaked at 2,154.

There was, in fact, so much activity in and around Canton during the 50 years that followed the Civil War that, for every story one unearths, another two can easily be missed.

The early history of Canton, like many other “frontier” towns in Pennsylvania, includes encounters with Native Americans, the arrival of European settlers and the clearing of hillsides for timber that would be used for construction and many other items.

In 1778, Native Americans were feeling great pressure to vacate the Wyoming Valley and then what would become Lycoming and Bradford counties. The Sheshequin Path from the Muncy Valley to the Towanda area ran south of present day Canton through a village at Cedar Ledge. Though Sullivan’s Expedition would eventually steal the headlines of the day, troops under Col. Thomas Hartley were the first to be commissioned to meet up with Col. William Butler’s troops at Tioga. 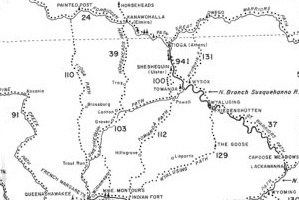 In an effort, perhaps, to cut off the Sheshequin Path, Hartley’s troops attacked Indians they encountered at Cedar Ledge on Sept. 26, killing many of them and scalping their chief. The remainder of the Natives fled back toward the southeast as did approximately 70 inhabitants of a village near present day LeRoy. The mountainous terrain between Canton and Tioga (Athens) was nearly impenetrable, and Gen. Sullivan’s troops made better time moving up the Susquehanna River. 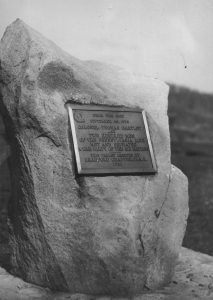 With the Indian threat all but over, white settlers, beginning with Isaac Allen in 1794, Jonas Gere in 1795, and Zephaniah Rogers in 1796, started staking claims in the township. Gere built a sawmill near present day Grover that he sold to Orr Scoville. German immigrant Jonathan Prosser was likely the first white man to settle within the boundaries of present day Canton. He built a mill that he sold to Jacob Grantier in 1801.

Ezra Spalding was one of many settlers from the Connecticut County who struggled with land claims in Colonial Pennsylvania when the King of England determined that titles in the disputed territory issued by Connecticut were invalid. Even though Pennamite loyalists burned Ezra’s home, his family remained in the area for many years and are credited for naming Cedar Ledge and building a small hotel there. Ezra is buried nearby.

Canton Corners was soon attracting settlers of different nationalities from the north, east and south, despite the difficulty in getting there. Some of the earliest inhabitants, like the family of David Lindley, literally carved their own roads into the township from neighboring villages.

In an early history of Canton, it was noted that residents had to travel to Towanda, Williamsport or Newtown (Elmira) for supplies. A public road first connecting Towanda with Franklin was extended to Canton Corners in 1798. The crude path enhanced trade between the southwest corner of what would become Bradford County in 1812 and its county seat. The lack of a major highway through Canton would affect its economy for many years to come.

Canton was incorporated as a borough in 1864, ten years after a rail line eventually called the Pennsylvania & Penn Central linked Williamsport and Elmira and no doubt made life and commerce easier for Cantonians and their surrounding neighbors. By 1869, the railroad was bringing much more than supplies into town. Hundreds of passengers a day were traveling from as far away as Philadelphia and New York to seek the purported healing waters of Minnequa Springs, known by white men traveling through the area as early as 1771 as the “Indian Healing Spring.”

Williamsport lumber baron and inventor Peter Herdic was among the prominent people to visit Canton and find relief from a rheumatic condition in the springs north of town and subsequently erect the first large hotel there in 1869. According to regional historian Joyce M. Tice, the massive structure could accommodate 600 guests. Subsequently, the Herdic Coach, a predecessor to the taxi designed by Herdic, was being built in nearby Alba.

“For at least the next 50 years, Canton was a tourist attraction,” Bradford County Museum curator Matt Carl explained. “A lot of people in the area lived off the Minnequa Hotel.” The first hotel burned down in 1878 and was replaced by a smaller inn, an annex near the springs, and a number of cabins that could accommodate as many as 300 people. When the second hotel burned in 1903, Carl noted, “That whole era basically came to an end.”

But Canton was booming by now, and new hotels were being constructed in the borough as the town had became a retreat for politicians and entertainers. At that time, its relative isolation seemed to be part of the attraction. The Lewis Opera House was built in 1898 and had room for the First National Bank of Canton and a post office. It had closed prior to burning down in 1942 which, Carl notes, was likely for the best as it was deemed unsafe due to limited exits. The Crawford Theater was constructed in 1912 and still exists as the Rialto.

“They brought a lot of performances into town for the people who were visiting Minneque Springs,” Carl explained. The Chemung Canal Bank sits where the Lewis Opera House once stood. “There were a lot of fires in Canton,” Carl said of the disappearance of so many icons, but a few remain, even if in other forms. The Mountain House, a hotel on Troy Street, for example is now Doc’s Irish Inn. Thomas Edison stayed at the Packard House, which is now an apartment house. 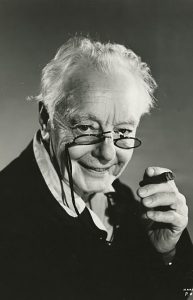 Among the famous people to fall in love with Canton and make it their home were the Davenports, a family of renowned actors, singers and architects, and Frank Mayo, an actor friend of Mark Twain who made popular the characters Puddin’head Wilson and Davy Crockett. Mayo shared his talents with the residents of Canton, and his family constructed Crockett Lodge south of town. Harry Davenport (above) made the transition from stage to screen and portrayed Dr. Meade in the film Gone With the Wind.

Casper and Jeanne Weis (below) were midget performers who found themselves among Canton’s elite from 1913 on, after they purchased the Hillside Mansion from Fanny Davenport. Casper conducted a musical act of little people when he met Jeanne, who was born in Paris and was already famous as Queen Mab, the star of the an act called the Lilliputans. They had performed together around the world and performed with the Barnum & Bailey Circus before settling in Canton to retire. 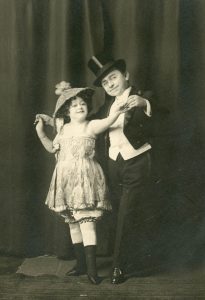 While culture and educational opportunities flourished, numerous other businesses thrived during this time. W.W. Gleckner and Sons manufactured harnesses, saddles and everything leather pertaining to history. The Crawford Mill was one of the larger operations to provide wood for construction and other industries. Sheldon Manufacturing made tent poles, flag poles, and other unusual wood products. Belmar Manufacturing patented a spreading clothes hanger that better gripped trousers. Belmar also started the Liberty Greeting Card Plant.

Belmar owner Louis Marble managed apple orchards outside of town as a hobby. His wife, Flora, and Davenport’s wife, Fanny, converted part of the Belmar factory for production of canned soup that was shipped to soldiers during World War I. Flora is also credited for starting the first nursing service in town, donating land for the construction of an office building staffed by nurses. Some of Canton’s oldest residents may recall going there for inoculations when they were school children. The building on Union Street also remains intact as an apartment house.

Canton’s people of note certainly did not all come from the outside, and the area produced its own stars that used the same railroads to venture out and spread their fame. They included politicians, musicians, book publishers and other entrepreneurs. The list is long, but here are a few of the most prominent: 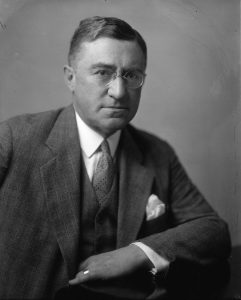 Louis T. McFadden (above) served as a U.S. Congressman from 1915 to 1935. The former First National Bank of Canton president authored the McFadden Act, which challenged the Federal Reserve system, and infamously pushed to have Republican president Herbert Hoover impeached, even though McFadden too was a Republican.

Charles Lee’s Great London Show was based in Canton and traveled up and down the east coast in the late 1800s. Canton-born Mial Eben Lilley was a blacksmith before studying law in Towanda and being elected to one term as a U.S. Congressman in 1903. Songwriter Joseph L. Townsend penned many hymns for the Church of Latter Day Saints around 1885. Hollis Dann was born in Canton, studied music in Boston and published numerous song books for the armed forces and for school instruction. The WWII Battle of Anzio survivor won two District 4 titles as a 32-year coach of the Canton Warriors High School football team.

There is much for Cantonians to be proud of in the military service of their residents; the town’s connection to the Underground Railroad; the establishment of local schools, the fire department, the Green Free Library, and the Canton Independent-Sentinel newspaper; and the Lake Breeze Hotel at Lake Nepahwin. But, alas, those are stories for another day. 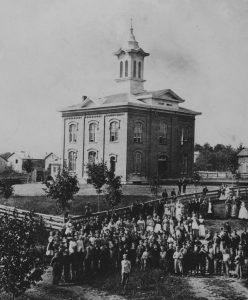 Canton’s first public school as seen around 1870 with students and faculty. 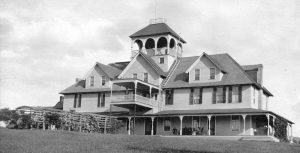 The massive Lake Breeze Hotel south of Canton served for many years as a church and youth camp before burning down in the 1950s.

2021-03-31
Previous Post: Summer Camps Permitted to Reopen this Summer
Next Post: Henry Sworn In as Mental Health Board Chairman