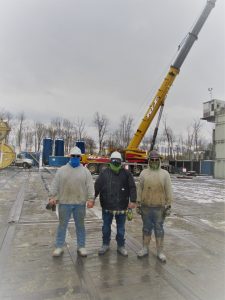 RLE employees (above, from left) Gary Morcom, Joe Gentile, and Justin Birtch take a short break during a move of a rig last week from the Housel pad in Lenox Township to the Warriner pad near Montrose.

While many businesses in northeastern Pennsylvania have benefited from natural gas production, several companies modified their business models specifically to provide support for the gas industry.

One of those, RLE Enterprises of Moscow, Lackawanna County, is marking an anniversary of sorts with Cabot Oil & Gas Corporation. The development of the Marcellus shale lured RLE to the gas fields of Susquehanna County, and the two companies have learned to rely on each other for the past decade.

RLE was established in 1991 by John Gentile, Sr., primarily as an excavating company. Family-owned and operated, RLE grew to employ 15 people by the time John passed away unexpectedly in 2007. His son, John Gentile, Jr., better known as “Johnny,” was 21 at the time he took over the reigns as company president.

The relationship began in 2010 when between Cabot contracted with RLE to move drilling fluid with tractor trailers from one gas pad to another. RLE proved their adaptability when they stepped up to start building gas pads for Cabot and handling reclamation upon their completion. RLE also plowed snow for Cabot.

“That led to the rig moves, compressor hauling and GPU hauling. And that kind of tied the trucks together with the cranes,” Johnny said of the evolution. “Our motto was ‘Never say No.’ We’re seasoned to the demand of service.” 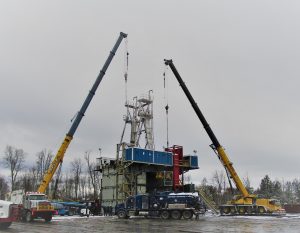 That can-do attitude helped RLE develop four divisions that include towing and garbage hauling and RLE Equipment in Springville, employing a combined 150 people. RLE’s diversity got them through an industry slump about five years ago. “When the dip hit, other companies had to leave town,” Johnny recalls. “Our employers helped us stay busy. We were able to weather it across the board.”

Johnny credits his success to lessons his father shared with him during his early years with the company. “I’d never have made it through this roller coaster ride and be this far if I didn’t get to spend the years that I got with him,” Johnny remarked. “He taught me how to be tough, humble, respectful and to always keep your word.”

“RLE has become an integral part of our operations, trusted to take on big jobs for which few are as qualified,” said Bill desRosiers, Cabot’s manager of external affairs. “Some people see those Wide Load signs as an inconvenience. When we see those signs on RLE vehicles, we see a trusted team of experts who execute the movement of our rigs and other equipment with safety and precision.”

“Now that we are established with Cabot, it’s a pretty steady work flow. Our RLE employees work hand-in-hand with Cabot employees to get things done,” Johnny related. “I look at Cabot as a main artery or the right arm of our business. I hope there’s a mutual respect there and they feel the same about us.” 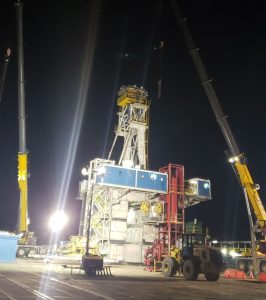