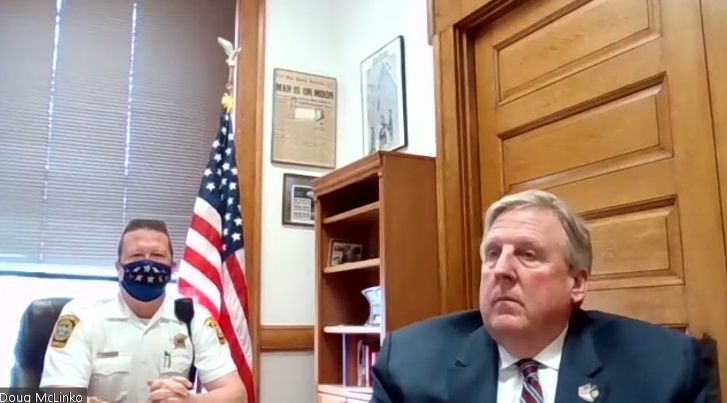 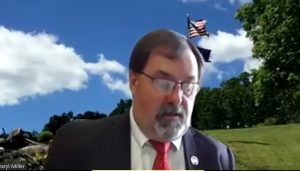 Bradford County sheriff C.J. Walters (top, left) read a proclamation marking National Police Week during the commissioners meeting held at the courthouse in Towanda on Thursday. Commissioners Doug McLinko (top, right) and Daryl Miller (above) offered notice that the county will not cover the cost of any cases brought to court that are not based on constitutional law.

Bradford and Wyoming counties share a border and a historic river that flows gently past their respective seats of government. They are two of four counties in the Endless Mountains heritage and tourism regions. Rural in nature but also part of the same Marcellus shale gas play, it would seem as they were country cousins, even if not as close as siblings.

But, since May 1, the people in these Pennsylvania counties have never felt farther apart. That was the day that Gov. Tom Wolf laid out his plans for reopening the county from the COVID-19 shutdown by regions, rather than county-by-county, as he had directed their residents to stay home. On May 8, Bradford County began the tedious process of opening the doors of a set of businesses that had previously been deemed by the governor as “non-essential,” like non-grocery retail markets.

Meanwhile, Wyoming County businesses remained idle, as its citizens grew restless. On May 12, the Wyoming County Commissioners reported that they had decided not to usurp the governor’s guidelines after Wolf warned in a press conference on Monday that he would withhold funding from rogue counties and could have the licenses revoked of businesses that followed their county’s lead.

On Thursday morning, the second rally in two weeks was being staged on the courthouse lawn in Tunkhannock as the commissioners held their weekly work session above them on the second floor. Commissioner chair Rick Wilbur acknowledged the rally and reiterated the decision of the board to stay the course, despite the peaceful protesters’ wishes.

“It puts us all between a rock and a hard place,” commissioner Tom Henry said of the governor’s threats to revoke licensing.

On Tuesday, Wilbur had said that, after consulting with their solicitor, they had determined that the governor’s guidelines were indeed law because he had passed them through the state’s Supreme Court. (Read it here: http://www.endlessmtnlifestyles.com/?p=16132)

“We do not have the authority,” Wilbur stated again on Thursday, noting that the commissioners had sent another email to Gov. Wolf for permission to open and ask as well how to get from yellow status to green.

Rep. Karen Boback, participating in the meeting by phone, said that she had been working with the county’s COVID-19 Task Force and was hopeful that Wyoming County might be moved to the yellow zone on Friday. “When we become yellow, we’ll be ready to move forward,” she stated.

An hour later, Bradford County commissioners Daryl Miller and Doug McLinko held their regular twice-monthly meeting, also online. While the tone of their conversation was decidedly more upbeat, they took a novel approach to the possibility that legal action might be taken against business owners still on the non-essential list who choose to open.

Among numerous proclamations they read that had at least some relevance to the health crisis, their passage of Resolution 2020-08 – The Bill of Rights resolution – made it clear that Bradford County would not expend any of its own resources to prosecute “unconstitutional laws or mandates.”

Commissioner chair Miller stated several times that it seemed almost unfathomable to him that he should have to assert the county’s constitutional rights, but maintained that the commissioners were upholding the oaths they took upon coming into office to defend the constitution. “To have to read this – to have to restate the obvious – is unbelievable,” Miller remarked.

Miller suggested as well that they did not feel that it was their job to interpret the legality of the governor’s edicts concerning his response to the coronavirus. “We cannot determine the constitutionality of laws,” Miller stated. “We’re not a court to determine that.”

“There is nothing constitutional. There have been no laws passed,” McLinko countered. “Our constitution is getting shredded. They are ripping our liberties away.”

McLinko’s jabs at Gov. Wolf were even more pointed. “Tyranny is when you fear your government, and we should never fear our government,” he stated. “We should never fear them coming into our businesses and shutting them down. This governor is out of bounds. Hopefully, we will get this resolved. So that we will never have to go through this again.”

In the work meeting in Wyoming County, commissioner Henry reported that he had been in Bradford County the previous day to speak at a Drug Treatment Court Graduation and was impressed with how businesses were handling their re-openings and of the high level of compliance among shoppers.

“Everyone was so friendly and giving each other space,” Henry said of a stop at Shores Sisters in Wysox. “And everyone was wearing a mask.”

Henry expressed optimism again later on Thursday that the tide would turn in Wyoming County’s favor during the governor’s press conference scheduled for Friday. But, just two weeks ago, he and his fellow commissioners, as well as Wyoming County EMA director Gene Dziak had the same gut feeling, until about 20 minutes before the governor revealed his first color-coded map that placed Wyoming County in the red.