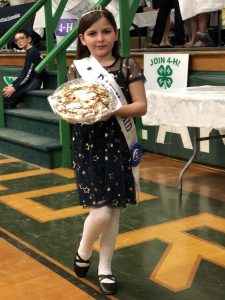 The Bonavita family brings a variety of pies to Elk Lake High School every year for the annual contest and auction. Above, Autumn Bonavita displays a peanut butter pie in her days a Dairy Promotion court member.

If one were to assume that the more time someone spends in the kitchen, the better the outcome, that’s certainly true of the Bonavitas. Members of the family will be entering pies again next week at Susquehanna County Farm and Home Day at Elk Lake High School, continuing a time-honored tradition that goes back as far as the original Dairy Day events.

“I think we’ve put a pie in every year,” said Cindy Bonavita. “Our kids were all part of 4-H.”

Not only are the pies judged by a panel of local dignitaries and everyday pie lovers, they are auctioned off at the end of the event, with proceeds being split evenly between Susquehanna County 4-H and Susquehanna County Dairy Promotion.

Cindy’s culinary skills go way beyond pies. She has operated Cindy’s Catering for nearly two decades, and her food truck has proven popular from Montrose to Meshoppen. Prior to that, she coordinated lunch for Dairy Day, working in the high school cafeteria with several cafeteria staff members. In addition to roast beef and mashed potatoes, Cindy recalls, “I made many cherry cheese cakes. Up to 500 of them.”

Over the years, Cindy and her sisters Lori and Cherie and brothers Chris and Stanley kept the family tradition going, as the next generation – Alex, Kyle, Austin, and Autumn – moved up through the ranks of 4-H, cooking, baking and showing animals. Lori was a cake decorator at Bricks Market in Tunkhannock. Chris and Stanley had long histories of taking animals to county fairs. Together, they operated Jon-Ann Farms in Auburn Township.

Sadly, siblings John Jr., Lori, Chris and Stanley passed away between 2014 and 2018. Their parents, John Bonavita Sr. and Mary Ann passed away in 2013 and 2015, respectively. Cindy admits that the losses diminished her enthusiasm for baking for a few years, but she remained active for the sake of her niece and nephews. In 2016, Autumn, Kyle and Austin all won the junior division.

Her perseverance in helping the youths in the kitchen paid off. And those pies have became an annual staple at Dairy Day/Ag Day. Cindy is making plans for helping them get pies to Farm and Home Day, even though all but Autumn have aged out of 4-H. The others now compete as adults. Cherie still enters a pie too.

Their accumulative wins have been impressive, with peanut butter, banana split, and lemon raspberry pies being the most popular over the years. The Bonavitas appreciate that local industry representatives have made the auction at the end of the day a bit of a contest of its own, as the youth groups end up with more money for projects.

“It’s all about the bidder wanting to support the kids. It’s not unusual for an 8-year-old 4-H member or Dairy Court member to have the high pie at the auction,” said Susquehanna County Dairy Promotion director Evie Goff of pies fetching several hundred dollars each. “We live in a generous community when it comes to supporting our youth organizations.” Evie routinely enters fruit pies, such as apple and peach or her family’s favorite – apple/peach/blueberry.

Relatively new Susquehanna County 4-H educator SarahRae Sisson was no less than shocked when she witnessed her first pie auction. “The first time I heard about this happening and pies selling for hundreds of dollars, I was like, ‘There is no way that this is really a thing,’” she remarked. “Then I saw it happen with my own eyes, and my jaw dropped.”

Pie judging at Farm and Home Day on April 18 will begin at 1 pm, followed by the auction at 2:30.