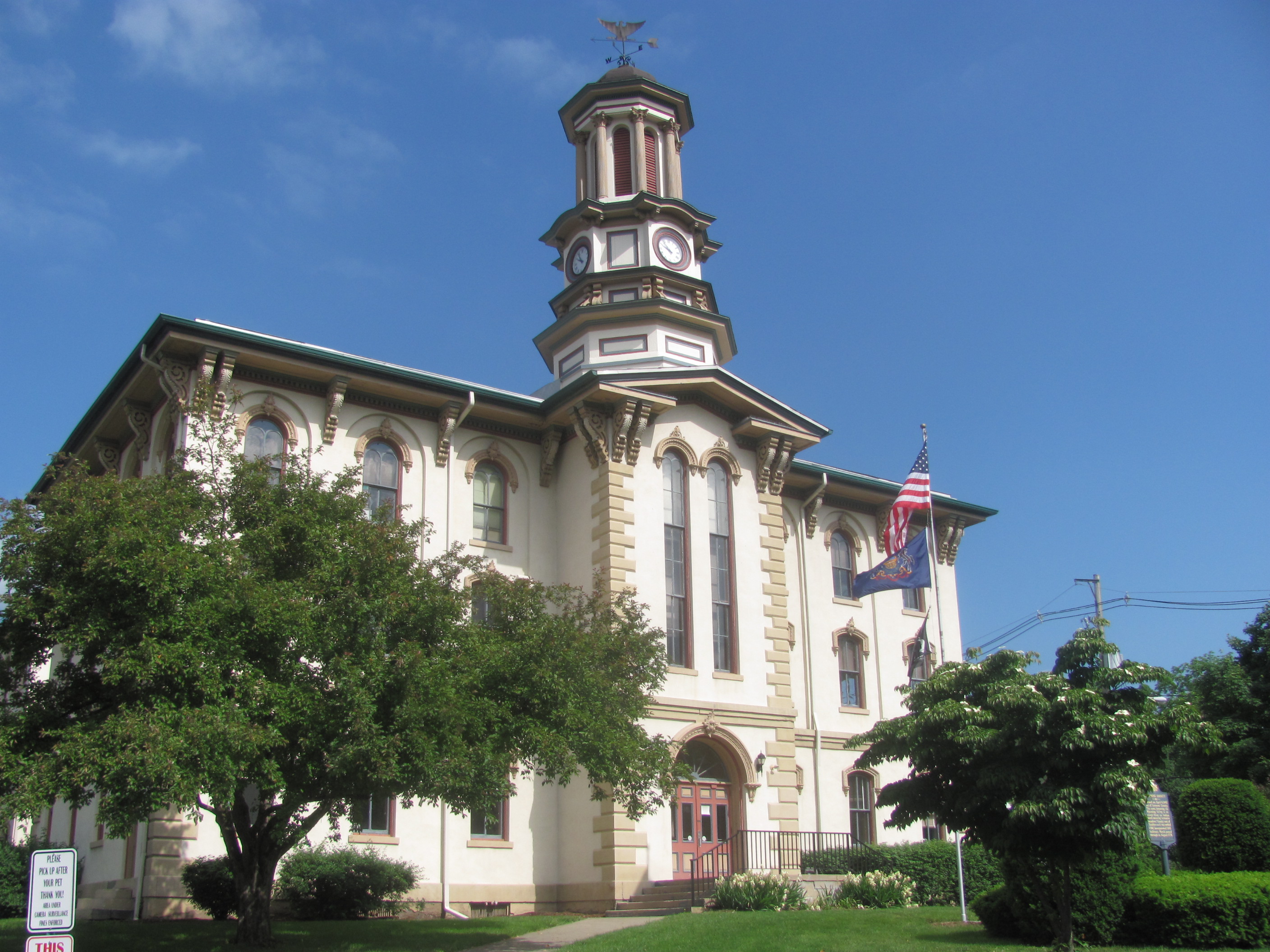 The Wyoming County Commissioners moved steadily through an ambitious agenda on Aug. 20, with chairman Rick Wilbur addressing the fractured audience from home. In addition to reporters, participants included sheriff Bob Roberts and director of elections Flo Kellett on site and Rep. Karen Boback and Wyoming County Chamber of Commerce president Gina Suydam via the internet.

A wide array of topics were discussed, as the commissioners gave reports on the many meetings in which they have taken part. While precautions associated with the coronavirus pandemic continue to dominate conversations, other important matters are finally finding their way back to the surface.

The commissioners are looking at ways to remove blighted homes to get tax delinquent properties back on the rolls. The owners of many in question have abandoned the properties. In the past, commissioner Wilbur explained, a county would need to have its own Department of Health to condemn a home. “But there might be a way around that,” he suggested.

Commissioner Ernie King is working with Jesse Ergott, president and CEO of NeighborWorks, to see how the state’s Land Bank Act might provide the county with the leverage it needs to demolish buildings that reduce the potential value of a property.

“It’s in its infancy,” Wilbur noted. “It will take a while to get it going.”

A number of properties were put up for tax sale recently for which the bids would not have covered the taxes owed. Due to the condition of the homes, the commissioners noted, it would cost a prospective buyer more to clean it up than the property could ever be worth again. King said that he and Ergott are looking into the legalities of Land Banking as they would apply to the situation here.

Flo Kellett was on hand to get approval for the purchase of a high speed letter opener and a commercial grade shredder to deal with a large amount of mail-in ballots expected for the November general election.

Commissioner King related that mail-in voting in Wyoming County jumped to nearly 3,600 for the spring primaries from an average of 300 per year. As many as 6,000 mail-in ballots are expected in November.

Mail-ins were opened by hand during the spring primaries and, according to commissioner Tom Henry, took the better part of the day to be counted. The equipment will be paid for with CARES grant funding for COVID-related election expenses.

In another election-related matter, the commissioners tabled a request from the solicitor of elections to grant the relocation of the Mehoopany Township polling location from the firehouse to the township building. The board had previously tabled the request when Mehoopany Township supervisors indicated that they did not want to handle voting at the township building, while the firehouse has much more room for parking and safe distancing. It was agreed that Henry would contact the solicitor after the meeting for clarification.

The commissioners recently met with a regional U.S. Census manager to discuss problems with turnout. Overfield and Exeter townships were cited as two municipalities with a low response rate to the forms sent out at the beginning of the year.

Wilbur said that numerous county residents, including himself, have been visited by census takers walking door-to-door, even though he had already completed the form online. There are some problems with the system that keeps some addresses on the rolls that have already been recorded, he noted, and sometime the counters (aka – numerators) are sent to homes where mistakes may have been made on the online form.

“If you are visited by a numerator, fill it out again,” Wilbur suggested. “It only takes a few minutes, and you will only be counted once.”

The numerators too are encountering challenges like being sent repeatedly to structures in remote areas of the county that turn out to be hunting cabins or summer homes. Gina Suydam asked if numerators could meet and go over their lists with township supervisors in areas like Forkston and North Branch townships to reduce the wasted trips. Wilbur saw no reason why they shouldn’t, given that a numerator can credit a neighbor of a property in question for confirming that the home is only seasonal.

Sheriff Roberts reported that a safety grant procured by his department will allowed for the startup of a new Safety Committee that will address a number of issues at the county level. First on their agenda is to develop evacuation plans for county buildings.

“We’ve been pretty lax on that over the years,” Wilbur conceded.

When asked what had become of a planned “active shooter” drill proposed last year by former commissioner Mike Stabinksy, Henry said that he was hopeful that this grant would put that project back on track, noting that the previous proposal was too dependent on other entities that were already busy.

Roberts agreed, saying that he’d like to see the active shooter drill back on the schedule for the first quarter of 2021.

Requests for Support Met With Scrutiny

Under the topic of Correspondence on the agenda, the commissioners discussed three letters requesting support from the board for varying issues. They immediately and unanimously approved a request from Melissa Swire to proclaim Wyoming County as a Hidden Heroes County. Swire was recently named a Dole Fellow Caregiver by the Elizabeth Dole Foundation, and the county’s endorsement will allow her to pursue additional resources for county veterans. Rep. Boback had also asked for the commissioners’ support.

A letter from Protect Northern PA asking the commissioners to support the organization’s efforts to halt production of a liquified natural gas (LNG) plant in Wyalusing, Bradford County, was turned down. Wilbur said that he and his fellow commissioners agreed that the completion of the plant is vital to the natural gas industry which is a significant economic driver in the region.

A request for support of a Black Lives Matter rally planned in Meshoppen this Saturday drew a mixed reaction but a unanimous rejection. “We are not in support of it, and we will not be at the rally,” Wilbur stated. “They seem like a good group of people, but I think we’ve been a bit misguided by their intentions.”

The letter was from Brooke Corridoni, spokesperson for The Peace Project. The Meshoppen resident started the project, through which she hopes to have a professional artist paint a mural on a rock formation facing Route 6, after she painted “Black Lives Matter” on the rock (below). Within 24 hours, the message had been painted over, which sparked a vicious Facebook debate and the formation of another group that plans to protest the Peach Project rally, which is scheduled from 3 to 5 pm. 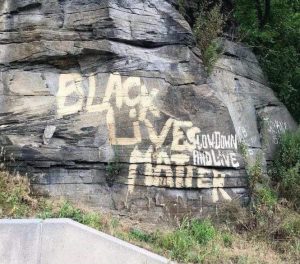 “Unfortunately, it has become a very volatile issue in this county, and I don’t think we can be involved with it,” Wilbur remarked.

“We have no business being involved with it,” King concurred.

Another letter received by the commissioners was from PA Rep. Stanley Saylor requesting a report on how the county is dispersing $24-million in COVID-relief funds earmarked for small businesses that have lost revenue due to the pandemic. The commissioners just extended the deadline for applications to Aug. 28 because too many people had questions for which they could not get answers from Harrisburg.

“We’ve been asking questions and waiting and finally got some of the answers last week,” said Wilbur. Saylor, head of the state’s Appropriation Committee, wants the details by Aug. 28, which Wilbur maintained is impossible.

Gina Suydam interjected that other counties are just rolling out their applications and credited the commissioners for being ahead of the curve. “You were very proactive in getting it out there,” she said.