In: Scouting
With: 0 Comments 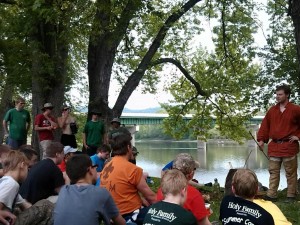 After a heavy thunderstorm on May 16, Boy Scouts from the Andaste District prepare their boats for a paddle from the Wysox public river access to French Azilum. The lunch stop in Wysox included a presentation by Dan Rhodes (above) and was part of a three-day sojourn during which the Scouts were introduced to the concept of minimalist adventures. Rhodes portrayed French explorer Etienne Brulé, the first European to float down the Susquehanna River 400 years ago.

Approximately 60 Boy Scouts and 20 adult leaders who mostly hailed from Bradford County left behind most of the comforts of home last weekend and took to the Susquehanna River for a three-day sojourn from May 15 to 17 that pitted them against nature and their own expectations.

The boys were members of the Andaste District of Five Rivers Council and have embarked on an outing of one kind or another every spring, often to Camp Brulé in Sullivan County. Each year, however, the number of supplies brought by leaders and scouts alike grew in contrast with traditional aspects of Scouting.

“All they knew was ‘car camping,’” said John Johnson, leader of Troop 19 from Sayre. In other words, each of the scouts, who additionally come from Sullivan County and the Waverly, NY school district, was arriving with a carload of unnecessary gear that included electronic devices.

Andaste District Troop leaders decided it was time to try something different. Johnson contacted David Buck of Endless Mountains Outfitters (EMO), who also serves as the region’s Greenways Coordinator through the Endless Mountains Heritage Region (EMHR) and asked if he would help them to coordinate an adventure along the Susquehanna River.

Johnson acknowledged that, for many of the boys, a downriver paddle and two nights of camping and making dinner over an open fire would be a first-time experience. He also wanted the Scouts to learn that environmental stewardship and accessibility to the river go hand-in-hand.

“What we were trying to do with this trip was to get the boys to realize that they can go camping by taking their gear with them,” Buck related. The Scouts met and camped the first night at Larnard-Hornbrook Park north of Towanda and camped the second night at the French Azilum Historic Site south of Wysox.

Johnson explained that the participants were given one basic rule beforehand. “If you can’t fit it in your canoe or kayak, you can’t take it with you.”

That concept was put to the test on Saturday morning when camp was broken down and the troops prepared for the first leg of their journey down the Susquehanna River. While Johnson was pleased overall, he noted that some important gear still had to be packed into vans and driven to French Azilum.

The Scouts made three stops on Saturday before reaching their second camp site; the river park across from Towanda, the public river access at Wysox, and a campsite area on the the large group of islands just below Wysox that are owned by the Pennsylvania Department of Forestry, DCNR.

The rapids below Towanda proved to be tricky for the Scouts. Though nobody capsized, several of their boats took on water. At Wysox, most of the sojourners opted for bagged lunches that they had brought with them, while some started fires in grills on site and cooked hot dogs and hamburgers.

Bradford County Conservation District Educational Services Coordinator Dan Rhodes, who had been on the river with the boys, provided instruction as to how early settlers and Native Americans in the area would have started fires hundreds of years ago. He amazed the Scouts when he successfully ignited naturally combustible materials using the flint and steel method in the blowing mist of a thunderstorm as the Scouts were forced to seek shelter under a pavilion.

At the island, DCNR service foresters Chad Gadsby and Matt Crosbie spoke to the boys about the agency’s role in acquiring the wooded plot and making it accessible to water recreationists for camping and hiking. “The Bureau of Forestry relies on volunteers to develop and maintain them,” Crosbie explained, noting that he also spoke to the boys on the importance of minimizing their impact while camping.

At French Azilum, Rhodes, who was attired throughout the sojourn as early 17th century French explorer Etienne Brulé who traveled through the area in 1615, gave a presentation on edible plants, some of which he helped the boys to locate and sample.

The troops endured numerous showers and thunderstorms from Saturday through Sunday, but at least 20 of them opted to get into the river one more time on Sunday morning for a final paddle to EMO headquarters in Sugar Run.

“Everybody was in good shape, and I didn’t hear anyone complaining,” said Buck, who, along with Johnson termed the adventure in minimalism a great success .

Seeing that stretch of Bradford County from the water was eyeopening to both Scouts and leaders, Johnson related. Like Brulé 400 years before him, he added, “I’d never been on that part of the river before. We went under the bridge at Towanda, and it took me a few minutes to realize that we were right behind Craftmaster.”

Johnson noted that the feedback from the boys was very positive. “The presenters thoroughly engaged them,” he stated.