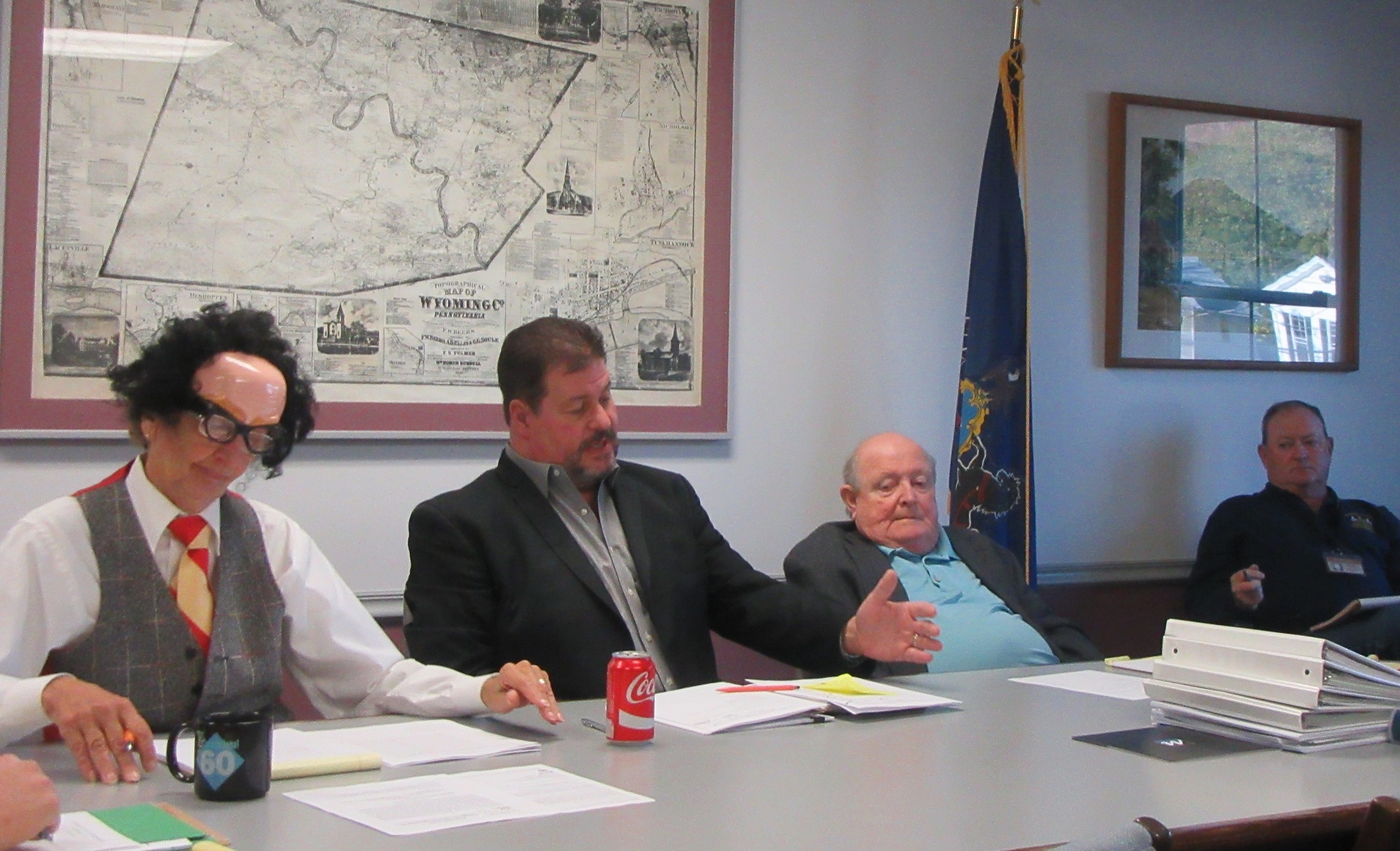 Wyoming County Commissioner Judy Mead (above, left) brought some Halloween fun to the Oct. 31 public meeting of the commissioners at the courthouse in Tunkhannock, prompting Commissioner Tom Henry (second from left) to quip that he was seated between “two old men.”

The Oct. 31 meeting of the Wyoming County Commissioners brought attention to a number of initiatives and programs focused on the opioid crisis in the area, as well as exposing a bias on the part of the court system as to options for treatment and counseling for those dealing with addiction. In the same session, the commissioners did their best to codify flood-related issues from the county’s perspective.

A number of meetings scheduled for November will provide opportunities for public officials and constituents to get together to discuss the opioid crisis and treatment options. County EMA director Gene Dziak (above, right) announced that the county has a solid supply of naloxone, a drug used by emergency responders to reverse the effects of a heroin overdose, and a new opportunity to apply for federal grant money to purchase more.

On Wednesday, Nov. 8, Rep. Karen Boback will host an “Opioid Dangers” forum at Tunkhannock Area High School from 6 to 7:30 pm (Read more about it here: http://www.endlessmtnlifestyles.com/?p=8734).

On Thursday, Nov. 9, Not One More in Wyoming County will sponsor a Narcan training class at the Tunkhannock Public Library at 7:30 pm. The event is open to the public. 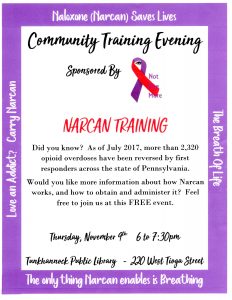 On Thursday and Friday, Nov. 16 and 17, Dziak will participate in and speak at a regional drug and alcohol conference to be held in Wilkes-Barre.

Encouraged by the news and on-hand to bring more to the discussion were Not One More in Wyoming County members Lizz DeWolfe and Celeste Kranick. DeWolfe distributed a photo and information about the Naloxbox (below), an emergency Narcan administration unit finding its place alongside publicly accessible defibrillators. 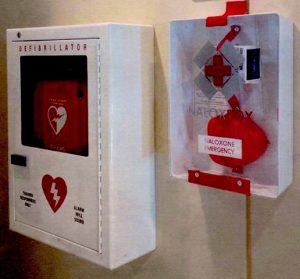 The cost is approximately $60 per kit, DeWolfe (below, right) related, and the sponsor organization receives a text whenever the box is open, alerting them to either actual emergency use or tampering with the unit.

Kranick (below, left) reported on a successful second rally for the group in the fall and reported that her suggestion of bringing Michael DeLeon, founder of the Steered Straight speakers series and a presenter at the Not One More fall rally, to the Tunkhannock School District has been well-received by superintendent Heather McPherson. Streered Straight is not just about drugs and alcohol, Kranick noted, it is also about confidence and character building.

Lori Bennett (below, second from left), business office manager at Wyoming County Special Needs, asked the commissioners why people arrested on drug offenses and recommended for outpatient therapy are being directed solely to the ABT program when there are several other viable options, including Trehab.

The commissioners have been wondering the same thing, as they sit on the Trehab board. Commissioner Ron Williams (top, second from right) said that he asked president judge Russell Shurtleff why Trehab isn’t getting any references, and the Judge told him it is because ABT maintains a presence during drug court proceedings, which are held on Thursdays, and Tehab does not. District Court is under Shurtleff’s control, Williams added.

“This is about choices,” Kranick maintained.

“We believe in that too. At the jail, we offer choices,” Commissioner Tom Henry replied, suggesting that interested parties pose their questions to the judge at the next Wyoming County Prison Board meeting, which will be held on Tuesday, Nov. 14 at 9 am in the commissioners board room.

Having heard the concerns of flood victims at the public commissioners for the better part of the past year, Commissioner Henry spoke on behalf of the county as to arguments that Housing & Redevelopment Authority – and the agency’s grants administrator Lisa Hahn in particular – did not properly administer nor advertise the availability of state funding that might have been given to victims of flooding in 2011.

First, Henry made it clear that the board would no longer field second-party public commentary on the status of properties owned by people who are not in attendance. “They need to contact the Gene (Dziak) and the county,” he remarked.

“I’m not here to defend Lisa,” Henry said in response to continued charges by Forkston resident Louise Kling (above, second from right) that Hahn was keeping a $500,000 grant a secret when she met with flood victims again in 2016. “She should be defending herself.”

“We’ve gone after every single penny that we can,” Henry stated to preface Kling’s suggestion that the commissioners are partially to blame. “It’s unfortunate that there are still some families out there suffering.”

The Housing & Redevelopment Authority, the commissioners explained, is a state agency that partners with the county on specific projects.

“We make appointments to the board. We do sign grants,” Williams related. “But we do not have oversight.”

Henry and Dziak offered further clarification to Kling’s questions about how square footage affects an application, describing it as just one of many elements taken into consideration that also include the number of bathrooms and bedrooms in a home, the method of its construction and flood water height.

“We tried every angle to fit you into a category,” Dziak told Kling. “The bottom line is that you are not in the 200-year flood plane.”

DeWolfe told the commissioners that HUD deputy regional administrator Richard Ott has promised her an investigation into the matter of grants and allocations on behalf of citizens who feel cheated by the process.

On the related topic of stream work to mitigate future flooding, Henry related, “We have talked to people in Bradford County about what can be done, and they’ve promised to keep us in the loop.”

Williams added that they have taken state officials up the streams to see the potential for repeated disasters on many occasions. “They smile for the cameras, then they leave and you never see them again. We never see a check,” Williams remarked, adding that funding the construction of ball fields and the planting of seedlings on stream banks is meager approach to the situation when, “we still have lives at stake.”

“Bradford County has offered to work with us by resurrecting a plan they put together after the last flood,” Henry noted. 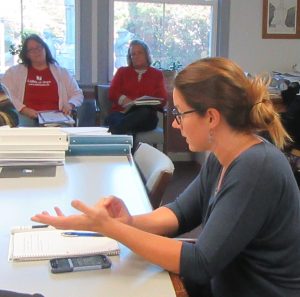 County planner Lynelle Welch (above, right) attended the meeting to announce the availability of mini grants up to $5,000 that will be available next year primarily for conservation and recreational enhancements under the county’s Legacy Fund or Marcellus shale money. In the past, such grants have been awarded to Eaton Township for the Seneca Trail, Exeter Township for George Hock Memorial Park, Factoryville for Christy Mathewson Park, the North Branch Land Trust for the Howland Preserve and Noxen Township for its recreation center.

The county has made $50,000 available, and applications are available at www.wycopa.org. The funds can be used as a match for DCNR grants, but applicants must identify another matching source if not also applying to DCNR for a project.