Festival’s Best Elements Still a Secret to Some 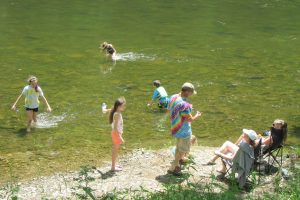 It surprises me to still hear local people saying that they had no idea that camping is free for people who purchase weekend passes to the NEPA Bluegrass Festival. There is in fact no better way to fully enjoy everything that the festival has to offer and not have to worry about driving home at night. What also surprised me this year was learning how many people from the Wilkes-Barre/Scranton area come and go from the park for work and other responsibilities as Mike and I have for the past three years.

Any time you get home from a big camping adventure, it takes a few days to get everything back in its place. That includes your supplies, your schedule, and your brain. The NEPA Bluegrass Festival, held each year the weekend after Memorial Day at Lazy Brook Park, is especially hard to forget because so much goes into it.

This was our fifth year at NEPA Bluegrass. I know it’s hard to believe me when I say that it keeps getting better, but it does. This is due in no small part to the fact that organizers Danny and Christa Stewart also get better at what they do because they make a concentrated effort to understand what festival-goers enjoy the most and what they think could be better.

Though the Stewarts control everything about the festival except the weather, they insist that the people are the bosses. They continually ask guests how they are doing and how everything is going for them. They read every questionnaire that patrons fill out. And they look at every Facebook post in which they are tagged.

Taking the time to see the festival from everybody’s perspective has much more to do with who wants to attend the annual event. It also translates to the camaraderie shared by the performers, vendors, and volunteers.

Volunteers are the backbone of any good organization, and the smiles on the faces of those who return to work at Lazy Brook Park each year make people from the front gate to the two stages and beyond feel welcome. They check people in, guide RV owners to their reserved sites, collect trash, deliver ice, drive shuttles, and decorate stages – anything that will close a gap or add something extra to the experience for attendees.

“I’m pretty particular about my vendors,” Christa maintains. “And we could never do this without our dedicated volunteers.”

Last year, volunteers Billy and Karen Ritter asked if they could decorate the Progressive Stage, known by locals as the pavilion near the creek. Acts playing there were always well-received, but the venue lacked the charisma that it deserved.

In 2016, a temporary stage was constructed, lifting the performers up so that they were better seen and could project their presence over the crowd. This year, the stage was embellished with license plates, a bed rail, a folky quilted flag, tools, and farmhouse implements. It looked like a hunting cabin or party cave in which you’d want to hang out whether a band was playing or not.

“They escalated that stage to the level that it needs to be,” Christa gushed. “They’ve really kicked it up.” Lana Messner also returned to work her magic on the Main Stage. “She is so meticulous,” Christa noted.

The Stewarts are willing to try new things and don’t hesitate to drop an element that doesn’t live up to their expectations. They’ve not re-invited bands and vendors that didn’t seem to fit in. This year, the stars aligned to provide the military salute that Christa had always had in mind.

She managed to book the US Navy Bluegrass Band for two days. She invited the color guard from the Wyalusing American Legion to participate. Navy band lead singer Kenny Ray Horton delivered a solid rendering of the national anthem on Saturday. And I introduced Christa to the NEPA Chapter of the Blue Star Mothers, who set up a booth.

“Tying in the military flavor wasn’t the intent, but it all came together,” Christa said afterward. “There were non-military people with tears in their eyes. It was all very respectful and very moving.”

Christa also let me put on my Games & Trivia Show in the Blue Pavilion the night before the festival officially began. While it was intended as a “thank you” in advance for the vendors and volunteers, it instead attracted the RV set, who enjoyed my mixture of bluegrass, folk, and classic country songs, TV theme trivia and the ever-popular Giant Jenga.

I was a little concerned that it had not gone over as well as anticipated, but my audience members shared with Christa the next day what a good time they had and were absolutely giddy about the prizes they won.

In the meantime, I learned from the vendors and volunteers that the event was too early for them. They wanted to participate, but they weren’t done working. Their suggestion that I conduct a separate late-night show for them on the Progressive Stage was well-received by Christa and likely to be part of next year’s festival.

The flexibility of performers not only exposes them to a greater audience but offers a unique cohesiveness to the festival. Nothing Fancy, Leroy Troy, and the Wilson Banjo Company, for example, delivered separate repertoires on the Main and Progressive stages.

“They do a great job for us. When you have bands that can appeal to both types of folks – traditionally and for the younger generation – that’s the mission for what we do,” said Christa. Crossing the bridge for both both age groups is purposeful, she explains, because it creates tomorrow’s bluegrass fans. “We do that that very tastefully here. We’re introducing to them to this music.”

Despite lower attendance on Sunday because of rain, Christa reported that this year’s NEPA Bluegrass Festival broke overall attendance records.

“It was our biggest year ever. Everybody had a great time,” she stated. “Gate numbers on Saturday were unbelievable. Some of the food vendors sold out on Saturday.”

While it’s no secret that their own hard work has paid off, the Stewarts still give the credit to everyone else involved, including Tunkhannock Township and its residents, who share their beloved park with bluegrass fans for the weekend. “We feel very blessed with the love and support from the local community,” Christa (below) said humbly. 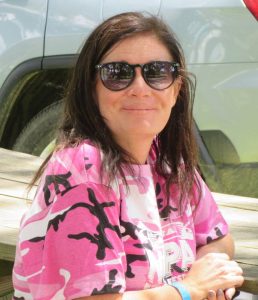 Please check back for a photo gallery of performers, pickin’ parties, activity and crowd shots from the weekend that I will post soon as a separate feature. 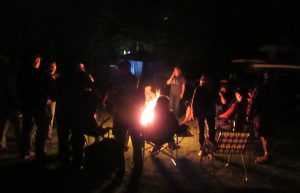