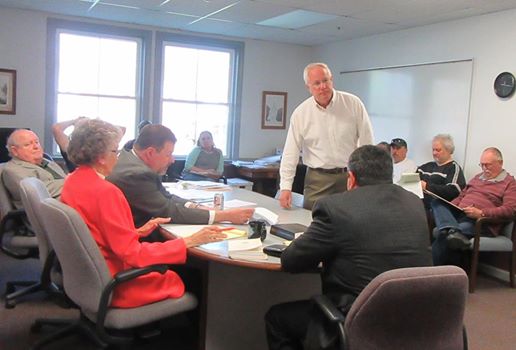 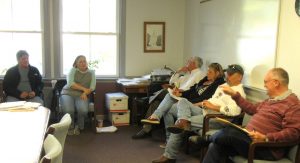 2011 flood victims (above, from left) Charlie and Joanne Price, Bob Pitcavage, Lizz and Lenny Dewolfe, and Kevin Ray wait for the beginning of the Wyoming County Commissioners meeting on Tuesday at which Pitcavage (top, standing) pressed the commissioners and county EMA director Gene Dziak (not pictured) for clarity on the PEMA flood buyout programs.

The regular meeting of the Wyoming County Commissioners on April 18 was once again dominated by conversation about the recent PEMA proposal to offer buyouts to owners of flood-prone properties in Meshoppen. While little had changed from the perspective of the commissioners over the course of the previous two weeks, residents of Forkston and Eaton townships came armed with new evidence that seemed to indicate that the state is giving everyone the runaround.

Bob Pitcavage, who owns land on Dymond Terrace in Eaton Township, related a time line of meetings and dealings with officials about flood buyouts that started with him obtaining an application from Eaton Township in November 2011, just two months after the worst of the flooding.

Dymond Terrace, everyone seems to agree, had been deemed ineligible for the Round 1 buyout, but homeowners were encouraged at a Long-Term Flood Recovery meeting in July 2012 to pursue a Round 2 buyout. Pitcavage said that he routinely followed up on the applications and bits of information that he was given by PEMA officials such as Tom Hughes but got nowhere.

Pitcavage also accused Wyoming County EMA director Gene Dziak of never submitting the Round 2 applications to PEMA, based on an email Pitcavage said he’d received from Hughes. “I’d like to see an acknowledgement letter that they got it,” said Pitcavage.

Not only did Dziak, who was in attendance at the Tuesday morning meeting, flatly deny the accusation, he exhibited copies of Pitcavage’s application.

“Here’s your application here. We did turn them in on time,” Dziak retorted. “We drove them there (Harrisburg). I don’t know what happened to them after that. I would strongly suggest that you contact PEMA.”

It is becoming clearer that the mixed signals motivating many people involved – landowners especially – stem from confusing a Round 2 buyout that was apparently never processed and PEMA’s decision to offer a CBDG (community block development grant) to Wyoming County instead.

The criteria for the buyouts differ greatly in that block grants are earmarked by municipality rather than individual applicants.

“It’s not the individual that is deemed ‘low income,’” Dziak explained. “It’s the municipality.” He added that, in Wyoming County, only Meshoppen and Nicholson are considered by PEMA to be low-income. Nicholson, he noted, had no homes that were substantially flooded and therefore no applications.

Nobody at the local level, however, can explain why PEMA altered the funding stream nor how the rules seem to change routinely.

“We never thought there would be this grant money, so we went after it,” Commissioner Tom Henry remarked. “We went after everything that we could get.”

Most of the residents lodging complaints at these meetings insist that neither PEMA nor public officials have ever followed up on their repeated requests for information.

“Is it that difficult to generate a letter that says, ‘We’re sorry to inform you that your application has been denied?’” asked Joanne Price of Forkston.

Pitcavage reiterated that the ongoing delays and passing of the buck by officials is frustrating because he doesn’t want to make further investments into a property that may still be bought out. “I just want an answer so I can get on with my life,” he stated.

Lizz Dewolfe of Forkston shared recent emails received from PEMA representatives who wouldn’t even give her a clear answer as to whether possessing flood insurance was a requirement for the CDBG grant applicants in Meshoppen. The answer DeWolfe read to the commissioners was “in development. Will respond next week.”

“They are changing criteria as they see fit as we find things out,” Dewolfe exclaimed.

“They have been changing things like this from the start,” Commissioner Judy Mead replied.

“I wished we had worked together instead of apart,” Henry said of the growing chasm of information and trust.

He pointed again to Steven Bekanich, director of PEMA bureau of recovery as the person who should be providing the answers that everyone is seeking. Henry also read a copy of a letter to PEMA and DCED drafted by Sen. Lisa Baker and Rep. Karen Boback that addresses the concerns and questions brought up during the past few weeks. (Read it here: http://www.endlessmtnlifestyles.com/?p=7148)

He did not have an attachment to the letter that several people in attendance had obtained that included specific concerns about the criteria and buyout process, including how three Meshoppen properties that had been purchased after the 2011 flood had been approved, as well as a property with a mobile home and two rentals that were not flooded into the first floor.

Gene Dziak confirmed that the property on Mowry Street with the mobile home had been removed from the proposal, and that the rentals on Allen Street were under scrutiny.

Dziak implored those in attendance to exercise patience and allow the current process to play out. “I find it difficult to believe that all of these people are going to take the buyout,” he stated. “Historically, they don’t. That money’s got to move on.”

Dziak said that it is his understanding that leftover funds will rollover into “Project #2,” which would concentrate on “repetitive flooding and severely damaged” homes in other communities. Others in attendance insisted that officials have told them that the money would instead go back to Harrisburg.

“Things are going to move forward,” Dziak said hopefully. “I’m trying to move this forward, and I’m spinning my wheels.”

2017-04-19
Previous Post: Weather Window: Sunny Days to Give Way to April Showers
Next Post: Countdown is On for 10th NEPA Bluegrass