By: Rick Hiduk
In: Wyoming County Government
With: 2 Comments

Participating in their final public meeting together on Thursday were (above, from left) Wyoming County commissioners Judy Mead, Tom Henry and Mike Stabinsky.

The Wyoming County Commissioners unanimously passed the 2020 budget on Dec. 26, but it is likely that it will be reopened by the two newly elected commissioners after they are sworn into office on January 6. While the projected $11,418,981 requires no tax increase for county residents, approximately $1 million of it comes from non-renewable sources or funds that are not guaranteed to be replenished. It also does not project funding of the county’s pension plan.

When the time for passing the budget came up on the agenda, commissioner elect Rick Wilbur, who was seated behind county chief clerk Bill Gaylord, asked Gaylord if the changes that he and fellow commissioner elect Ernie King had recommended had been incorporated. Wilbur and King had sat in on the work meeting in which the proposed budget was discussed and had questioned a number of line items.

Among them are disputable income sources, including Act 13 (impact fee) disbursements from the PA Public Utility Commission, and $7 million in salaries that include wage increases of 2 to 2.75 percent. Wilbur had also questioned a line item depicting $112,000 in revenue that classified as “uncategorized” that has yet to been defined.

Gaylord responded to Wilbur, saying that the changes had not been made yet but would be as soon as it was approved. When Wilbur pressed him on the raises, commissioner Tom Henry remarked, “We’re in a contract right now. We can’t take away cost of living increases.”

It is true that the raises for unionized employees will remain intact. Any decisions put forward by Wilbur and King will only effect non-union employees.

Commissioner Judy Mead quickly made the motion to pass the budget as is, and it was seconded by commissioner Mike Stabinsky and carried. But the conversation was not finished.

“I want to go on record as saying that we are going to reopen it,” Wilbur stated, adding that King, who was visiting family and unable to attend the Dec. 26 meeting, was in agreement with him that the county cannot afford the salary increases.

“You’re going to take away their raises?” Henry retorted, adding, “You have no control over that right now.”

Wilbur, who will likely become chairperson of the commissioners’ board after he is sworn in, distributed envelopes to media members containing an editorial suggesting that the budget is flawed and paints a “rosy picture” of the county’s financial situation that he maintains is instead in serious trouble. King’s phone number is included for verification that he and Wilbur are in agreement on the budget status.

Wilbur’s concerns include an unfunded pension plan, high health insurance costs, and the reliance on Act 13 funds that might be drastically reduced or disappear completely if any Pennsylvania governor is successful in getting a severance tax passed in place of income fees.

“On January 6, 2020, we will reopen the budget as authorized by law and enact a wage freeze to begin working on our goal of financial stability,” Wilbur wrote in the letter. “We realize that this will not be popular among some employees, but we are at that point that we must make hard decisions today or be forced to make drastic ones down the road.”

(To read the letter in its entirety, click here: http://www.endlessmtnlifestyles.com/?p=15364)

Judy Mead, participating in her final meeting prior to retirement from the board after 20 years, asked for approval of disbursement of the Wyoming County Room Tax funds as per the recommendations of the Room Tax Committee and the Endless Mountains Visitors Bureau. Made possible by a tax levied on local hotel and bed ’n’ breakfast stays, $85,000 will be allotted this year to a variety of organizations.

Big winners were the Wyoming County Cultural Center, receiving $25,000 to support five projects; the Wyoming County Fair, receiving $14,500 for advertisement of both the fair and the Hallowwine festival; and the Tunkhannock Business and Professional Association, receiving $12,500 for the promotion of Founder’s Day, Christmas in Our Hometown, and the Hometown Fall Festival. Keystone College was granted $10,000 for general marketing and promotion and new trail wayfinding, educational and interpretive signage.

The commissioners approved a deal with Wayne County to house prisoners there at $65 per day if there is no room for them at corrections facilities in Wyoming and Susquehanna counties. There are currently two males and three females boarded in Susquehanna County. 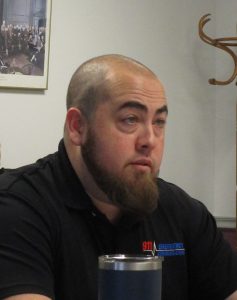 County 911 director Jeff Porter provided the commissioners with a report of recent purchases of equipment and other upgrades to communications towers that he oversaw to use up some funding that could not be carried into 2020. The cost of the enhancements was $171,305 after a $24,000 discount for year-end purchases. Half of that cost will fall in the 2020 column, nonetheless, and be covered with Act 13 money until it can be paid back.

Likewise, cost assessments for two county-owned bridges in Forkston and Falls townships were increased to $75,000 and $30,000, respectively, to avoid mandatory disbursements to municipalities of state liquid fuel funds, according to Bill Gaylord.

During a brief meeting the Wyoming County Prison Board held just prior to the regular commissioners meeting, county public defender Tim Michaels cited prison officials and staff for continuing to go above and beyond their job descriptions to find beds in treatment facilities for prison-bound individuals with serious substance use disorders. He also thanked the commissioners for their support over the past year as he worked to make his department more efficient.

Tom Henry asked for a moment of silence in honor of Charlotte Montross Hadsall, who passed away at the age of 101 on Christmas Eve morning. Hadsall, whom Henry described as “feisty and funny,” lived a very full life, including serving as a county commissioner to fill out the term of her first husband, Emerson Montross, who passed away in 1976.

The meeting was adjourned once and reopened by Judy Mead, who asked for the passage of numerous department policies that she explained had been pushed to the side of desks in the commissioners’ offices for too long. “These policies were way out of date,” Mead remarked, adding that she’d been determined to finish them before she left office. “We’ll put them on the new commissioners’ desks and let them shuffle them around. But at least they are updated.”