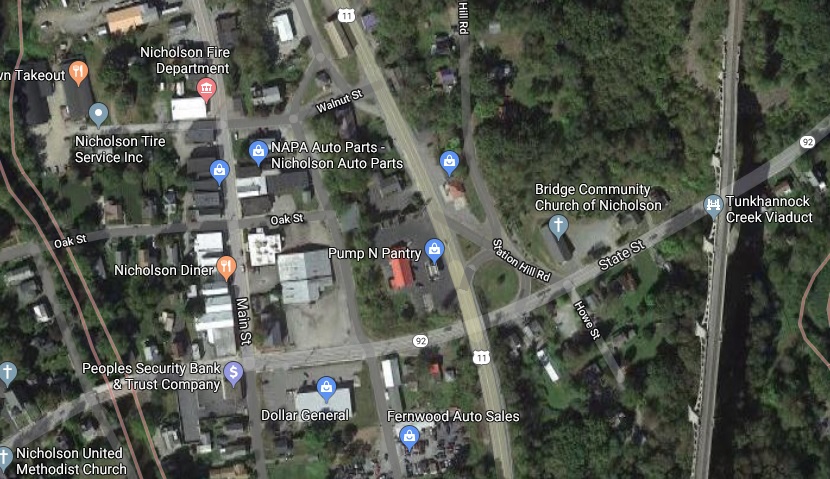 Edited from a Police Criminal Complaint / Map by Google

Dylan Carpenter, 22, Nicholson was approached by a Dalton Police Department officers on Nov. 27 while he pumped gas into his pickup truck at the Pump N Pantry in Nicholson and apprised that there was an active warrant for his arrest issued out of Lackawanna County.

Carpenter insisted that he had already taken care of the matter. When Ptlm. Stevens told Carpenter that he would still be taken into custody, Carpenter said “I’m not going” and allegedly took off running down Rt. 11 toward Walnut Street.

Stevens and Ptlm. Pisanchyn gave chase, yelling to Carpenter to stop and hearing him reply, “I’m not going back to jail!” They eventually cornered him, but he reportedly struggled with the officers as they tried to get handcuffs on him. While they were putting the cuffs on him, another male jumped into Carpenter’s white pickup truck and drove away.

As he was led to the car, Carpenter continued to maintain his innocence, albeit with a bit of swearing.

He was charged with flight to avoid apprehension, resisting arrest, making terroristic threats with intent to terrorize, and disorderly conduct of a physical offense.

2019-12-06
Previous Post: Penelec and Retiring Commissioner Honored by Chamber
Next Post: Mild but Wet Start to Next Week