As the recent public meeting of the Bradford County Commissioners was drawing to a close, a request from a reporter for clarification on a DCED grant application sparked a deliberation over what constitutes a “couch surfer” and how best to deal with them.

There were six agenda items falling under the umbrella of CDBG processes for 2019, including fair housing practices and public notifications, as well as the submission of an application to the DCED for the Emergency Solutions Grant (ESG) Program. Ultimately, more than $100,000 in funding will be to available to Endless Mountain Mission Center (EMMC) and Bradford County Human Services for reporting on and assisting homeless persons.

According to county grants director Amanda Boyer, this is the second year that she has applied for the ESG grant. The initial $50,000 covered the cost of studies that helped define the larger picture. “We saw there was some need to get some additional support for homelessness in Bradford County,” said Boyer. EMMC had previously been operating solely on donations and volunteer staff members. Boyer has applied for $175,000 this year, in hopes of getting at least $100,000. The money would be used for homelessness prevention and to help those who find themselves in need of housing or placement in an apartment under EMMC’s guidance.

In addition to providing a small stipend for EMMC executive director Tammie Stors, Boyer hopes that EMMC will be able incorporate another mobile home into the mix. “We are seeing more families than individuals having the need for housing. (EMMC staff) want to try to keep them out of the shelter and together as a family unit and a provide a more structured situation for the kids,” said Boyer.

As an addendum to the response given to Daily Review reporter Matt Hicks about the ESG funds, commissioner Ed Bustin added “This does not pertain to ‘couch surfers.’” Nobody in attendance expected the political sparring – rarely evidenced among the Bradford County commissioners – that followed.

Couch surfing (or sofa surfing) is a ubiquitous term with a variety of definitions. This was made clear when the discourse between Bustin and commissioner Doug McLinko erupted, more or less an unsolicited response to how authorities should deal with couch surfers. While there was no doubt the Democratic and Republican commissioners were broaching the same topic, they were certainly not “on the same page,” as McLinko continued to insist.

Neither, of course, was talking about the “international traveler making connections across borders” by staying on the sofas of relatives and friends that is referenced in the Cambridge English Dictionary. The comments by both Bustin and McLinko seemed to be focused on homeless individuals who sleep on various couches at the mercy of the primary residents, who are unable to offer them any better accommodations at the moment. The latter more closely adheres to couch surfing as defined by the Urban Dictionary of American Slang.

The disagreement centered on how an individual finds oneself in such a position. McLinko related that he has been assisting a property owner and friend who is trying to evict tenants from a home because they have allowed someone to stay with them who is “nothing but trouble” and bringing down the value of the property.

“You really don’t know who you are renting to,” McLinko said of such situations. “Court dates come and go. These people know how to work the system.”

“And I’m saying that the conversation has to be expanded,” Bustin countered, suggesting that many people who might be lumped into the unfavorable definition of couch surfers are simply in unfortunate situations.

“To me, it’s all the same. It starts with addiction,” McLinko remarked.

“We’re talking about identifying an issue,” Bustin maintained. “If you can’t identify them, you can’t help them.”

“We need to separate it out from the people who really need to be reprimanded,” said McLinko.

“We can’t just say that to the exclusion of somebody who is a victim of domestic abuse or child abuse,” Bustin responded. “They are couch surfers too. And we don’t want them to be homeless.”

“Re-entry houses are better options,” McLinko replied, an apparent reference to homes set up and monitored by local authorities for those who have previously been incarcerated, many of whom also have substance use disorders.

A modification in the salary designation for all county public safety employees, including the county detective, sheriff and deputies, and those employed at the 911 center was approved on June 13, resulting in across-the-board raises for numerous deputies. Formerly Grade 20, all are now recorded as G20PSC. In addition to making their pay more competitive, the commissioners explained that the change will help bookkeepers look at the wages of public safety employees separately from other county workers.

The starting wage for certified deputies was increased from $16.25 to $18 per hour. The rates for the eight sheriff’s deputies cited on the agenda now range from $18.64 to $22.94 per hour. Steven Chaapel, a deputy in training, has started at $13.90 per hour.

Though she is several weeks into her eight-week program, Alexis Ward (below) was introduced by the Bradford County Commissioners as a Grants & Tourism Intern as a candidate from Bradford County Action. 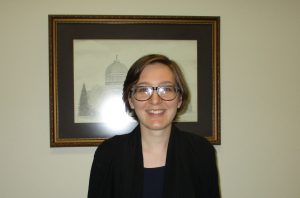 Ward has previously interned at the Daily Review and Rocket-Courier newspapers and recently returned from a trip to Beijing, China.

In the fall, she will pick up her studies in English at the University of Scranton where she has an internship in the school’s Public Relations department. She is the daughter of Terry and Diane Ward of Standing Stone.