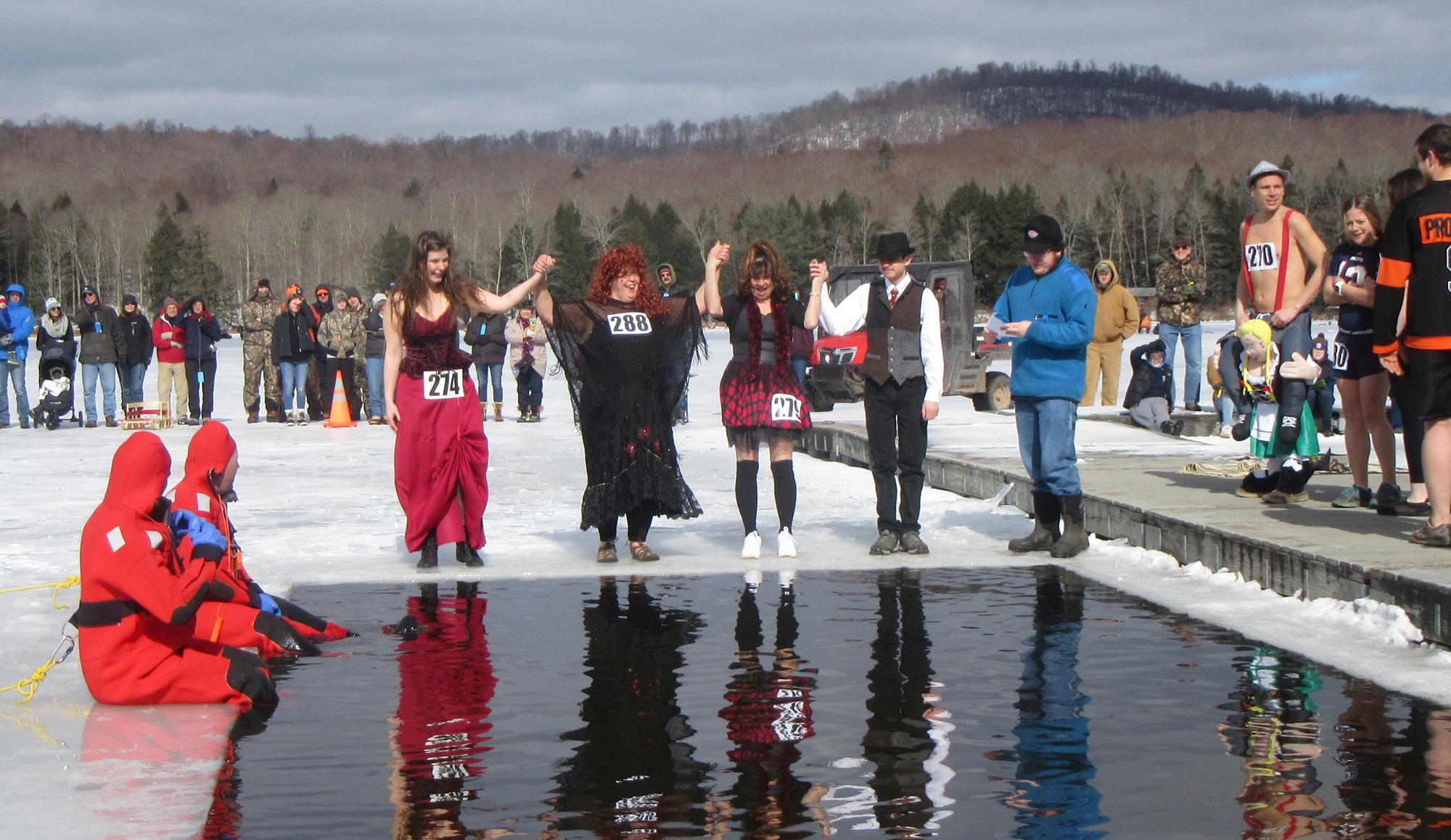 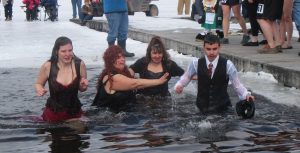 The first jumpers of the day (from left) Jennifer Higley, Cindi McCarty, Teresa Hart, and Christian Kirsch-Blatt rile up the crowd before their plunge (top) and help each other out of the water afterwards (above).

It was a crisp but mostly sunny day at Camp Brulé near Forksville in Sullivan County on Saturday, drawing nearly a thousand people to the historic Scout camp and Elk Lake for Winterfest. Shortly after noon, About 16 people wearing a variety of costumes paraded down the hill to the dock (below) before taking turns leaping into the frigid water to raise money for the Kiwanis of Sullivan County that supports children’s activities throughout the year. 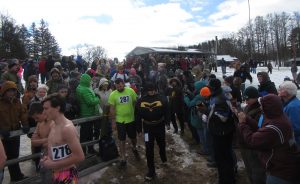 Winterfest is an evolving celebration that is dependent on the weather only so far as what activities can be conducted. This year, for example, the ice was thick enough for hundreds of people, including ice anglers vying for prizes, to be on the lake. But the grounds were a bit too icy, and snow was too sparse for the sled dogs in attendance to run. Ice blocks carefully cut from the lake to make room for the plungers was used to make a sledding luge (below) that shot kids out onto the lake. 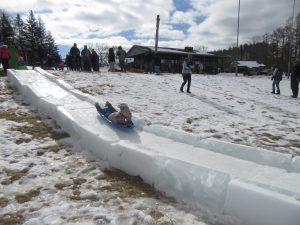 Ben Hatch served as emcee for the Polar Bear Plunge on Feb. 16, welcoming spectators, who were kept at a safe distance from the activity. Members of the Mildred Fire Department Dive and Rescue Team were poised to help anyone who needed assistance, but everybody did just fine. Plungers solicit pledges prior to the event and vie for valuable prizes. Only fifty dollars is needed to jump, but several participants each year raise a thousand dollars or more. 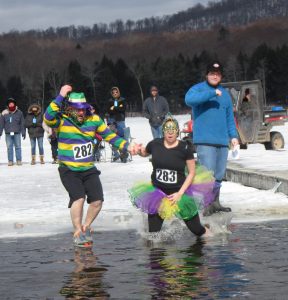 There are always first time jumpers, like Ryan and Lauren Rex (above) of North Wales near Philadelphia, but the plunge has become an annual tradition for others. Sisters Shelby and Brooke Pennella want to jump when they old enough, but their father, Dushore native Mark Pennella did take the plunge on Saturday. 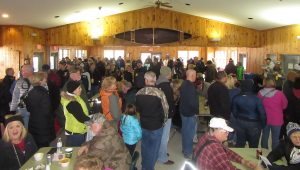 The main lodge (above) offered a respite from the cold and a warm place to eat, as Scouts from Whitpain, PA Troop 98 took orders and ran the registers while their parents and leaders prepared the food. Non-profits, local businesses, and conservation groups offered exhibits and sold a variety of wares. School-age volunteers for the Sullivan County County of the Arts provided face painting and helped young attendees make birdseed pine cones and dream catchers. Afternoon activities included a live auction and scavenger hunt.

Big winners of the day included plungers Robert Batdorf and Carol MacElhaney, who both won cruises. Ice fishers who won prizes included Myles Dimassino of Muncy with the Best Catch in the children’s division at four fish, including the biggest perch for a child at 12 inches. Shawn Bauman of Muncy brought up five pickerel to win the adult Best Catch award. Laurie Bauman caught the biggest fish in the children’s division when she reeled in a 21-inch pike, which was ties in the adult division with Charlie Kline’s pike of the same size.

Proceeds from Winterfest help the Kiwanis provide opportunities for youths in Sullivan County that they might not otherwise enjoys, such as local sports programs and bus trips to see Broadway shows. 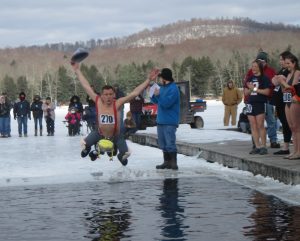 Kyle Knight appears as airborne as a skydiver with a jumper in tandem. 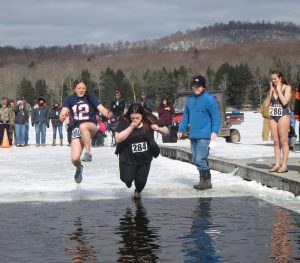 Madalyn Hubler (left) and Rebecca Evans jumped together but had different ideas about their landings. 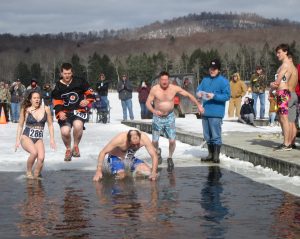 Jenny Long (left) reacts first to the icy waters as she takes the plunge with her friends. 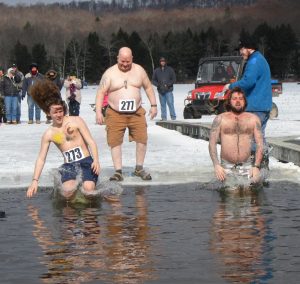 Ken Welch (center) was a little hesitant to take the plunge, but eventually joined his buddies. 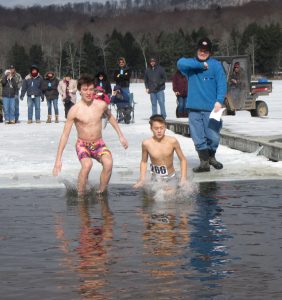 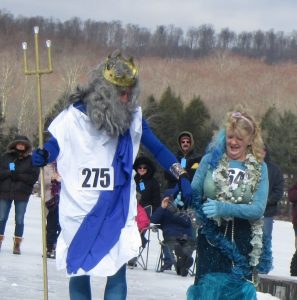 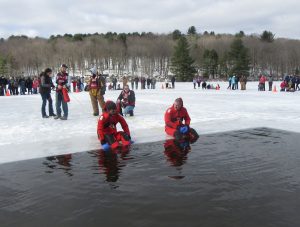 Mildred Fire Company Dive and Rescue Team members (seated, from left) Tyler Pedro and Brock Boyer, and (standing) Marcia Pedro, Nevin Nolte, Gary Hoover and Kody Wells were on hand in the event that any of the jumpers needed a rescue. 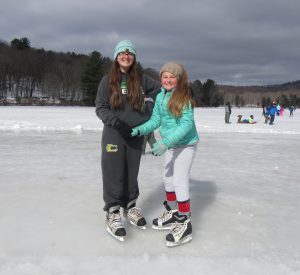 Shelby Pennella (left) helps her sister, Brooke to her feet on Elk Lake at Camp Brulé. Ice skating was one of many outdoor activities that were part of Winterfest. 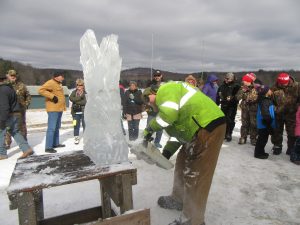 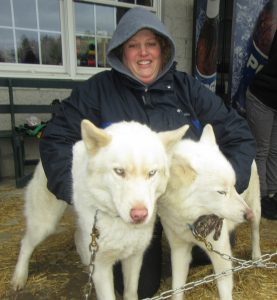 Conditions of the grounds at Camp Brulé did not allow for a dog sled demonstrations, but huskies brought to the event by Cindy Eddy of Ray-Cin Kennels were still popular with Winterfest patrons. 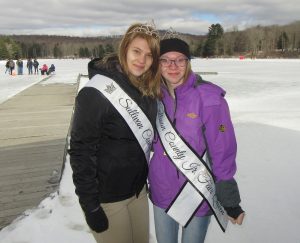 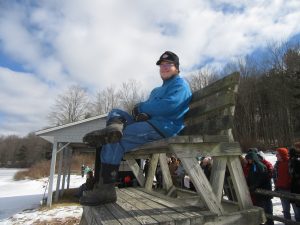 Ben Hatch returned as the emcee for this year’s Polar Bear Plunge. 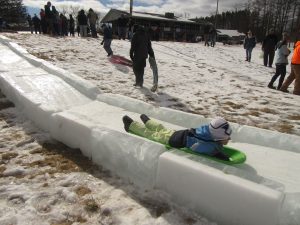 Careful engineering of blocks of ice removed from Elk Lake for the Polar Bear Plunge resulted in a luge for young sledders. 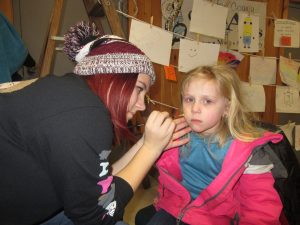 Sullivan County Council of the Arts volunteer Sam Skoranski considers what she will paint on Bella Fraser (seated) of Wyalusing.