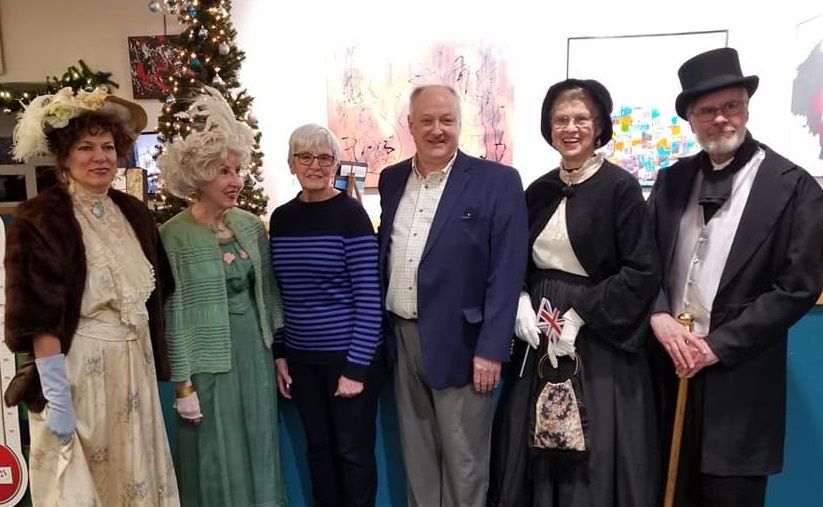 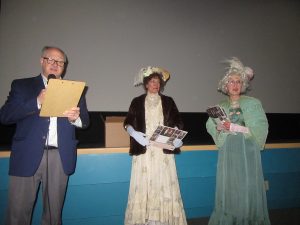 Ardent fans of the PBS series ‘Victoria’ (top, from left) Anne Berardelli, Margaret Messana, and (from right) Rich and Millie Ryczak joined Dietrich Theater cultural programs director Margie Young and WVIA senior vice president Chris Norton in welcoming audience members to a free screening of the first episode of the program’s third season on Sunday afternoon. Berardelli and Messana (above) assisted Norton in giving out some prizes after the movie.

Approximately 125 people attended a sneak preview screening of the first episode of a new season of ‘Victoria,” a Masterpiece Theatre production that airs locally on WVIA TV 44 on Sunday evenings. The presentation, which included a bag of popcorn, was free.

The Wyoming County Cultural Center and the local PBS affiliate have developed a meaningful relationship through the years, mostly by promoting each other. Sunday afternoon’s presentation, which was free to the public, was at least the second time that WVIA senior vice president Chris Norton participated as emcee and host.

“They want to do more partnering with us,” said Cultural Center cultural programs director Margie Young of WVIA’s recognition of the Dietrich as a cultural hub for Wyoming County and beyond. Prize winners hailed from as far away as Clarks Summit, Dimock and Kingston.

“It’s kind of a natural partnership, and there will be more in the future,” Young continued. “I think we have an audience through our film festival that really matches the WVIA and PBS programming.”

Free screenings will also be offered in Lewisburg and at the WVIA studios in Pittston this coming Saturday and Sunday, but, so far, reservations for the show at the Dietrich are the highest.

A number of attendees, including Anne Berardelli, Margaret Messana, and Rich and Millie Ryczak took it upon themselves to dress in period costumes, prompting other guests to wonder aloud if future screenings might be expanded into bigger, themed events.

“This is the first time around, so each time can get better,” said Young, who related that theater management and Norton were slated to meet on Monday to brainstorm on further collaborations.

As for the opportunity to view something on the big screen with full, rich audio that is generally seen at home on television, Young remarked, “It has a whole new element. You are much more aware of the details of the scenery and the costuming.”