Train Station Owners Work Toward Future While Retaining the Past 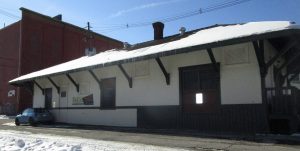 Two restored railroad stations at 1 and 2 Washington Street in Towanda are in full use and have secure futures in the Bradford County seat. But sections of old railroad track that jut out here and there and twist and turn through parts of the borough more than hint at the vibrant railroad industry that brought prosperity to the borough.

The larger of the two buildings faces the Susquehanna River, overlooking the Merrill Parkway, and currently serves as headquarters for the Bradford County Tourism Promotion Agency (BCTPA) and the chiropractic office of Dr. Ryan Napp. The smaller station faces Apple Tree Alley behind the Keystone Theatre and is the current home of Trowbridge & Co. Wealth Management Group.

Built by separate railroad companies in 1884 and 1922, respectively, both buildings served as passenger and freight stations during their heydays. Both also served as communication centers: 1 Washington Street containing a Western Union Office and 2 Washington serving as local headquarters for The Postal Telegraph Cable Co.

The primary train station was situated along the river bank north of the railroad bridge behind the current Global Tungsten & Powers facility and was known as Towanda Junction. From there, freight and passengers could be moved north and west to Elmira and Buffalo, NY; east to Scranton and New York City; and south to Dushore and Wilkes-Barre via various lines.

The primary railroad companies involved early on were the Susquehanna & New York (S&NY) and Lehigh Valley, the latter of which built the first bridge across the river to keep freight in motion when the canals would freeze in the winter. The Lehigh also built the 1884 freight station (below) as its headquarters before building a much larger rail yard in Sayre in subsequent years to connect to Erie Railroad, which ran from west to east across New York state’s southern tier. 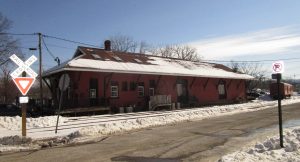 Bradford County was rich in natural resources that were needed elsewhere, and the railroads evolved at first to transport commodities such as lumber, coal, and hemlock bark to the canals. As investors gave up on the canals that were too costly to maintain, new railroad lines were laid to create a crosspatch of spurs that connected many small towns and villages that no longer exist.

The rail yard below Bridge Street at Towanda was a busy hub, even after the new yards were built at Sayre. The Barclay Railroad, which started as the PA&NY Railroad, ran through town there, south to Monroeton and on to Barclay Mountain and Laquin for the purpose of exporting hemlock bark for tanneries. When coal was discovered there, a conglomeration of leather tanning companies formed the S&NY Railroad and purchased the line as a division of the Lehigh.

“They had all of these divisions so, if they had to close one, it didn’t hurt the shareholders of the other lines,” said local railroad enthusiast Bob Frey, who worked that very line as a conductor when it was owned by Joe Zadrusky, Jr. of Scranton. The S&NY built the smaller station at 2 Washington Street in 1922 and maintained the track to Barclay until 1942, when they sold their interests and pulled up the rails beyond Monroeton along Schrader Creek.

Eventually, most of the bits and pieces of buildings, track, rolling stock and locomotives, including that owned the Lehigh Valley fell under the ownership of Conrail during a major merger in 1976.

Zadrusky bought the freight house from Conrail and subsequently sold it to purchase the six miles of track between Towanda and Monroeton, calling it the Towanda Monroeton Shippers Lifeline. It’s sole purpose was to service Scaffer’s Feed Company. Zadrusky also purchased several cars, a locomotive and a caboose at a Conrail auction that were used in creative ways along the stretch. Before he retired in 2009, he sold the line to Reading & Blue Mountain Northern Railroad, which still maintains it, and the baggage cars adjacent to the 1884 freight station to Bradford County.

The BCTPA purchased the big station in 2017 from Dr. Napp and initially embarked on some cosmetic renovations as its office was relocated there from the Progress Authority building. According to BCTPA executive director Robin Cummings, the tourism agency was looking for a building with a well-known history that was at the center of the county and publicly accessible. 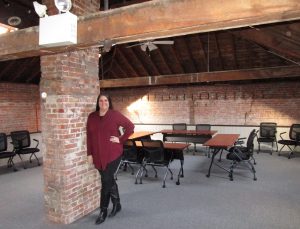 “It kind of hit on all cylinders for us,” Cummings (above, in the upstairs conference room) remarked. “We love it here. We’re glad to be between Main Street and the river.” She has a professional companion in her suite in Amy Brennan of Custom Geekery, a website design and social media management company with an office on the second floor.

Bigger projects that have been completed as capitol improvements include restoration of the conductor statue, a new HVAC system, and repairs to the fascia and rain gutters. “These are old buildings, and they need to be taken care of,” said Cummings. “We want to keep the integrity of this building for many years to come.”

Trowbridge & Co. purchased the smaller station in 2019, after renting the space for a number of years. It had previously served as an art studio, tax prep office, and a travel agency. The wealth management business was fairly new, and owner/manager Tari Trowbridge (below, right, with client relationship manager Abby Borel) wanted to be sure that both Towanda and the building were the right fit. 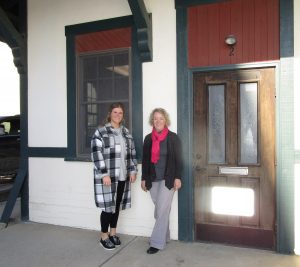 “After four and a half years, I felt confident that it was.” Trowbridge related. “I was attracted to the space because of its unique character. The train station gives us something to start a conversation with.” Tari’s husband, Thor Trowbridge, oversaw simple interior renovations that included putting up a faux tin tile ceiling that immediately grabs one’s attention upon entering.

The first floor of the 1884 station retains most of its original brick walls and wooden beams. The upstairs has been renovated into a spacious conference room that is available for meetings and seminars. Both floors afford visitors an open view of the Susquehanna River. In addition to people taking walks along the Merrill Parkway and kayakers floating by, Cummings said, “It’s not uncommon to look out and see a bald eagle in one of the trees.”

Both new station owners are satisfied with their new, historic digs and insist that they are in for the long haul. The Trowbridges are planning an upgrade for the outside of their station this summer that will keep the style intact. They also plan to put on a metal roof that matches the bigger station.

“I don’t plan to move my office again. It’s very convenient and economical in terms of taxes, insurance and heating/cooling,” Tari stated. “I love all of the windows and the light that comes in, as well as access to the river.”

“Our hope is to have the deck be a more inviting location for lunches or maybe even acoustic music and wine tasting,” Cummings offered. “With the addition of some picnic tables, we can provide some space for people to read or just look at the river.”

With an eye on the future while also preserving the past, the BCTPA board has worked for the past two years on the design and acquisition of grants to apply a mural to the full length of the baggage car, facing the river. The project represents a partnership between the tourism agency and the Bradford County Regional Arts Council, which is headquartered in the neighboring Keystone Theatre. 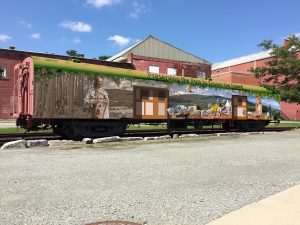 The mural should be installed in the spring or summer of this year, and Cummings suggested that it could be the catalyst for an anniversary celebration that had to be postponed due to the pandemic. 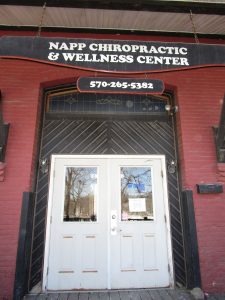 The Merrill Parkway entrance to Dr. Ryan Napp’s offices in the 1884 freight station. 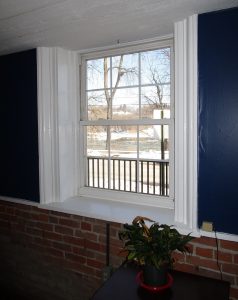 Those inside the 1884 station are afforded beautiful views of the Susquehanna River at any time of the year.