By: Rick Hiduk
In: Second Chances
With: 0 Comments 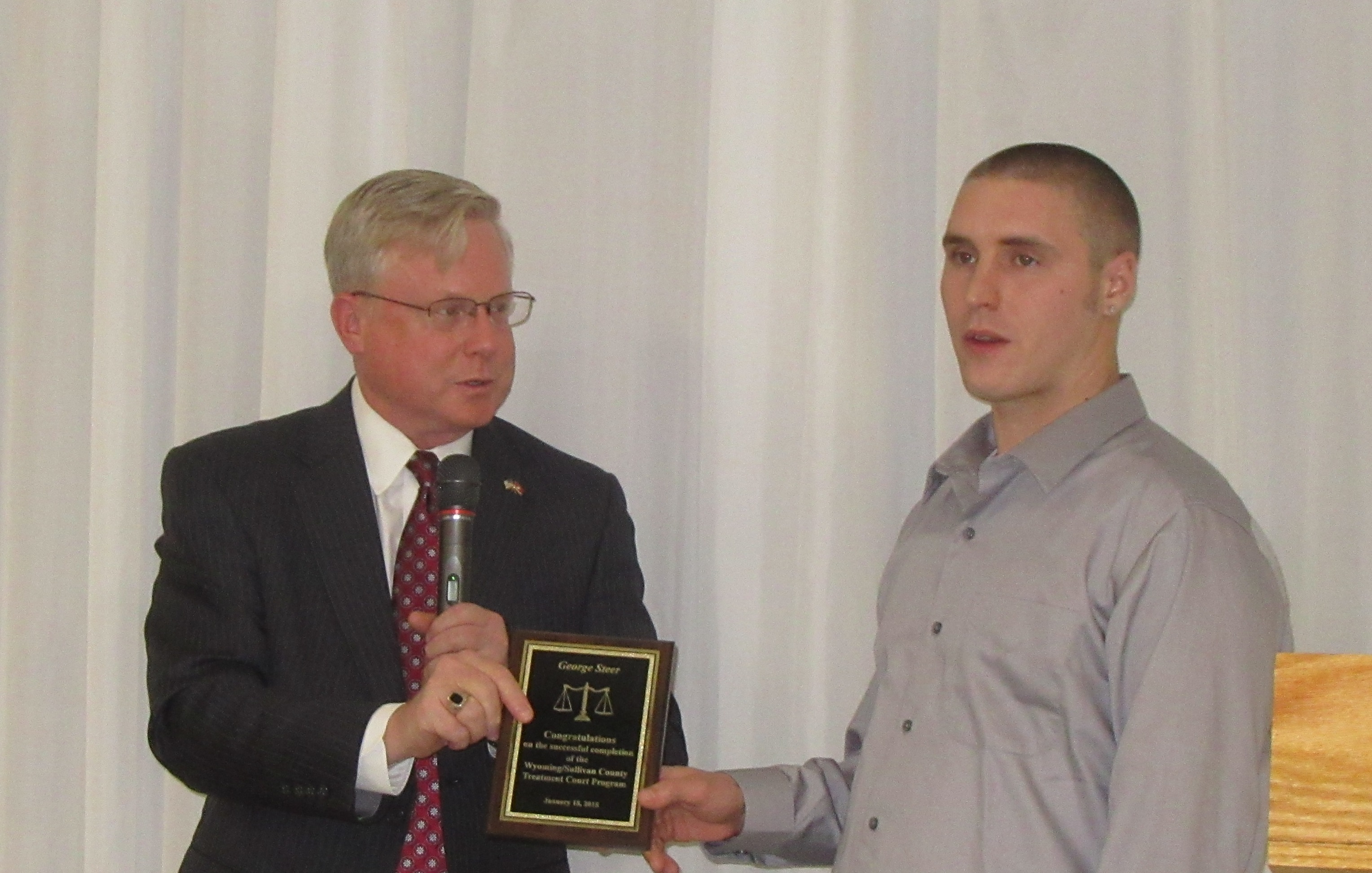 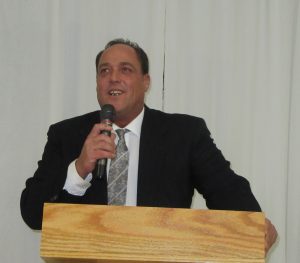 George Steer (top, right) was the first of eight graduates to receive a plaque from Wyoming County President Judge Russell Shurtleff at the Wyoming/Sullivan Counties Treatment Court banquet on Jan. 18. Graduate Sean Corrigan (above) said the best part of the Treatment Court celebration on Jan. 18 was having so many family members in attendance to support him.

(As published in the Jan. 25 edition of the Rocket-Courier)

“Don’t roll the dice, and you won’t get into trouble again.”

Such was one of the pearls of wisdom shared by Ken Montrose, keynote speaker at the Wyoming/Sullivan Counties Treatment Court (WSTC) graduation ceremony held on Jan. 18 at the Triton House Company. Eight graduates were among 180 guests in attendance at the event, which provided ample opportunity for both heart-wrenching and heartwarming stories depicting despair-to-hope scenarios. 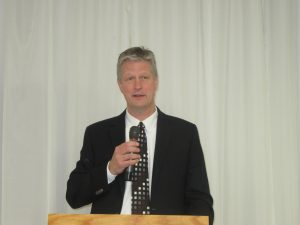 Montrose (above) is the director of training and publications for Greenbriar Treatment Center in Pittsburgh. He is a recovering alcoholic whom Treatment Court Judge Russell Shurtleff had been trying to bring in as a speaker for a number of years. Though Montrose injected a considerable amount of humor into his presentation, his base message could not have been more serious.

“One of the reasons I’m still sober is that I don’t want to go through that first year again,” Montrose said of the initial period of probation, counseling and treatment he incurred after crashing into a sheriff’s vehicle and being arrested for DUI. “I rolled the dice that night,” he stated. He repeatedly promised recent graduates, whose journeys are in their relative infancy, “It keeps getting better.”

Montrose reached out to all people suffering from substance abuse disorders with preemptive advice. “Don’t wait for milestones,” he cautioned, offering as examples, “I’ll quit when I go to college, when I graduate from college, when I get married, when I have children. There will always be another reason to reason to wait.”

The audience for the annual program was made up of Treatment Court graduates and alumni, family members and friends, police and probation officers, and representatives from the judicial and elected branches of county and state government. Rep. Karen Boback was in attendance, as was Sen. Lisa Baker (below), who offered salutations and further encouragement to the graduates. 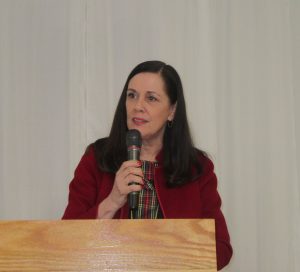 “When we combine reason and resolve, we find redemption,” she stated, crediting the Treatment Court program for casting a spotlight on a “better way to avoid tragedy, lengthy incarceration, or death.”

In addition to letting the public know about Treatment Court, Sandy Vieczorek related, the event serves as a celebration to each perosn who completes the rigorous and demanding program. 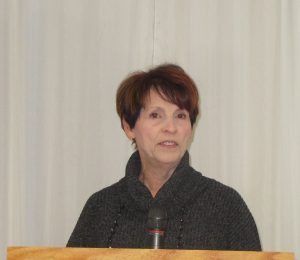 “You are no different than any one else who has a disease that needs treatment. People need to realize that recovery works.” said Vieczorek (above), who spearheaded the creation of the dual-county treatment court in memory of her son, Randy, whom she lost to a heroin overdose.

The banquet and graduation ceremony was facilitated by Judge Shurtleff, who noted that the Wyoming/Sullivan County program has become a role model for other counties. In the ten years that the program here has been helping non-violent offenders rise above the bad habits that landed them in jail, the number of treatment courts in the state has risen from 24 to 110.

One by one, the graduates, who represented a variety of backgrounds and age groups came forward with a friend or family member who spoke on their behalves. Some shared initial doubts that the person they used to know would ever make it through the program, but each also acknowledged that the graduates had “evolved” and “grown” into respectable, productive members of society.

Graduate George Steer echoed that sentiment, noting that the program had given him structure. The alternative, he explained, would have been a stint in state prison and “letting the same person back out.”

Joshua Robbins (above) said that the program had restored his belief in himself and given him new ways to deal with life’s ups and downs. He got a laugh from the crowd when he admitted that Treatment Court member and Sullivan County President Judge Jennifer Vandine was the only woman who had ever “scared the crap” out of him, adding, “I don’t ever want to see that again.” 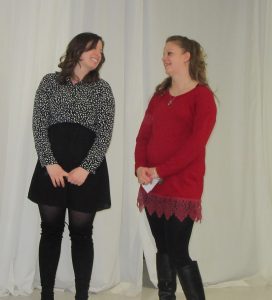 Alicia, guest speaker for graduate Melissa Kuns, described the experience of helping her friend through the program as mutually therapeutic. “She’s taught me more about myself than she knows,” Alicia (above, left) remarked. “She’s shown me how to smile through the pain.” Kuns (above, right) related that she was arrested on her mother’s 50th birthday and found out the same evening that her grandfather was dying of cancer. He passed away while she was in jail.

In addition to obtaining GEDs, trust from their friends, new career paths, and custody of their children, the graduates stories carried several common themes. As Brandy O’Rourke put it, the support and words of encouragement she received from the professionals who make up the Treatment Court pulled her out of her “cycle of self-pity, hopelessness, and despair” and created a “beautiful ripple effect” that helped her to encourage others.

Some of the most poignant moments of the event were related to a soul-bearing, non-scripted speech by graduate Jacob Sick’s father, who sadly admitted that Jacob had followed in his footsteps when it came to abusing alcohol.

Despite having been in recovery since Jacob was eight years old, his father (below, left) related, no amount of preaching on his part nor nagging by Jacob’s mother could prevent what he felt was destined to happen. 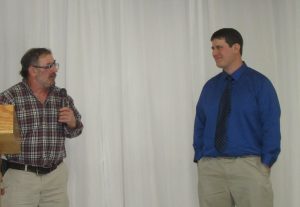 Jacob (above, right) agreed, recounting the morning that he woke up in a jail cell with little recollection of how he got there. If not for the program, Jacob’s father insisted, his son would be no better off. Jacob regretted that his family had to suffer along with him but was was happy to report that he had overcome a number of “character defects,” including a previous aversion to public speaking.

The Wyoming/Sullivan Counties Treatment Court started in 2007 and has enrolled 147 sentenced participants, just more than half of whom make it to the graduation. Participants have performed nearly 18,000 hours of community service, calculated as a $129,766 value to the county. Five years ago, WSTC became only the second such program in the Pennsylvania to receive state accreditation. 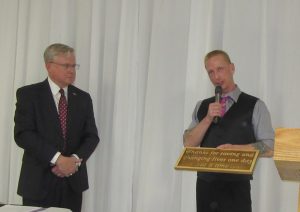 Graduate Joshua Robbins (right) was so inspired by the Treatment Court program that he created a plaque that he presented to Judge Shurtleff. 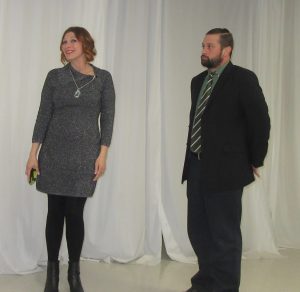 Brandy O’Rourke’s brother James (right) said that his love for his sister was unwavering, regardless of where she was in her recovery progress, which he said has made her “ever wiser and more prepared for life.” 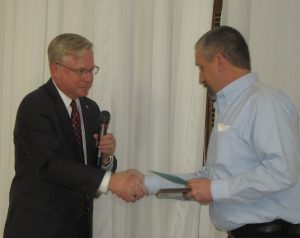 Judge Shurtleff (left) congratulated graduate Wayne Burgess for not only completing the Treatment Court program but developing a new business plan for himself in the process. 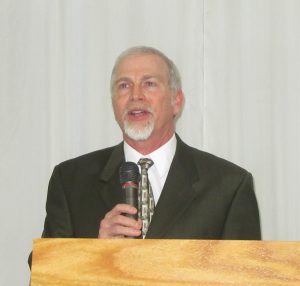 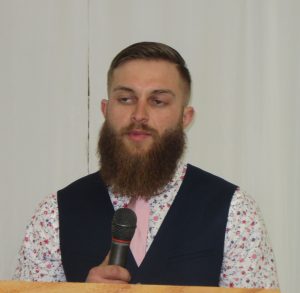