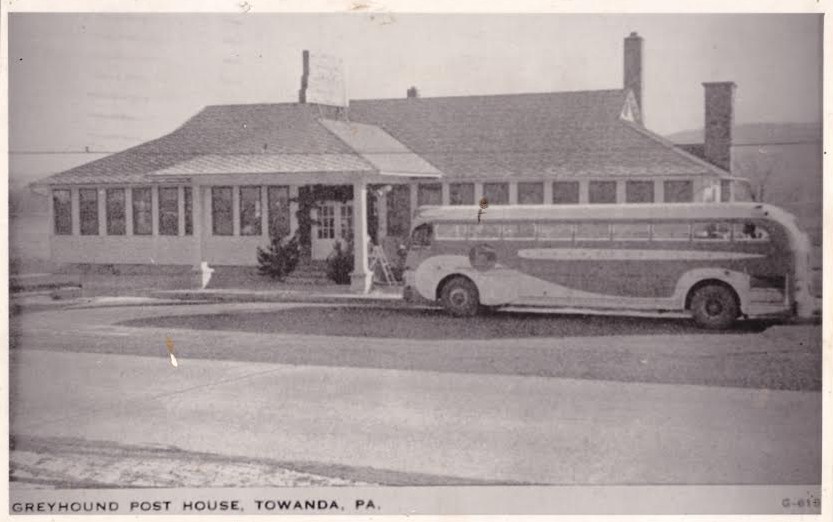 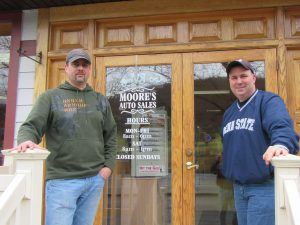 Kevin Chamberlin (above, left) and Vince Arena agree that they learned most of what they know about the car and camper business from previous Moore’s Auto & RV Sales owners Willy and Steve Moore. They strive to maintain a customer base that reaches back several generations by providing personalized service and stocking top-of-the-line campers and quality pre-owned vehicles. Their property was once home to The Post House (top) and served as a Greyhound Bus station.

On January 1, 2015, former Moore’s Auto & RV Sales coworkers Vince Arena and Kevin Chamberlin purchased the business run by Steve Moore and his father Willy Moore in Wysox Township since 1962. Steve stayed through July of that year to facilitate a seamless transition before retiring to Boise, Idaho with his wife, Carrie.

Arena and Chamberlin formed a partnership but elected to keep the name of the business. Steve Moore and his family had made such a strong impression on the younger men that they didn’t feel the need to make many changes at all in what has been a successful business for more than half a century.

Simply put, “The Moore’s way of doing business worked,” Vince explained in a February 2016 interview. He has now been with the company for about 21 years and continues in his role as Sales Manager. Kevin is in his 15th year there and runs the parts and service departments. 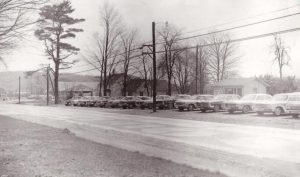 Willy Moore started the business in 1962 at the present location of Snell’s Auto Sales farther east on Route 6 (above). In about 1972, he moved Moore’s Auto Sales to its current location at 624 Golden Mile Road, and his son, Steve, joined him, leaving his job as manager of the A&W Drive-In Restaurant.

As is common at long-running businesses, photos of the building and the property as it appeared more than 50 years ago, as well as newspaper articles marking various milestones, hang framed on the office walls. Various businesses had occupied the site previous to Willy’s purchase of the property from Harvey Werts of Wyalusing.

The building was most-widely known as the Post House (above). It served as a Greyhound bus terminal from at least the 1940s into the 1960s and also a restaurant, bar, and teen hang-out with several bowling lanes.* A menu from 1943 (below) is also part of the collection. 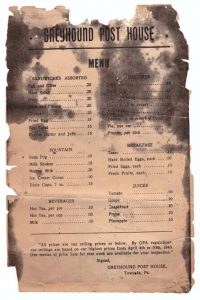 The business became one of many car dealerships that characterizes the Golden Mile and Wysox Township to this day. Vince and Kevin were two of many sales associates and mechanics who moved up and down the street over the years, from one dealership to another.

Vince credits insurance mogul Max Gannon for steering him toward the car business after complimenting him on his skills as a waiter at the Keystone Inn in Sayre. Gannon introduced Vince to Pat McGuire at the Ferrario dealership, and he began his career as a car salesman. After about a year and a half of selling new and used cars there, Vince was hired by Jim Smith at Williams Auto, where he worked for two years.

Kevin also worked at Randy Williams’ car dealership, when Williams moved the former McCarty’s Auto Sales from Wyalusing to the Golden Mile. Kevin had previously worked at McCarty’s during his summers home from studying to be an auto mechanic at Penn Tech in Williamsport. He also worked for two years at the Sherwood dealership in Tunkhannock.

Moore’s Auto Sales, focused primarily on used cars and campers at the time, and the Moores themselves had built solid reputations on the strip for their integrity.

“Any time you ever bought anything from those guys, they stood behind you,” Kevin remarked. “People got to know that over the years.”

“Moore’s had such a good reputation because they provided such great customer service,” Vince concurred. He made the move to Moore’s about six years prior to Kevin.

One of Vince’s friends was interested in a car on the Moore’s lot, so Vince went over to take a look at it. “Steve offered me a job, and I’ve been here ever since,” Vince related.

“I started doing a lot of work over here on their cars,” said Kevin of his hiring. “They decided that they wanted open and operate a garage and asked me to come to work for them.”

Willy Moore was still working with Steve when the young men came on board. Vince noted that his work ethic was undeniable.

The family-owned business attracted buyers representing generations of area families. Vince and Kevin were treated like family, which they never took for granted. Steve Moore told a Rocket-Courier reporter in 2015 that customers often assumed that he and Vince were brothers or father and son.

The addition of RVs to the lot in 2005 was one of the biggest changes in the history of the business. According to Vince, it was really a twist of fate.

“A long-time customer who retired decided that he wanted to travel. He bought an RV (elsewhere) and he and his wife went on one 500-mile trip,” Vince related. The trip apparently didn’t go well. “They said ‘never again’ and wanted to trade it in.”

Vince admits that neither he nor Steve knew much about the value of large campers or RVs. “We took a stab in the dark and took the trade-in,” he explained. “I think we sold it in two days.”

RVs were suddenly a hot commodity for retirees, many of whom had been shopping at Moore’s already for decades. “A lot of old car customers became camper customers,” said Vince.

The dealership bought five more RVs, then 10, then 30. “We were selling them as fast as we could bring them in,” Vince remembered. The second year, Moore’s brought more than 30 RVs out of winter storage and sold 27 within the first month of spring.

While RVs continue to be strong sellers at Moore’s, their sales reached a peak at the height of the natural gas industry from 2011 to 2013. Moore’s sold 150 RVs to one company alone, the campers being disbursed among employees working out of nine satellite offices across the nation. “Our campers have gone across the country, “ Vince says proudly.

As the stock at the dealership evolved, so did technology and the challenge of keeping up with it, noted Kevin, who oversees the servicing of both cars and campers.

“Everything on a car is electronic any more,” he remarked. “It has definitely changed the way we go about repairing them. You need more background on the electrical side of things.”

Technology has also changed the way in which vehicles are purchased for the lot. Even prior to Steve Moore’s retirement, there were fewer trips to the Manheim Auto Auction in Lancaster County and more time spent in front of the computer bidding on cars and trucks via online auctions reserved for registered dealers.

Just like the vehicles purchased off lots in Manheim or elsewhere, cars and trucks purchased online are guaranteed by the banking company that backs the sale. If anything does not match the detailed report associated with the vehicle, the seller is responsible for reimbursement of purchase price and fees.

Out of hundreds of vehicles Vince has bought online, however, only one was not exactly as it was reported. “It was supposed to have heated seats, which my customer wanted,” he related. “We let them know, and they installed new heated seats for us.”

When the number of gas workers in the area began to drop, Moore’s simply began bringing more cars up front again. “When the gas industry was here, we were selling RVs year round,” said Vince. “Now, it’s more seasonal again.”

Though Moore’s Auto Service division takes care of all makes of vehicles, regardless of whether or not they were purchased there. Kevin remembers that, early on, it was challenging to get people to realize that. While there’s still plenty of room for growth in that department, he’s happy to report an increasing number of service-only customers.

Vince says that he prefers to buy more GM and Chrysler vehicles. “I stick with what I know will sell,” he stated. “And, over the years, you learn what gives you the least headaches.”

It surprises some, he continued, that Moore’s still stocks a lot of sedans. The dealership’s older customers, he maintains, still prefer cars over SUVs.

Despite his retirement from the car business, Steve Moore is still involved in commerce in the Wysox area, sitting on several boards. Vince and Kevin look forward to his routine visits. Steve, they explain, is still their mentor. He and Willy still serve as inspirations and examples as to how to maintain personal and professional relationships with customers and keep them coming back.

“Steve’s father always used to tell me, ‘You don’t want to go into a grocery store and have to hide from a customer,’” said Vince.

Vince Arena is the son of Vincenzo and Judy Arena, his father immigrating to the US from Italy 60 years ago and his mother coming from East Smithfield in Bradford County. Vince graduated from Sayre High School and has been married to Christine for 21 years. They have two children: Lauren 16 and Dominic 11.

Kevin Chamberlin is the son of Butch and Marlene Chamberlin of Wyalusing and a graduate of Wyalusing Valley High School. Kevin and wife, Heidi, have two daughters: Hanah 15 and Karley 10. 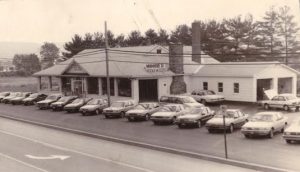 Posting of a photo of the Greyhound bus parked in front of the old Post House building on a Bradford County Facebook page brought a flood of memories from area residents. A synopsis of their comments follows:

“When we took the Greyhound from Troy during World War II, we stopped there,” Virginia Shapiro recalled. “Oh, those buses were smoky. I got headaches and nausea.”

“I remember waiting for the Greyhound bus,” Eulie Allen Costello related. “Someone was arriving from Tennessee.”

“In the mid 1950s, it was a restaurant run by Gene Johnson and his wife,” Betty Miller Johnson remembered. “She made homemade hamburger buns that were great, along with other food. My late husband and I ate their often when we were dating. Prior to that, it was closed for a while.”

“It was a very good restaurant in its days,” Dee Reeves concurred. “My mother worked there.” Her mother, then Dianna Lamphere, worked at the Post House to help support her siblings when her father grew ill, Reeves added.

“My mother-in-law has lots of stories from her days as a waitress at the Post House,” Connie Brown stated. Many people also shared memories of enjoying meals there.

“I can remember going to the restaurant with my Mom,” noted Nancy Swartwood. “I think of her every time I pass this building.”

The 1960s brought a lot of change to the Golden Mile, including at the Post House.

“Harvey Wertz purchased it in 1964, remodeled some on the inside and opened it as Dance Land with live bands on Friday and Saturday nights,” Dennis Strope remarked. “Our band played there quite a few times.”

“I put my feet to the floor more than once in that place,” Bill Owen replied to Strope, who was a member of the NoahCounts.

“I remember playing in a country band, and we went there once to rehearse for a show in one of their rooms,” related Margie Mathers.

Maggie Miller noted that it was still called Dance Land when she was a teen, but Brian Keiper remembers the establishment as The Den in about 1971, which would have been just before the Moore’s moved their auto dealership there.