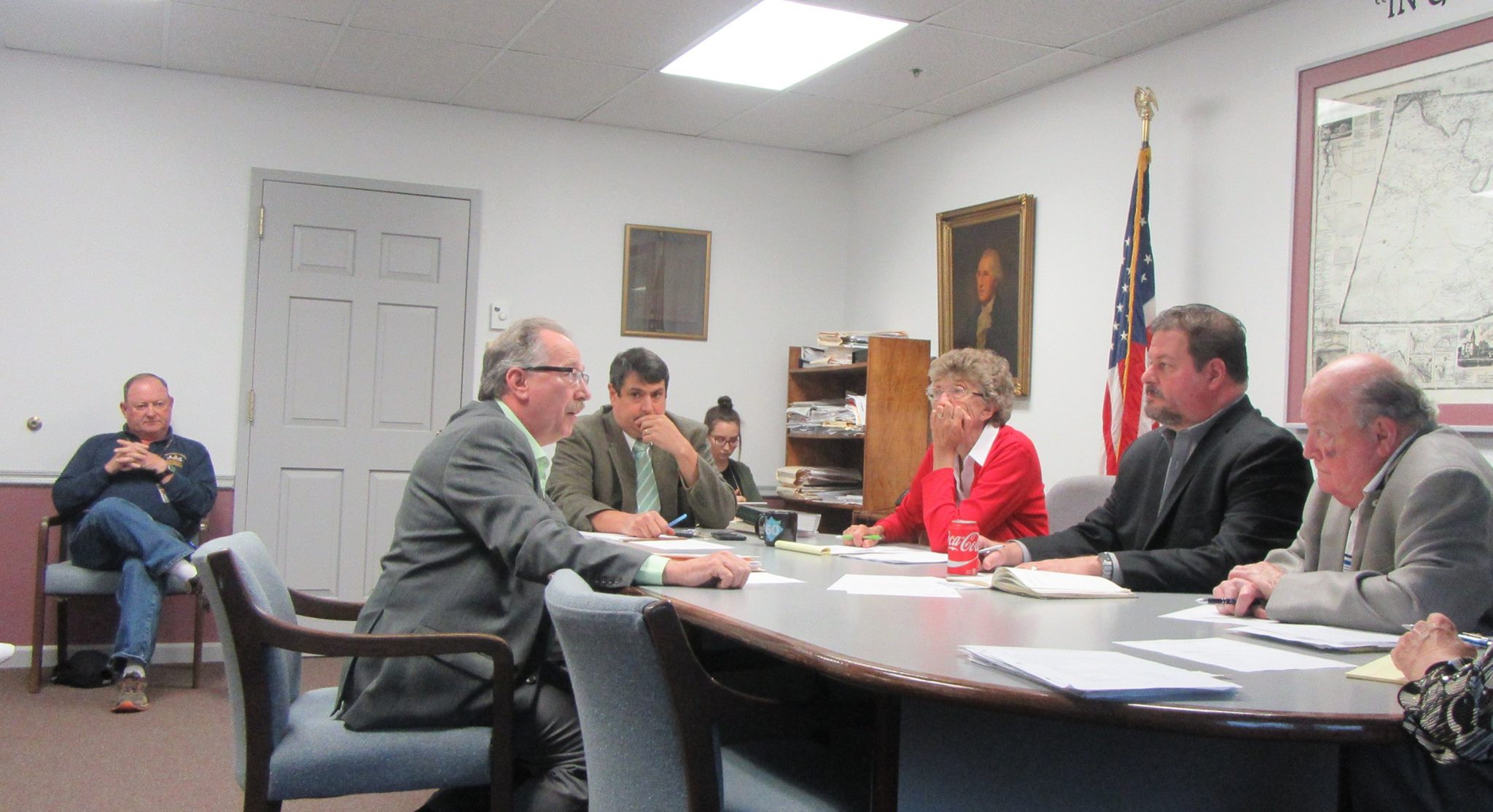 Wyoming County Human Services Director Mike Donahue (above, second from left) addresses the county commissioners at their regular public meeting on Tuesday morning. In the short time that he has been employed by the county, Donahue has managed to secure “block grant” status for the county, which should allow for more efficient use of available funding.

For the first time in several months, those filling the seats in the board room of the Wyoming County Commissioners came with a vast array of news and needs, ranging from flood mitigation projects, grave plot purchases and the plight of dairy farmers to electronics recycling, intern protocol and human services. The most uplifting report of the day came from county Human Services Director Mike Donahue.

Donahue was hired from Luzerne County in January to consolidate a variety of departments and initiatives that fall under the human services umbrella, including mental health, drug treatment, housing, and programs for persons with intellectual disabilities. Those services have long been shared with Luzerne County, and complaints from social workers and recipients of such services that Wyoming County was getting the short end of the stick were rampant.

Donahue related that he submitted a letter of intent in February for Wyoming County to become a “human services block grant county” for the fiscal year 2017-18. His application was accepted, pending receipt of a budget statement by July 10. In short, approximately $1.4 million that use to be part of a shared pot will now come directly to Wyoming County and be used at the county’s discretion.

Wyoming County will continue to work with Luzerne County, Donahue explained, “but we will manage the money for these services, look at existing services, and expand them based on our county’s needs. Our substance abuse situation is not getting better, and our mental health services must be around the clock.”

In the process of application, Donahue was also able to reduce the county’s required match by $35,000, which increased the amount of the block grant.

Lifelong dairy farmer and manager of the Progressive Agriculture Organization, Arden Tewksbury (below, left, with Falls dairy farmer Annette Kuzma), asked the commissioners for a letter of support to USDA/AMS/Dairy Program Deputy Administrator Dana Coale that would be included with a petition by dairy organizations and area business leaders. Dairy supporters are asking the USDA to convene a national hearing to change the current pricing formula that he says cheats dairy farmers and harms the economy. 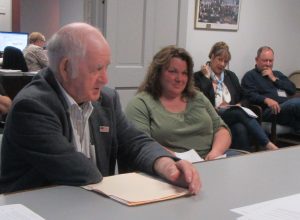 Comparing the $15.38 per hundredweight average currently assumed for milk production to the $22 per hundredweight figure released in 2016 by the Economic Research Service, Tewksbury maintains that the average dairy farmer lost $262,000 last year.

“We recognize that our dairy farmers and business people in our area are suffering needlessly,” Tewksbury’s prepared statement read. “We can no longer stand by and watch this destruction to our rural economy. Even our tax base in our rural areas is being adversely affected by what is happening to our dairy farmers.” Nationally, Tewksbury estimates the loss to rural economies at $75 billion.

Since the 2011 floods, the PA Department of Environmental Protection (DEP) has taken a more active role in ensuring that dams across the state are capable of holding back water levels comparable to a 100-year rain event. Two in Windham Township – at Chamberlain Pond and at Negro Pond – have fallen under scrutiny. If they cannot be repaired or brought up to new codes, they must be breached.

Engineer Nate Tompkins and Frank Yun III, one of more than 20 homeowners on Negro Pond, informed the commissioners that an application has already been submitted for the dam at Chamberlain Pond, which is situated east and lower than Negro Pond. Both feed Little Mehoopany Creek. The work needed at Negro Pond will not be as large in scope as the total rebuild required by DEP for the lower pond, the cost for which will run close to $500,000.

For approximately $200,000, Tompkins hopes to oversee an increase in dam height by two feet at Negro Pond and the installation of a draw-down pipe, which should allow for a measured decrease in water levels in the event of a crisis. The flood mitigation grant applications require county support, which the commissioners approved unanimously. 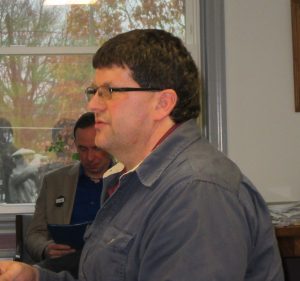 “It was the first time in the 10 years that we’ve done it, that I had to go out (onto Route 92) and direct traffic,” Rogers remarked, noting that 11.19 tons of equipment was brought to the center in Tunkhannock Township by 163 people.

The next electronics recycling event is scheduled for Saturday, Sept. 9.

Mead Steps Away from Buyout Discussions

Reasserting that the county commissioners had no control over the decision by the state to grant $2.45 million to homeowners in Meshoppen borough for buyouts of flood-prone properties, Commissioner Judy Mead announced this morning that she will recuse herself from any further course of action the county may take concerning the buyouts.

“My son does own a house in the location that was chosen,” Mead stated. “I will be abstaining from any discussion or voting on the issue.”

Mead’s decision was personal and not legally required, according to county solicitor, Atty. Paul Litwin.

Forkston Township resident Lizz Dewolf has contended that Mead’s son, Chas, and developer Steve Borel have conflicts of interest, in that Chas is a county employee and Borel does business with the county and has purchased HUD properties. Dewolf distributed copies of an email from DCED director Donna Enrico dated May 17 that acknowledges concerns about potential conflict of interest and indicates that both the county and PEMA officials have been made aware of the concerns.

The commissioners denied any communication with Enrico relative to the buyouts since their May 16 meeting when they figuratively closed the door on the matter. (Read about it here: http://www.endlessmtnlifestyles.com/?p=7501)

County EMA director Gene Dziak and Atty. Litwin agreed that it is up to the legal departments at PEMA and DCED to determine if a conflict of interest exists and put that case to the county. In such an instance, Litwin added, Commissioner Mead could request an exemption and resume discussion and voting on the matter.

Litwin would not entertain any additional questions posed by Dewolf.

The commissioners were excited to introduce new intern, Samantha Seidel (below) to the press and others in attendance. Seidel is studying political science at Mansfield University and just recently made her appearance at the courthouse in Tunkhannock. She resides in Mill City and is the daughter of Lynn Carpenter-Minicozzi and William Seidel. 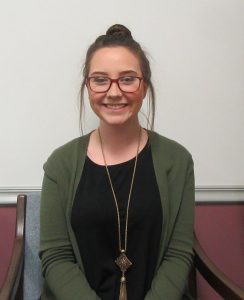 Commissioner Ron Williams related that he would be taking Samantha on a tour of the courthouse today to get to know those in various departments.

“Over the summer, we’re hoping to give her the opportunity to work with many different offices in the courthouse,” Commissioner Tom Henry remarked.

Atty. Litwin inquired of Seidel’s intern status – specifically whether she was considered a volunteer or an employee.

“You can have unpaid interns,” Litwin related. “But you have to follow the rules.” He is familiar with the issue because there are currently several interns involved with the county’s probation department, and there are a number of tasks that they are not permitted to perform as volunteers.

Litwin recommended putting Leidel on the payroll as a part-time employee at minimum wage and therefor make her eligible for workman’s comp and mitigate any chances of a lawsuit.

The commissioners seemed surprised by the complications posed by Litwin and said that they’d have to look into it, as it could present a budget issue. Williams was surprised to learn that the probation department has as many as five interns. Henry said that he doesn’t believe that they are active simultaneously.

Narcan Supplies to Be Replenished

Dziak reported that the county’s supply of Narcan, a lifesaving nasal spray administered to those suffering from opiate overdoses, is running low since the initial batch arrived in November 2016, and there is a need to restock a number of offices and emergency vehicles.

“I don’t want to run dangerously low,” Dziak said, noting that the antidote only has a two-year shelf life. He would like to maintain at least two units per vehicle and suggested that 18 new units be ordered.

Henry expressed frustration at a substantial increase in cost for Narcan since last year from $48 to $68 per dose.

Under the category of written communication, Henry read a letter dated May 25 from Northmoreland Fire Chief Chuck Story concerning perceived communication deficiencies in the wake of a fire at which unexpected and unknown chemicals became involved.

The May 19 fire in North Moreland Township occurred on a private property from which a tree service business is conducted. The chemicals were later determined to be pesticides, according to Dziak.

In his letter, Story described a flow of aqua colored chemicals that became obvious once they were hit by water. Since they could not be immediately identified, firefighters were ordered to evacuate the area, abandon their vehicle, and close down the roadway to eliminate access to the area. Nearby residents were warned to shelter in place.

The situation eventually involved personnel and apparatus from Wyoming, Lackawanna, and Luzerne counties, including medical support and those trained in decontamination. Units from as far away as Clarks Summit and Kingston were called because there were other calls in process in the region.

The only reported injury was that of a resident trying to extinguish the blaze before firefighters arrived on the scene who received second degree burns to his arms and legs. Story thanked Wyoming County EMA and 911 and the other agencies that were involved in the incident for their professionalism.

Nonetheless, upon in-house analysis of the situation, company officers felt that they were in need of additional resources at the command post, a more identifiable management plan, and a need to update alarm responses to involve more units more quickly.

Commissioner Williams followed up Henry’s reading of the letter by saying that the communications issues are being addressed.

County Out of Grave Sites

Occasionally, the county finds itself in the situation of needing to provide a suitable burial for an unknown or unclaimed individual. While it doesn’t happen often – maybe 12 times in the past 20 to 30 years – it did happen within the last week, and county officials realized that they did not have any plots available.

When they looked into the availability of plots and prices, they were surprised to find that the costs were higher than what the county code allows. For instance, there is a $350 limit on the burial itself, and burials today cost much more than that.

“With the increases in overdoses, I’m afraid that it could happen more often,” Henry said of the need for the county to have burial sites in reserve.

Atty. Litwin said that the county could still purchase some plots, and look for ways to revise the codes in the meantime. The motion was tabled for further discussion, and Henry disclosed that someone did come finally forward and claim the body in question.