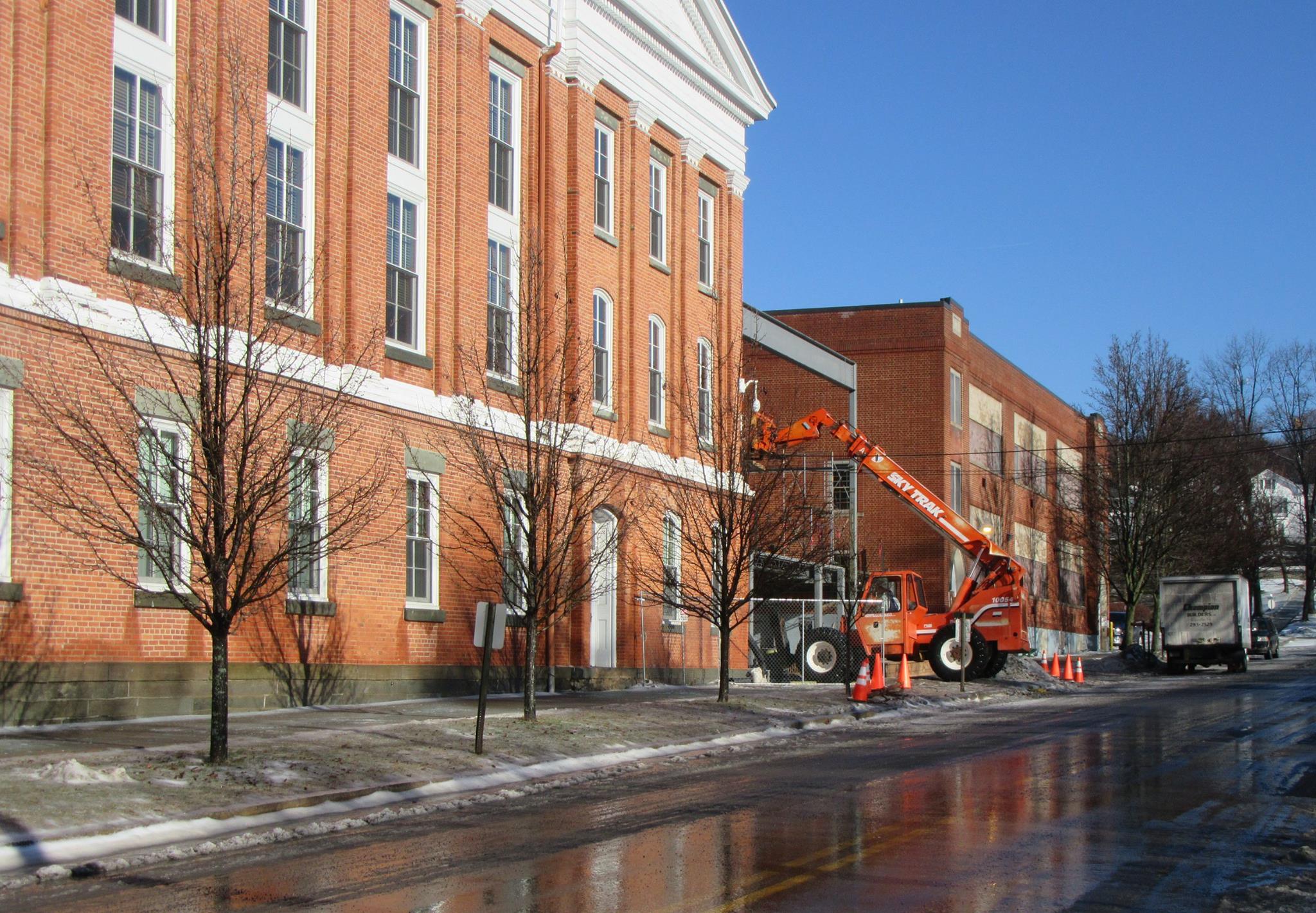 Johnson Controls account executive Nick Sracic (above, right) and Johnson East PA Market Team operations manager David Brunner (second from right) explain the process of bid solicitation by performance contractors to those in attendance at the Jan. 11 meeting of the Susquehanna County Commissioners. One of the last phases of a construction project that will reconnect three parts of the courthouse (top) in an ADA-compliant manner is expected to be finished this spring.

At the end of the regularly scheduled meeting of the Susquehanna County Commissioners on Wednesday morning, Chairman Alan Hall asked two representatives from Johnson Controls to respond to recent public criticism that subcontractors involved with the multi-faceted courthouse renovation project are not being properly vetted. In addition to explaining the state-accredited program and bid solicitation process, the company representatives also provided a time line for completion of the project.

“Some misinformed people are saying that what we’re doing isn’t legal and that we didn’t put bids out,” Hall related.

Account executive Nick Sracic explained that Johnson Controls was formally approved in May 2014 through a competitive process that began with advertising by the County Commissioners in March 2014.

“The public procurement piece was the contracting of Johnson Controls,” Sracic related. As a “performance contractor,” it is Johnson Controls’ responsibility to solicit, vet, hire, and coordinate subcontractors and to purchase supplies.

“We put the bid out for the performance contractor,” Hall concurred. “Then they work under state guidelines to solicit additional bids.”

This process, which both Hall and Sracic contend is closely audited by the state, saves municipalities significant time and money. It is similar in structure to the Commonwealth’s COSTARS program, through which municipalities can purchase vehicles, furniture and other supplies directly from companies that are already vetted by the state.

“The commissioners can still negotiate,” said Hall, noting that a recent purchase of furniture through the COSTARS program had saved the county thousands of dollars.

“It’s a lot different than it was 20 years ago,” Hall noted, in reference to a reduction in bureaucracy. “We’re getting a better bang for the tax payer’s dollar.”

Johnson Controls’ East PA Market Team operations manager David Brunner noted that the state does not require performance contractors to seek approval from the commissioners when soliciting competitive bids from subcontractors, but his company makes it a habit to do so. Municipal officials are involved with all facets of the project in part to ensure that no products or services are at odds with what the officials would want or expect.

“In this process, the county still has discretion,” said Sracic, who explained after the meeting that promising to keep the commissioners in the loop was part of his sales pitch.

Hall said that Brunner and his people routinely have meetings with the commissioners to review schedules to assure them that the project is on track. Another key assurance is provided by the state’s Guaranteed Energy Savings Act. Brunner is a certified LEED Green Associate, one of his priorities as an engineer is to produce a final product that is as energy efficient as possible.

“The other issue is that, if there are hidden costs, the county isn’t liable,” Hall noted, citing gross changes in the scope of a project as exceptions. Otherwise, he continued, “any overruns are eaten by the contractors.”

Installation of a new elevator that will allow wheelchair access to the varying levels of the three buildings that constitute the complete courthouse was a challenge, especially to Courtroom 2. “We weren’t sure that we could do it, but we did,” Brunner remarked, adding that the new elevator will be able to make eight stops in the course of three floors. The full depth of the elevator shaft, in fact, could not be calculated until the excavation was complete. Additional costs based on the final measurements were borne by Johnson Controls.

When asked for an estimated date of completion, Brunner suggested that work could be done along the east side of the building to allow for an opening of a new main entrance there by the end of April. The changes will greatly improve the ability of citizens with mobility issues to access all offices of the courthouse, including the Assessment Office and the Magistrate Office of Judge Jeffrey Hollister, which is currently in the old jail building at 17 Lake Street. Moving those offices could happen as soon as February and will be advertised.

A final phase of construction will be a fire escape and exit from Courtroom 2, which will cost approximately $100,000. The final design, Hall reported, will maintain the historic integrity of the courtroom while ensuring that it meets code. In a 200-year old building, Hall remarked, that is not easy to do.

On a final related note, Hall indicated that there has been no serious discussion about what might happen to the old jail building after the magisterial district office is moved. Several architects have looked at and commented about the building, but there is nothing yet in writing.

“Once we get the place vacated, we can go in and review it all,” said Hall. “It’s a matter of getting experts in and have them make recommendations.” It is Hall’s personal opinion, he added, that the structure is uninhabitable.

Commissioner Betsy Arnold concluded the discussion by thanking the public and courthouse employees for putting up with the inconvenience of more than two years of construction. After the meeting, she explained that the new entrance will be be adorned in Susquehanna County bluestone and be as aesthetically pleasing as it is useful. 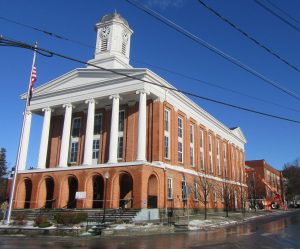